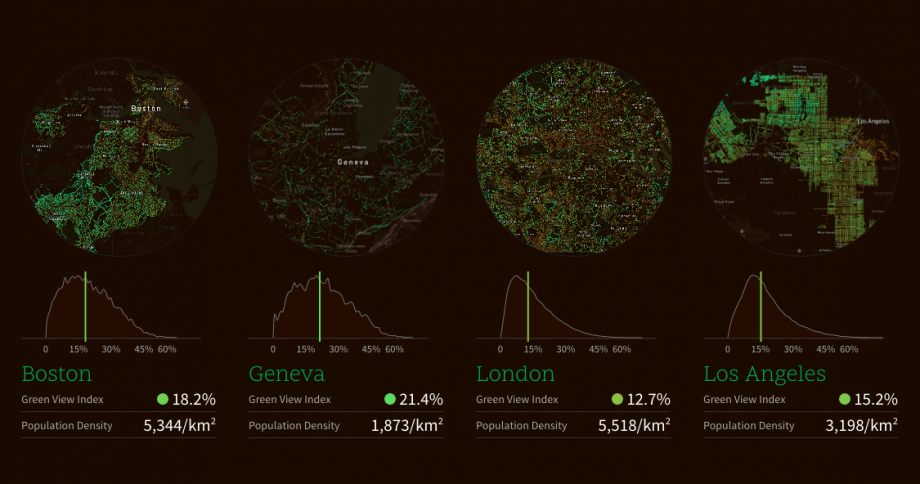 Out of 11 cities studied around the world, Vancouver beat out Seattle, Geneva, Tel-Aviv and others in a new measure of urban canopy developed by the MIT Senseable City Lab. The project, Treepedia, uses Google Street View imagery to measure urban canopies from a human level. Called the “Green View Index,” the measure presents the percentage of canopy coverage in a given area on a scale of zero to 100 by analyzing street view images for greenery. Vancouver scored an overall GVI of 25.9 percent, while Paris ranked a paltry 8.8.

“As many cities experience warming temperatures, increased storm frequency and continued air pollution, the well-being of our urban trees has never been more important. We present here an index by which to compare cities against one another, encouraging local authorities and communities to take action to protect and promote the green canopy cover,” said Carlo Ratti, director of the Senseable City Lab, in a statement.

Users can either view citywide tree coverage or zoom in to see individual data points and the street view images that prompted them. Future iterations of the platform will allow users to add information about urban trees, and to contact city officials to request new trees be planted in areas where they are lacking.

Treepedia was developed in collaboration with the World Economic Forum’s Global Agenda Council on the Future of Cities, which in 2015 included increasing urban canopy on their list of top 10 most essential urban initiatives. “Cities will always need large infrastructure projects, but sometimes small-scale infrastructure — from bicycle lanes and bike-sharing to the planting of trees for climate change adaptation — can also have a big impact on an urban area,” reads a statement.