Trapped Miners Provide a Peek at a Violent Subterranean Industry 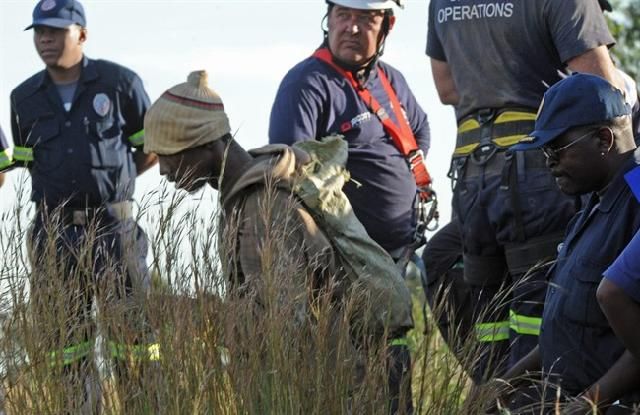 Initially loathe to be rescued, the illegal miners face up to three years in prison.

In a warren of tunnels deep beneath the surface of the earth, an ongoing war between armed gangs of gold miners is growing in intensity.

One skirmish in this battle surfaced earlier this week, when authorities began trying to extract a group of trapped men from a gold mine 20 miles east of Johannesburg, South Africa. The rescue mission was prolonged by an unusual snag: some of the miners stuck inside initially refused to be rescued, opting to remain underground rather than emerge and find themselves arrested.

That’s because the hole they were chipping away at wasn’t theirs. It’s an unused gold mine whose prospecting rights are owned by a company called Gold One International. The men stuck inside were mining it illegally, an increasingly common practice in South Africa since the global recession. As mining companies have downsized, their laid-off workers have resorted to breaking into abandoned mines, an extremely dangerous endeavor that’s been blamed for hundreds of deaths and costs the industry nearly half a billion dollars annually, according to the country’s Department of Mineral Resources.

The incident shed light on a problem that’s usually literally hidden from view — not only does the illegal mining trade sap the industry of profits, it’s rife with violent crime. The violence has grown so bad that while the trapped miners near Johannesburg refused to come out, the cops were equally loathe to go down and get them, fearing for their own lives. The miles of abandoned tunnels beneath the veld are roamed by rival groups of miners, often toting AK-47s along with their pick-axes. “If another group finds you underground they make you work for them at gunpoint, like a slave,” one illegal miner told the BBC. “So we go underground armed.”

The violence isn’t confined to miner-on-miner. At a standoff last year between illegal miners and the guards employed by the company that owned the mine, the workers below sent up a hand-written note filled with threats. “Together with your people we will kill each other,” the note read. “You must know that as from today if we can see one of Protea’s [the security company’s] members or any policeman underground we will fire with bombs and also the cage will be bombed.”

Police say that the miners near Johannesburg were robbed and then intentionally trapped by a competing group. (Their cries for help were heard by officials searching for illegal dumping). They were reportedly working for an organized crime syndicate, one of the cartels that “operate on a global scale… enticing locals and foreigners to get involved in illegal mining activities,” one expert told MiningWeekly.com. Yesterday, South African police announced a widespread investigation into these criminal syndicates, saying the miners that had been rescued were giving them information about the “kingpins” behind the operation.

Those criminal enterprises appear to be growing fast. In 2006, authorities arrested 475 illegal miners. In 2007 that number climbed to 757 and then to more than 844 in 2009. Authorities say those numbers have plateaued or even fallen a bit since then, but the problem persists, in part because the miners are mostly impoverished immigrants working out of desperation. The cycle of illegal mining won’t stop until the kingpins those immigrants work for are brought down. The Johannesburg miners, for their part, are mostly young men from neighboring Mozambique. They now face prison sentences of up to three years for their part in the operation. As for their rivals still down below, yesterday Gold One International dropped notes down the mine shaft, warning the men still inside that the exit will be sealed with cement in two weeks.