When City Hall Is Part of Transit-Oriented Development – Next City

When City Hall Is Part of Transit-Oriented Development 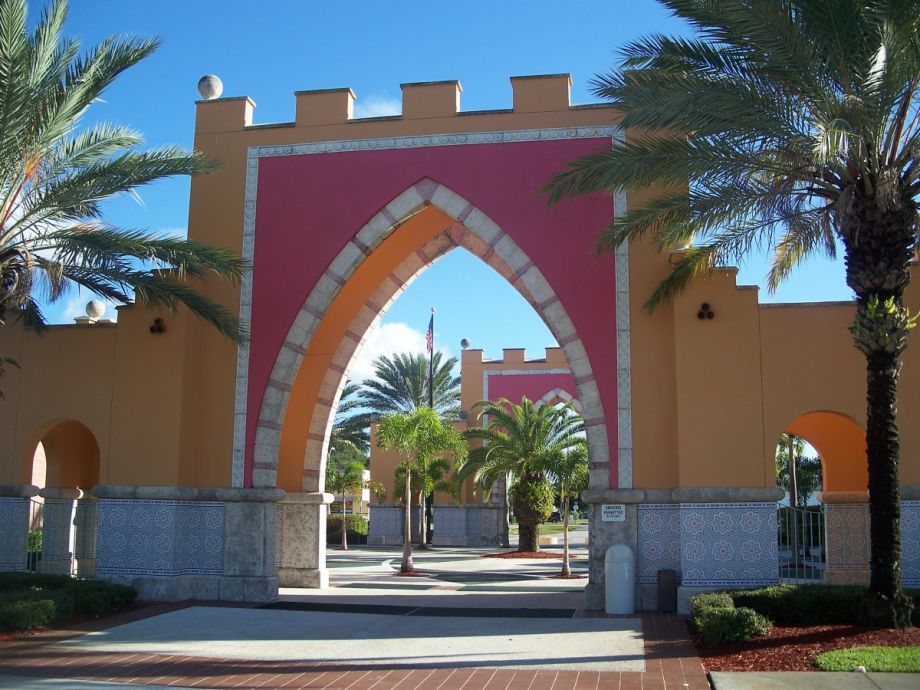 Opa-locka, Florida, was built in a Moorish Revival style, but city leaders are going modern with transit-oriented development. (Photo by Ebyabe)

Transit-oriented development is a trend hotter than Florida in July. But in an infrastructure epoch when terms like “value capture” and “investment leveraging” come easily to the lips of officials from Tucson to Tallahassee, there’s one thing you don’t often see: City offices practicing their own preaching and moving across town to take advantage of property values that will soon inflate.

That’s precisely what the city government in Opa-locka, Florida, wants to do.

Miami-Dade County’s Opa-locka, population about 15,000, has an odd history. Incorporated in 1926, it was developed by aviation pioneer Glenn Curtiss and architect Bernhardt Mueller in a Moorish Revival style, inspired by the stories in One Thousand and One Nights. Today, despite hurricane damage, the city still sports a number of buildings topped with turrets, minarets and domes.

According to a 2011 Community Redevelopment Plan prepared for the city, Opa-locka eventually developed a reputation as one of the most violent cities in South Florida, thanks to drug trafficking and high assault and murder rates in its nine-block Magnolia North neighborhood. Those high numbers are left over from the ’80s, the report states, but Opa-Locka still struggles with a “lack of business activity, slow job creation and low tax revenue” that “limit the City’s ability to invest in capital improvements.” In recent years, the city’s police force has also made national headlines for charges of brutality, excessive force and racial profiling.

Earlier this month, however, Opa-locka was the subject of a different kind of story.

“With an eye toward transit-oriented development, the City of Opa-locka acquired a strategic asset in its own Central Business District (CBD),” Jennifer LeClaire wrote on the real estate site GlobeSt.com. “JWV Florida Properties sold an 80,000-square-foot mixed-use asset to the city for $7.9 million.”

Those details are correct, says Assistant City Manager David Chiverton, projecting that the new HQ will save Opa-locka around $3 million. On the one hand, its value is expected to appreciate because, located near the Tri-Rail station, it’s in the heart of a recently created overlay district. And more connectivity is expected in the future: A Tri-Rail commuter train already runs through that station, but several lines expected to come through Miami, including a private high(ish)-speed rail line, could eventually connect those commuters with more of southeast Florida.

“The district has more flexibility for developers,” Chiverton says, explaining that the city changed zoning in the area to encourage mixed residential and commercial uses.

“It’s a perfect moment for us to purchase prior to values going up,” he says.

And the city also plans to take literal advantage of the district’s mixed-use designation, leasing out a majority of the building.

“There’s four floors — we anticipate only occupying about 40 percent of the property,” Chiverton adds. According to the GlobeSt.com article, the city’s new building has a ground floor built for retail.

The move seems like a smart financial strategy, especially considering Opa-locka’s history of constrained public funds. And it’s one that could be replicated by other cities — particularly small cities — trying to redevelop and re-centralize around their rails.

There’s no national database to indicate exactly how many municipalities are swapping shop or renting out as they remake their downtowns. Chiverton says that he’s not aware of anyone else doing so nearby.

But Meridian, Mississippi, did something similar when it built the Union Station Multi-Modal Transportation Center in 1997, though not directly as a public sector cost-saving strategy.

John Robert Smith, then Meridian’s mayor, now a co-chair of Transportation for America, says the city moved its community development offices into the facility. The city’s other offices were located near the hub in downtown.

“That was way before there was much talk nationally or in the South about multimodalism and TOD,” he recalls.

Smith also points to the city of Normal, Illinois, which he says included many of its city offices within the same walls as its multimodal facility when it went up. He adds that older cities often already have established city halls within their downtown core, located near historic transit hubs (and likely, already long-ago paid off). Decentralized cities that were built later are more probable candidates for a move.

But whether or not it makes sense as a cost-saver, Smith says that being centrally located is a good long-range strategy for city offices.

“If we’re expecting the private sector to move in, then the public sector has to be the first to maintain its presence in the downtown,” he says. “We talk a lot about PPPs, but the truth is that the public sector always needs to go first.”