Transit Future Is a Construction Industry Dream, But Should It Be Chicago’s? – Next City

Transit Future Is a Construction Industry Dream, But Should It Be Chicago’s? 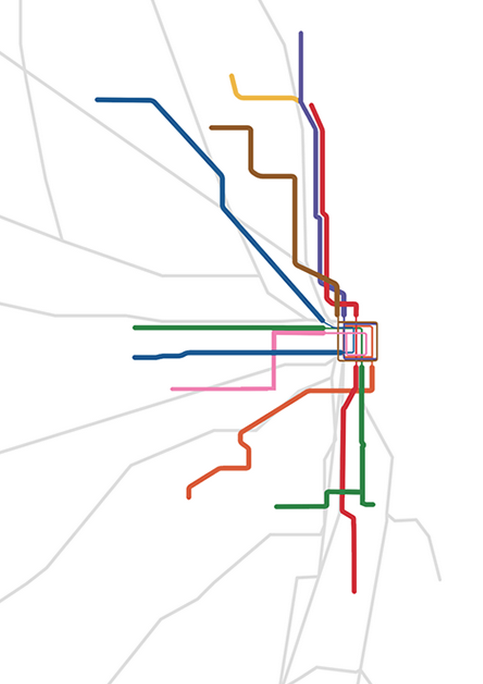 Fantasy rail maps are all over the internet. You can find subway maps of New York with not only the Second Avenue line, but also feeder lines in Brooklyn, Queens and the Bronx. You can find a subway beneath Geary Boulevard in San Francisco, and you can take Metro from Georgetown to H Street in Washington, D.C.

Chicago also has a new fantasy transit map, but one with friends in powerful places. Backed by nine of the 17 Cook County commissioners, real estate and transit vendors, labor unions and a bevy of community and civic groups, Transit Future’s plan (get ready to scroll) isn’t particularly likely, but it does have some big names behind it. Mayor Rahm Emanuel and Cook County Board President Toni Preckwinkle showed up at the unveiling of Transit Future, an effort led by the Center for Neighborhood Technology and the Active Transportation Alliance.

The flashiest parts of Transit Future’s plan are the elevated extensions into Chicago’s outlying areas and rather sparse suburbs. The airports get a bunch of new lines – Midway gets access to the new Lime Line, O’Hare gets a Brown extension and both of them are connected by the new Ace Line (“Yes, really,” Transit Future writes – which doesn’t answer my question: why?). The Metra Electric line is integrated into the L network as rapid transit, and all of the suburbs get beefed-up arterial bus networks, with modern vehicles with priority at lights but no dedicated lanes.

The map would no doubt make for an incredible future. But like most fantasy maps, it suffers from an emphasis on newly-built lines and a lack of concern to the under-utilized parts of Chicago’s vast existing network of railroad lines. Not only does the $20 billion (to be funded by a countywide tax, as in Los Angeles) plan seem unlikely, but it seems like overkill in many parts and not a particularly effective use of what are likely to be much scarcer funds.

Others have already criticized the L extensions into suburban areas that likely don’t have (and won’t ever allow) the density to support rapid transit. Is Oak Brook – a village in DuPage County marked by highways and culs-de-sac, with a population density that fell nearly 10 percent from 2000 to 2010 to below 1,000 residents per square mile – really a suitable candidate for the same level of transit infrastructure as Lincoln Park? And why would the city’s busiest bus line, on Ashland Avenue, not be upgraded to rail-based rapid transit while sparser Cicero Avenue would get its own elevated train line?

But what also worries me is the lack of concern for Chicago’s formidable existing transit assets. The map’s authors show some concern with existing rapid transit lines (the Red, Blue and Purple lines are modernized in Transit Future’s transit future), and the Metra Electric line through the South Side and beyond is singled out for upgrading to rapid transit standards. But beyond that, the only other pieces of existing main line rail infrastructure mentioned are routes that, like the Union Pacific’s line to Chicago Heights and beyond, see dozens of pesky freight trains each day and don’t currently host commuter rail service.

A countywide sales tax must hold out the promise of better transit throughout the whole county, including the sparse suburbs, to win support, but the service doesn’t have to be in the form of expensive new lines. In fact, it could reach a much larger constituency if it focused on the already-built network of mostly at-grade lines that radiate out from the city. Chicago rose to prominence as a national rail hub, and as such has a huge surfeit of suburban rail infrastructure relative to the amount of transit service that Metra currently provides.

But many existing Metra routes, which would be much easier to bring up to rapid transit standards than the freight-only UP line, go unmentioned. In addition to the Metra Electric District line, Metra (or its Indiana counterpart) also already owns most or all of the two Milwaukee District, the Heritage Corridor, the North Central Service, the Rock Island District and South Shore lines. This gives it a dense thicket of suburban railways, currently carrying more than 100,000 riders each weekday, but which are woefully under capacity and which Metra could electrify and improve at a much lower cost than the newly-built L extensions proposed by Transit Future. And some of the lines that Metra doesn’t own, like the Union Pacific’s North Line through the tony northern suburbs, see little to no freight traffic, making them prime targets for acquisition and upgrading by the Chicagoland commuter rail operator.

Improving service, though, is not as sexy as new lines. It would, in addition to electrifying suburban lines and building level boarding at their stations, anger the transit unions by cutting conductor positions in order to make frequent, all-day service less costly, as the old Illinois Central tried to do with what is now the Metra Electric line before they went bankrupt. Improving existing Metra service just doesn’t please many of the non-rider constituencies that American politicians perceive as necessary to win support for transit projects.

The construction unions that endorsed Transit Future’s plan, for example, wouldn’t get as much out of a plan that focuses on upgrading the regional rail network as opposed to building new elevated lines, nor would private-sector architecture and engineering endorsers like Skidmore, Owings & Merrill and Perkins+Will. The politicians who backed it could promise better transit service, but not the jobs that come with expensive construction projects or the ribbon-cutting ceremonies that come with new lines.

Nothing is likely to come of Transit Future’s plan, but it’s worrying as an embodiment of what Chicago’s city fathers think is the future of public transportation. Every day they dream of rapid transit extensions out to low-density suburban areas like Oak Brook is another day that the hard but inexpensive work of making better use of Chicago’s existing network is put off.