Inside the Philadelphia Plant Where Trains Are Made – Next City

Inside the Philadelphia Plant Where Trains Are Made 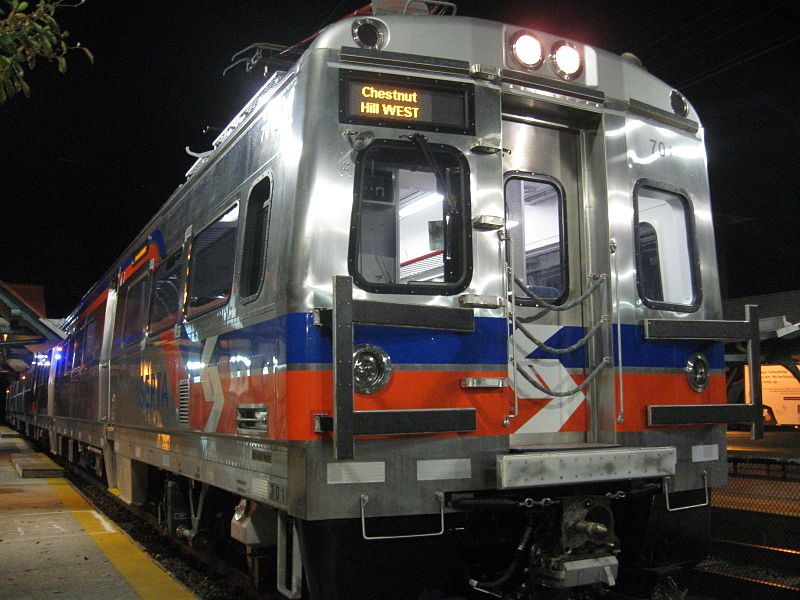 With sleek silver bodies and well-lit white interiors, Philadelphia’s new Silverliner V train cars look like they belong in a different city. Yet the 120 trains glamming up SEPTA’s beleaguered system not only belong to the City of Brotherly Love — they were manufactured here, too.

One would have to search out the unassuming facility to see where SEPTA’s first major load of new train cars since the 1980s gets made. The Hyundai Rotem factory and stateside headquarters sits hidden on a South Philly backstreet, not far from IKEA and the towering pillars of the elevated Delaware Expressway, and close to famed local diner-dive John’s Roast Pork.

Hyundai Rotem, well established in East Asia and Western Europe, was lured to Philadelphia in 2006 by the contract with SEPTA, a sizable one for a company still establishing itself in the American market. In the intervening years, more and more global manufacturing companies have made similar moves as U.S. cities increasingly begin expanding and upgrading their transit infrastructure. (For more on this trend, read Nona Willis Aronowitz’s Forefront story, published on Monday.)

Today, the almost 300,000-square-foot facility is packed with railcars in various states of assembly, all marked with the emblem of the Massachusetts Bay Transportation Authority (MBTA), the first post-Silverliner order. The 75 double-decker MBTA cars are expected by April 2014, while a 56-car order headed for Denver began production in September.

It’s hard not to feel a jolt of wonder watching trains get built. They begin as empty shells at the northern edge of the facility, and then follow a production line that snakes through the plant, as everything from toilet modules to electrical wiring is installed. They then proceed to what appears to be an incongruously placed car wash, where they are blasted with water at varying degrees of intensity — up to hurricane force — to test leak-proofness.

A private rail line outside the plant allows for test driving at speeds up to 35 miles an hour and, when complete, means that finished cars can be delivered without ever touching pavement. The $120 million factory aims to turn around between four and six cars a month.

The floor hums with activity, as clusters of men joke and talk shop with each other over their stations. (There are only three women in Transportation Workers Union Local 234, which represents a majority of the shopfloor workforce). A few wear T-shirts emblazoned with the words, “Workers’ Rights Are Human Rights.”

The T-shirts are there for a reason. A gig at the Hyundai Rotem factory represents a rare opportunity for a well-paying manufacturing job in a region that’s seen a long, gradual decline of such positions, with hundreds of thousands lost between the industry’s mid-century peak and the year 2000. While hemorrhaging has bottomed out to some degree, another 64,023 jobs were lost between 2002 and 2011 in the Philadelphia-Camden-Wilmington metro area. In 2011, manufacturing jobs represented a scant 8 percent of the total private jobs in the region, compared to 12 percent in 2002. Philadelphia itself, the fifth largest city in the country, is now home to only 807 manufacturing businesses employing 23,651 jobs, down from 1,251 employing 38,013.

These jobs on average pay better than those of the region’s largest employer, the educational and health services industry, with a high of $80,297 in Delaware County to a low of $55,187 in Philadelphia.

Ivan McNeil, a TWU shop steward and one of 250 workers at the factory, arrived there by chance. He was back at his old school to collect transcripts and was offered an aptitude test. “I came here by accident,” he said. “I just took the test and they called me and I said, ‘well, what’s available?’ And they told me building trains. Who doesn’t want to build trains? That’s one of the things you do as a little kid. That’s a dream job.”

What’s more, McNeil’s dream job is secure. The plant’s schedule is packed for the foreseeable future, according to Andy Hyer, marketing and business development manager for Hyundai Rotem. And while the company hasn’t yet broken into the New York market, Hyer has his fingers crossed that the factory’s close proximity to that northward city bodes well.

While the plant’s outlook is strong now, things weren’t always so sure. Manufacturing began in 2010, but delays meant that the final cars weren’t delivered until this March. Earlier this year the Philadelphia Inquirer reported that the MBTA threatened to sever its contract due to similar delays.

“Nothing is ever smooth when you are first beginning,” McNeil said. In fact, you could say the plant had two beginnings, as the largely Korean management confronted language and cultural barriers when it first opened, and then it underwent retraining and remodeling during the transition from the SEPTA to the MBTA project.

“Working with a manufacturer who has not built vehicles in the United States before involves a considerable learning curve,” said Kristin Geiger, a SEPTA spokesperson. Workers also needed to be trained in rail car manufacturing, an industry that hasn’t had much of a regional presence in decades.

Despite the slow start, Hyundai Rotem is bullish enough on the potential to do more work with SEPTA. It’s lobbying for state transportation funding that would allow the cash-strapped transit agency to invest in new rail fleets.

The company is placing special emphasis on the additional 3,000 to 4,000 Pennsylvania jobs Hyer said it has supported through $150 million in contracts with 21 Pennsylvania-based sub-suppliers. Such an argument should theoretically turn heads in Harrisburg, where politicians ceaselessly talk of their commitment to job creation. But the transportation funding continues to sit in legislative limbo. It will probably take a while before McNeil and his co-workers build another SEPTA car, despite the fact that the agency badly needs to replace almost every rail car in its fleet that isn’t a Silverliner V.

This article has been updated since publication.