Tracking Sickness Through a Cellphone – Next City

Tracking Sickness Through a Cellphone 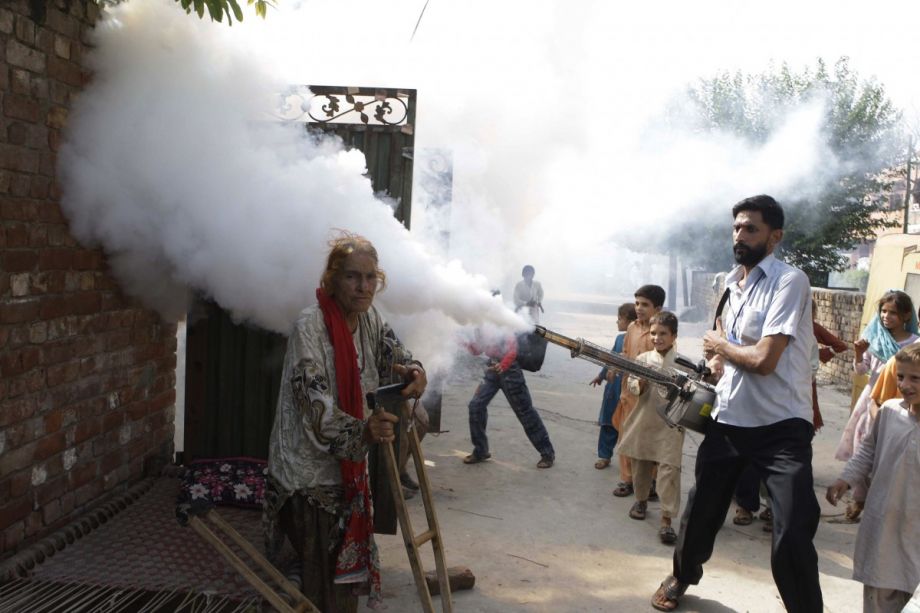 A Pakistani health worker fumigates the area to kill mosquitos and to prevent an outbreak of dengue fever in Lahore. (AP Photo/K.M.Chaudary)

Dengue hit me like lightning: One day I was a little tired, the next day, asleep for almost 23 hours. Without energy to find a thermometer, I couldn’t tell my fever apart from the standard overheating of the South Asian monsoon season — but the pain I felt upon waking made it obvious this was no simple nap. Recalling the coughs, typhoid and malaria of my previous tropical travels, I knew the intensity of dengue fever would surpass them all.

My case of dengue fever — a disease traditionally known as “bonebreak fever” for the pain it causes — was just one of the 50 million that occur each year. Spread by the Aedes aegypti subspecies of mosquitoes, the disease is common across Asia (where I contracted it), the Pacific Region and South America. For most sufferers, the infection also causes fever, a spotted rash and restlessness. In half a million cases, it also gives rise to the potentially deadly complications of hemorrhagic fever or shock.

In Karachi, a metropolis of 24 million in southern Pakistan, you don’t have to be a doctor to know that the mosquito-borne illness is linked to poor living conditions. (An impoverished neighborhood near the harbor is named “Machar,” the local word for “mosquito.”) But a team at Harvard’s School of Public Health has established a more precise method of predicting outbreaks — by linking mobile phone data to human carriers of the disease.

Climate change and the movement of people has made mapping the spread of infections more necessary in Pakistan. Dengue spreads when a mosquito bites an infected human and then bites an uninfected person. In the last few years, increasing temperatures have led to mosquitoes breeding farther north in the country, in areas formerly too cold for them to survive. Now, when infected people move, they can encounter mosquitoes that will spread their infections to people who previously had not been at risk. Now, tracking people allows researchers to watch the spread of dengue infection.

The Harvard researchers started with a data set that documented dengue cases in Pakistan during a large outbreak in 2013 — one of the first ones since dengue started spreading northeast in 2011. Working with telecom company Telenor, they accessed (anonymous) phone records for nearly 40 million people. Then they traced the movements of the estimated 710,000 people traveling in and out of dengue-afflicted Karachi each day, using phone tower data that showed where cellphone users placed calls. As people from Karachi traveled toward Lahore and Mingora, the team predicted when dengue epidemics would begin in those two northern cities and then tested their model against real data from the epidemic.

The upshot? A tested model that allows prediction of when an epidemic will begin and the number of cases of dengue virus a newly exposed population might experience.

While a prediction system could be helpful during outbreaks of many infectious diseases, this innovation might be particularly powerful for dengue. The disease has no vaccine and little treatment, making a warning system the main form of protection that could exist for dengue.

Head researcher Caroline Buckee admits that omissions of people without phones could be an important limitation on data accuracy. That said, however, she emphasizes that “Telenor had very wide coverage across the country, and from a demographic point of view, we found they had a pretty reasonable representation across socioeconomic and demographic groupings,” allowing for enough accuracy to protect whole cities at risk.

One notable limitation, Buckee says, is that the biology of dengue is not understood well enough to allow for accurate predictions of who will experience rarer secondary infections. Dengue virus comes in four subtypes. Most people infected for the first time experience a painful but non-serious infection, like mine was — and then develop immunity to the subtype that infected them and perhaps, with luck, some immunity to the other three. But in some cases, the infecting subtype triggers an immune response that can increase the person’s vulnerability to severe, life-threatening complications. If a secondary infection (from one of the other three subtypes) strikes that person, he or she can experience potentially deadly dengue hemorrhagic fever or dengue shock syndrome. Even more alarmingly, babies can inherit components of their mothers’ immune system responses, so vulnerability to severe secondary infection may exist from birth.

Lacking information on what subtypes that infected people, “we took the simplest approach and assumed each population was immunologically naïve,” the researchers write in the study.

“In places that are previously dengue-free … we do our best job,” Buckee says. “In Mingora, that’s when we had our most accurate predictions.”

In Lahore, the team used its model to predict the outbreak in 2013 — but found that the real data showed it took longer to develop than they had thought. This was because the city had undergone a large outbreak in 2011 (a time period otherwise not included in the study), Buckee says: “We think we were seeing the effects of both immunity and then probably secondary infections in the data.”

Modeling immunity of whole populations over time could help enhance the model, Buckee says. She adds that knowing more about the biology of the virus would eventually improve the ability to predict and manage outbreaks.

As changing environmental conditions move the disease risk from urban neighborhoods named after the most deadly insect on Earth to wholly dengue-naïve cities, predicting outbreaks could become a powerful form of assistance. In theory, allowing people to take precautions against dengue will reduce the chances they’ll suffer a secondary infection with deadly complications.

After experiencing just the run-of-the-mill primary infection — which still outranks all other infections of my life for the sheer misery it created — I’d say that’s a very powerful protection indeed.