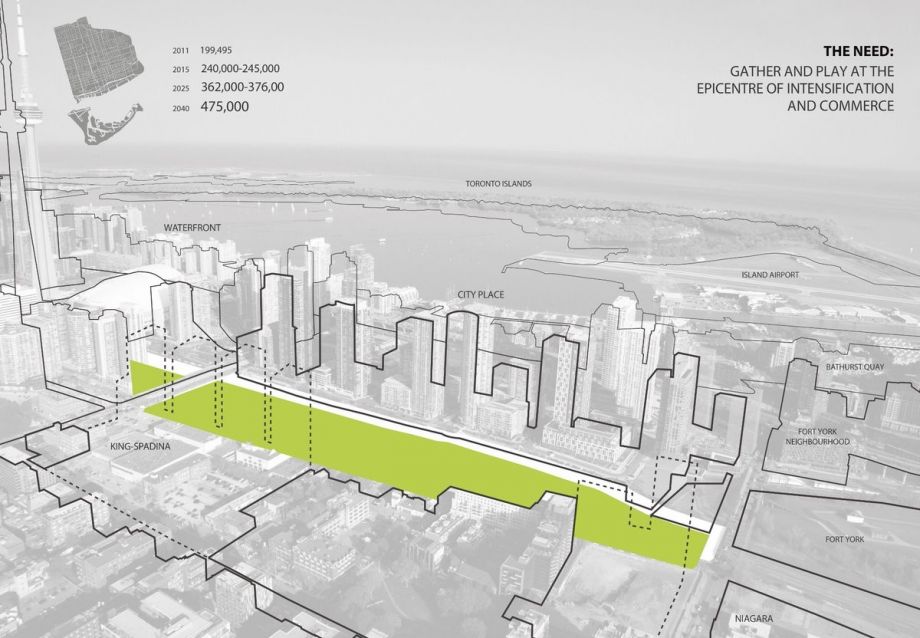 A rendering of the proposed park (Credit: City of Toronto)

Two neighborhoods adjacent to the rail yard, King Spadina and City Place, had only a combined population of 1,000 residents in 1996, according to Urban Toronto. Over 40,000 people live there today, and 30,000 more are expected to join them over the next decade. But the city’s chief planner, Jennifer Keesmaat, says downtown has the smallest amount of parkland in the city.

“As our city grows, we need to be creative about how we create public spaces,” said Council Member Joe Cressy, who joined the mayor for his announcement. “We need to ensure we’re building neighborhoods, building communities, not just building towers.”

While the Rail Deck Park has no clear timeline or budget yet, a preliminary outline prepared by landscape architecture firm Public Work compares the project to existing parks in Toronto and elsewhere. Chicago’s Millennium Park, which Mayor Tory says the city wants to model Rail Deck Park after, cost $33 million per acre. That park is also a cap of sorts, built above an underground parking garage. Architects have proposed similar designs for highways, including one for Seattle’s Interstate 5. The tracks below Toronto’s park would also remain operational, and the city would need to secure air rights from Toronto Terminal Railways. Toronto is hoping to source some of the necessary funding from Ottawa and the provincial government. Tory also said the park would complement another large urban park being built beneath the Gardiner Expressway.

“[Parks] are what make our city livable, enjoyable and sustainable,” said Mayor Tory. “People will be able to gaze at the skyline on the one hand while enjoying the feeling of grass under their feet in one and the same place.”

The mayor’s executive committee will consider the project in September and come up with a plan for public comment.