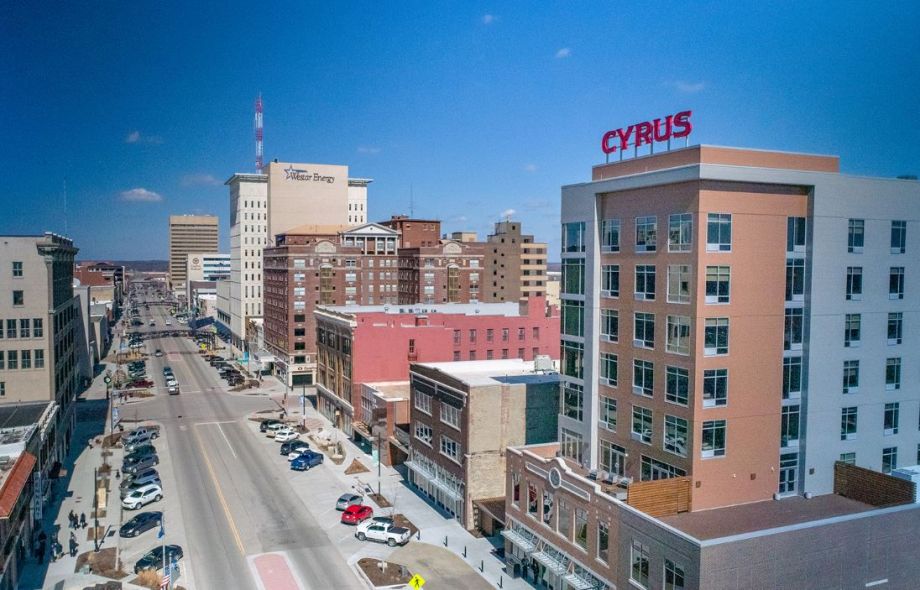 By March 21, only four days into Kansas’ statewide ban on gatherings of more than 50 individuals in a single area as part of efforts to slow the spread of the COVID-19 virus, Matthew Pivarnik was already fielding call after call from Topeka businesses seeking assistance.

Pivarnik is president and CEO at the Greater Topeka Partnership, an umbrella agency for the Greater Topeka Chamber of Commerce, the local tourism bureau, a local nonprofit that makes small business loans and other related entities. One of the calls Pivarnik took that Saturday was from Scott Hunsicker.

Born and raised in Topeka, Hunsicker is the owner and president of Kansas Financial Resources, an investment, wealth management and insurance firm he founded 37 years ago, serving business owners and others in and around Kansas’ fourth largest city. Pivarnik assumed Hunsicker was seeking assistance, but instead Hunsicker called with a plan he’d hatched in conversations with friends and colleagues over phone calls, emails and glasses of wine the previous few weeks and days.

“We were talking about how do we help some of these businesses hurting because of this, and it struck us before I called Matt, maybe we hit a double and not only get money but help the people hurt by this,” Hunsicker says. “So I called and told Matt, we could raise maybe a couple hundred thousand dollars and get gift cards or gift certificates from local businesses and give them to people who filed for unemployment recently. And I got greedy even, and said to Matt, maybe the public sector could do some match funding.”

Pivarnik called back an hour later with an answer — yes. While exact implementation of the program continues to evolve, currently the private dollars from Hunsicker’s network and other business owners in position to donate are being used to buy gift cards from local businesses. Each recently unemployed worker can expect at this point to receive $250 in gift cards. The public dollars would come later, through a grant application process to provide medium-term support for businesses in need of assistance.

By Monday, April 6, they had raised $481,000 in private funding and gotten $1 million approved from joint city/county economic development funding for what they’re calling “Helping Others Support Topeka” or the HOST Relief Program.

“Small businesses are the lifeblood of any town. If you don’t take care of any of those, you can’t bring the big ones in,” Hunsicker says. “That’s kind of how this deal culminated, let’s try to help businesses and get stuff in the hands of people who need it most.”

Pivarnik is still counting on more aid coming for small businesses in Topeka from the $2.2 trillion CARES Act and other sources.

In addition to the $349 billion Paycheck Protection Program, which is still being rolled out, the CARES Act appropriated emergency funding for $5 billion in Community Development Block Grants, $1.5 billion for the U.S. Department of Commerce’s Economic Development Administration, and $139 billion in emergency budget support directly to states and local governments. While details are not yet available, the CARES Act even gives the Federal Reserve the authority to create some type of financing mechanism to further support small business lending to get through the economic disruption from COVID-19.

While awaiting those dollars to start flowing, Pivarnik says his staff and local elected officials are energized to be building something that can help not just in the immediate short-term but also in the longer term, and that they’re building something that intends to simultaneously help both local businesses and the unprecedented wave of suddenly employed workers facing Topeka.

There’s a lot of details still being worked out on the fly.

Hunsicker and his connections are spearheading the fundraising effort, and people are stepping up even as they face uncertainty of their own. “Right now with this COVID-19, it’s affecting a lot of my customers,” Hunsicker says. “Everybody’s net worth is not what it was like at the beginning of the year. But I’m a positive person, I’m willing to bet on what’s to come.”

Pivarnik is using his platforms at the Greater Topeka Partnership to line up businesses in need of assistance as vendors within the relief program. Businesses do not have to be a member of the Greater Topeka Chamber of Commerce in order to be eligible for support — an intentional choice to be as inclusive as possible. They’re also taking feedback from those who donate private dollars — they can’t pledge specific dollar amounts to specific businesses, but they can point out examples of businesses in the community that they might view as important to keep around.

Pivarnik says one donor pointed out a well-known Dairy Queen, a franchise whose owner lives in the area, and it’s got outdoor seating. “He said he and his wife like to go there and they thought it would be good for folks who have kids at home from school to have something they could do that’s outside,” Pivarnik says.

A newly formed HOST Relief Action committee will be charged with evaluating all businesses in Shawnee County and ensure that privately donated relief is distributed “in an equitable process.”

Four businesses have already had gift cards purchased through the initiative — three restaurants — Blind Tiger Brewery, Skinny’s Bar and Grille, and Tortilla Jacks — and a florist, Bloom on Boswell. The gift cards will be distributed later to recently unemployed workers.

“I’ve had several small businesses reach out to me and say they might not even see a dime of this money but they are just encouraged to see that someone is thinking about them,” Pivarnik says. “One of them said to me just knowing that has helped them decide to [stay in business] through all this.”

Meanwhile, details are also being worked out on distribution. Pivarnik says they ran a “simulation” with the unemployment office to see what it would be like to take $5,000 worth of products and services and try to match that with ten or twenty recently unemployed workers who would want those products and services. But that was before the unprecedented wave of unemployment claims filed over the past two weeks.

With the unemployment office itself now swamped and having to focus just on ramping up its normal operations, Pivarnik’s team initially set up a way for the unemployment office to notify Pivarnik’s team of which businesses have had the largest reductions in their workforce, so that Chamber of Commerce staff could reach out through those businesses. Now, the HOST Relief Program has set up an online application for businesses who have released workers to submit their names for gift card relief. Greater Topeka Partnership staff are working with business owners to distribute the gift cards through the employers, or mail the cards directly to workers. Over 700 displaced workers have been submitted to the program to date, representing 40 Shawnee County employers.

UPDATE: We’ve updated some information about how the gift cards are being distributed after getting some late-breaking information from the HOST Relief Program.