Tokyo Building Enormous “Super-Levees” to Hold Back Its River 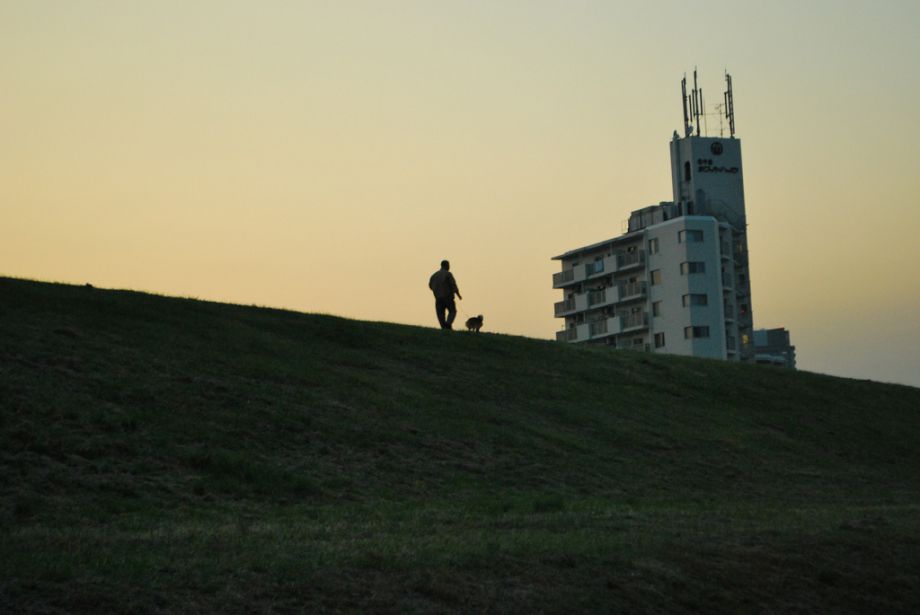 A man walks his dog along one of the river’s current 10-meter embankments. Photo credit: “nakimusi” via Flickr

When August came to Tokyo in 1910, it began to rain unusually heavily. Between August 8 and 10, almost 400 millimeters of rain fell in the Chichibu Mountains to the west of the city. It rushed into one of Tokyo largest rivers, the Sumida, and sped down the nearly 1,000-meter vertical descent from the mountains to Tokyo Bay. By the time it reached Tokyo Metropolitan Area the deluge had become a flash flood, which burst levees and turned the residential and commercial heart of the city into “one vast murky sea,” according to the Arakawa-Karyu River Office.

The damage from the flood was enormous, equivalent to 4.2 percent of Japan’s gross national income at the time, affecting nearly 1.5 million people and flooding 270,000 homes. This financial burden prompted the national government to draw up the Arakawa River Improvement Scheme, Tokyo’s first modern large-scale defense against flooding involving the epic construction of a second river, 500m wide and 22km long built between 1910 and 1930. This man-made channel directed waters away from the Sumida and was named the Arakawa. To protect against a flood of similar proportions the Arakawa featured sluice-gates and a 10-meter embankment along the river, to contain floodwaters.

Today, those measures aren’t considered nearly protective enough. In fact, in 1986 the government suggested that a large flood would result in significantly greater losses than it would have in 1910. The old “10-meter-high levees along the river now cannot guarantee total protection,” says a brochure produced by the Arakawa-Karyu River Office. Tokyo predicts that damages from a similar flood today could cost up to 35 trillion yen. And so, in 1987, the River Council put forward a radical new solution to protect the lower 58.2 kilometers of the river with a series of “super-levees.” These mega-structures would elongate the existing levees by a factor of 30, integrating a massive 300-meter-long levee with residential, commercial and public spaces along the river. This effort to incorporate apartments, shops and offices into levee design is the first of its kind in Japan, and a groundbreaking new way of thinking about urban flood protection.

A sports festival is held on the banks of a standard Arakawa embankment. Photo by jetalone. Under a Creative Commons license. Photo credit: Hajime Nakano via Flickr

The plan dictates that the current 10-meter-high embankments will remain, but their slope will change dramatically. The ground is to be raised by up to 15 meters to meet the current levee height before gently sloping downward. This way flood waters will flow gradually onto and away from the levee without breaking it. The super-levee will be an enormous piece of infrastructure fully integrated into a rebuilt community. The idea of using flood-control infrastructure for a range of purposes “emerged to make effective use of the facilities under normal conditions rather than using them only in less frequent events of flood,” says Jun Inomata from the National Institute for Land and Infrastructure Management.

The Arakawa is used by both commercial and leisure vessels. In the background is the grass-covered 10-meter high embankment. Photo credit: Marufish

Building such a structure in one of the world’s densest cities is a drawn-out dance between urban planners, policy makers, various governmental departments, earth-moving companies and local communities. Currently only 2.26 kilometers of the upgrades have been completed across nine sites, with another 6.25 kilometers underway across a further six sites. But this is only 15 percent of the total length the Arakawa-Karyu River Office has planned to upgrade, and each meter is hard earned. The super-levees will disrupt dense, tightly knit communities, public facilities and commercial zones. These communities will be given payouts to relocate for up to four years while the super-levees are constructed, as the entire built environment around the super-levee sites is demolished and the ground level raised with “safe soil,” which is resistant to earthquakes and liquifaction. The amount of earth required for the construction is monumental – the city is effectively building a small mountain along the Arakawa, running right through the heart of the world’s largest city. 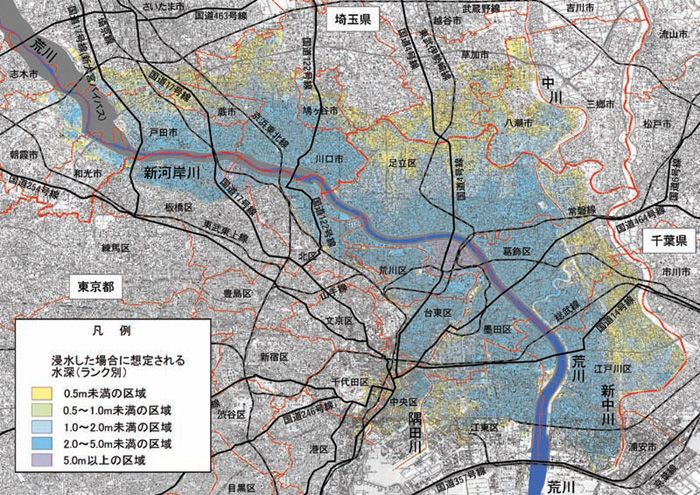 Anticipated inundation map of the lower reaches of the Arakawa. The blue and purple marks indicate subsidence of up to 5 meters. Courtesy of Ministry of Land, Infrastructure, Transport and Tourism.

Once completed, the super-levee will provide a view of the river to the people atop it, a view that was previously obscured by the 10-meter embankments. The area will be given an “urban facelift” as power lines are buried and space is given over to parks and sidewalks. New apartment buildings will replace the dense housing, and previous residents of the area will be offered subsidies if they wish to move into these complexes. At present, eight of the fifteen super-levees completed or under construction are for residential use.

Under existing conditions, if the Arakawa were to overflow or break its embankments, the event would trigger a number of interconnected disasters. According to Nobuyuki Tsuchiya, Director General of Public Works in Edogawa City, about 27.4 square kilometers of Tokyo are below sea level beside the Arakawa. Up to 2,000 people could be killed and 860,000 stranded. The Arakawa-Karyu River Office fears that “key functions” of not only Tokyo, but Japan as a whole, could become “crippled… the effects of which could be felt worldwide.” 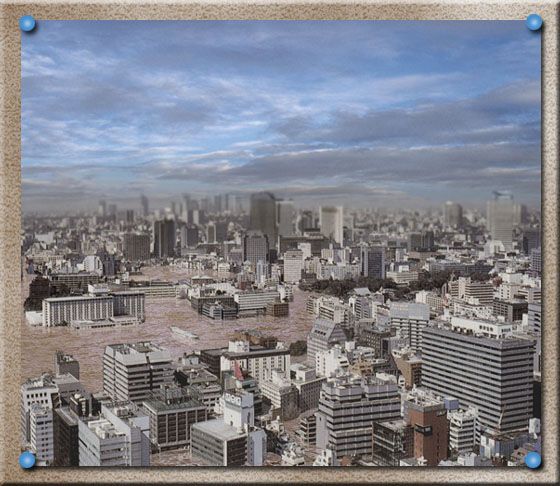 A rendering of Tokyo inundated by floodwaters after a levee breaks. Courtesy of the Ministry of Land, Infrastructure and Transport.

This sort of catastrophe is what the Arakawa-Karyu River Office seems eager to portray, instilling a sense of urgency around the project through frightening public service announcements. Cartoon characters like the 300-meter-long crocodile “Arazo-kun” represent the levee, and the “Super-Levee Guidebook” explains to residents why the project is necessary with renderings of the current embankments bursting and deluging the city with deadly floodwaters, set beside bucolic images of high-and-dry buildings and green spaces atop the newly built super-levee.

But the accuracy of such images isn’t entirely certain. The super-levee project is so huge, so expensive and designed for a disaster so unexpected that it would be irresponsible not to ask whether the system is actually necessary. The development of the Arakawa River has been synonymous with corruption for almost as long as Tokyo has existed. Supposedly Tokugawa Ieyasu, the founder of Shogunate in Edo, the original city of Tokyo, was more concerned with creating a secure channel to transport his annual tributes (in the form of barley and rice) than he was with disaster mitigation. Almost 400 years later, writer Alex Kerr describes how little has changed. In the casually vitriolic opening chapter to his book Dogs and Demons: The Fall of Modern Japan, he shows that money — not safety or disaster planning — is still the driving factor when it comes to river improvement. Kerr says Japan has “a systemic addiction to construction” where “government subsidy” rather than real “infrastructure need” drives development.

A view of the Arakawa by night. Photo credit: Kyle Hasegawa via Flickr

The super-levees, as one of Tokyo’s most ambitious river projects, are most likely colored by both government planning gone awry and a well-documented history of flooding. But that doesn’t mean that rivers like the Arakawa aren’t a threat to the city, as the 1910 flood showed. The real question is, at what point can a city say it has mitigated disaster enough? In Tokyo, it can be hard to untangle where resilience ends and fraud begins.