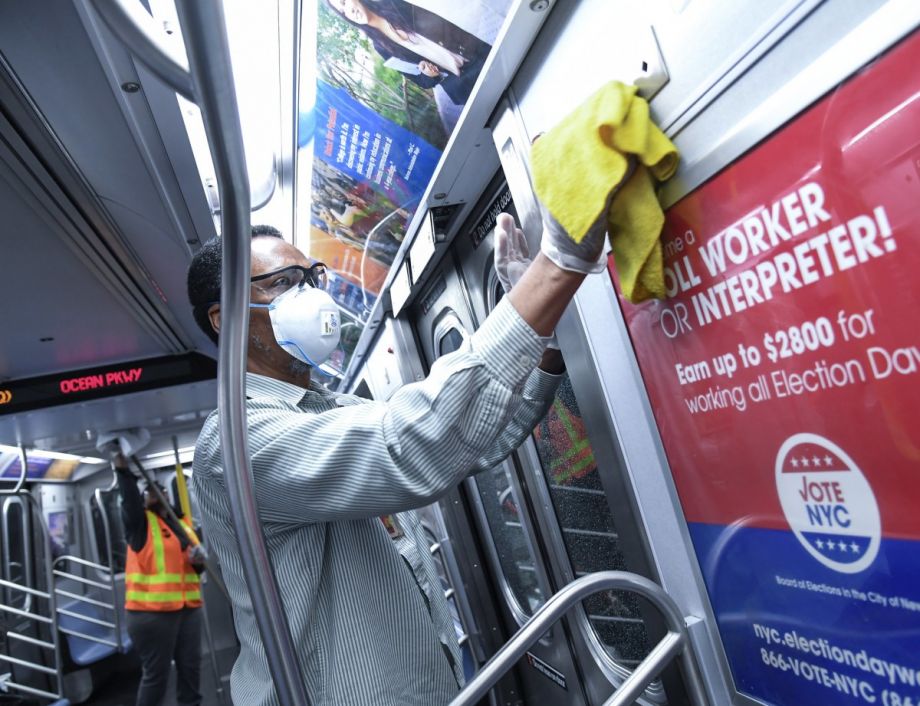 MTA New York City Transit personnel perform disinfectant sanitization aboard an R-160 train in the Coney Island Yard on Tue., March 3, 2020, as a precautionary measure in response to the novel coronavirus (COVID-19). (Photo by Metropolitan Transportation Authority of the State of New York; Marc A. Hermann / CC BY 2.0)

For those of us who grew up in drive-everywhere cities, getting one’s driver’s license was a teenage rite of passage. And part of that rite involved learning the rules of the road for safe driving. One of those rules involved maintaining enough distance between cars to avoid a rear-end collision in the event of a sudden stop. That rule of thumb said drivers should allow one car length for every ten miles per hour of speed.

Now, in the time of COVID, there’s a similar rule for people in general: allow six feet, or two meters, of space between yourself and the next person to prevent the spread of the coronavirus. And, just like drivers in general violate that one-car-length rule, so individuals frequently fail to maintain proper social distance now.

This leads those most likely to be affected by poor social distance to push for ways to enforce it. This week’s lead stories offer two examples.

Another group at high risk for contracting COVID-19 has been identified: Transit industry workers. The essential personnel responsible for carrying other essential personnel to their jobs are coming down with the disease at an alarming rate. According to a CityLab article, as of April 13, 50 MTA New York City Transit workers have died of the disease, a mortality rate higher than that of the city’s police and firefighters combined.

And the crisis is spreading to other cities. As of today (April 15), the Amalgamated Transit Union lists 21 of its members in cities from Boston to Washington (state and District of Columbia) as having succumbed to the virus, an increase of five in the two days since the CityLab article appeared. The Transport Workers Union of America, according to the article, had reported seven of its members had died as of April 13; three of those worked for the Southeastern Pennsylvania Transportation Authority, where Local 234 is the second-largest TWU local after New York’s Local 100.

The high mortality rates arise directly from the close contact most transit vehicle operators have with riders. The Bureau of Labor Statistics states that bus drivers have one of the highest rates of injuries and illnesses of any occupation, and a New York Times analysis found that they rank in the 78th percentile for being in close physical proximity to others. Compounding the problem is the age of the workforce: 13 percent of transit workers are over 65, compared with seven percent of the workforce as a whole.

In response to the rising death toll, the ATU and the TWU — the nation’s largest and second-largest unions representing transit workers, more than 300,000 in all — issued a joint call for action April 3 to protect transit workers from harm. The unions’ demands largely follow the “Safe Service” policies the ATU called on transit agencies to implement. Those include:

Several agencies have implemented at least some of these policies in response. In Philadelphia, the requirement that riders wear masks was reversed after video circulated of police forcibly ejecting a rider from a SEPTA bus for not wearing a mask. Workers and their representatives say that agencies’ slow response to their concerns necessitated the call for action.

Very few city sidewalks are wide enough to allow two people either walking abreast or passing each other to maintain a six-foot separation. Greater Greater Washington reports that in the nation’s capital, a “tactical urbanist” group has taken guerilla action to provide walkers with that space now that cars aren’t using it.

A group calling itself the ”DC Department of Transformation” has installed “Pandemic Protected Sidewalks” on sections of two streets in the Dupont Circle neighborhood by marking off part of the road pavement with traffic cones. Other District residents have installed similar demarcation lines along at least nine city streets, posting the pictures or announcements to Twitter using the hashtag #WidenDCSidewalks.

“Advocates are inviting neighbors to ‘continue to take actions ourselves until the city does their job of protecting citizens by widening sidewalks and reducing the speed limit across the city,’” the article notes. The urban guerillas are also calling on the city to reduce its speed limit to 20 mph to accommodate the increased number of pedestrians walking to open shops and work who need to maintain social distance.

Amidst all this talk of keeping one’s distance, it’s worth remembering that good transit does more than move people from point A to point B. Transit, especially rail transit, promotes more efficient use of land by enabling the development of places where people can live, work, shop and play without needing to use a car.

The Urban Land Institute’s annual Hines Student Competition seeks to spark interest in designing better urban environments in an interdisciplinary fashion among collegiate students of planning, design and real estate development. Each year, competitors are given a particular design and planning project to tackle, and an international jury reviews the proposals at the chosen site.

This year, the site visit was replaced by a virtual presentation to the 12-member jury. The jury was charged with evaluating plans for a mixed-use development centered on a commuter train station to be built along the Florida East Coast Railway line in midtown Miami, straddling the Wynwood and Edgewater neighborhoods.

The competition received 113 entries from students representing 42 sponsoring universities and 56 campuses. The winner of this year’s Hines Competition was a team of five graduate students from Columbia University and the Pratt Institute in New York. Their proposal, “La Mezcla,” envisions an environmentally sustainable community that can withstand coming climate change. The socioeconomically mixed communities would benefit from the new commercial center and its accompanying jobs while the development itself would work to erase the perceived barrier the Florida East Coast rail line erects through the middle of the district.

Richard M. Gollis, who headed the Hines jury, said of the project, “This was one of the most complicated study areas that Hines competitors have ever had to work with. It required a solution that covered millions of square feet of potential development, realities of south Florida resiliency, social equity for stakeholder communities, and significant regional transit connectivity. However, each of the finalists rose to the challenge and delivered compelling visions of the site’s redesign. La Mezcla stood out because it embraced the spirit of the Wynwood/Edgewater neighborhood. They created a plan with a strong urban design vision, sound technical strategies and a compelling financial plan,” Gollis, founder of the California-based Newport Group development firm, also serves as a ULI trustee and a governor of the ULI Foundation.

The winning team received a $50,000 prize, while the three other finalists received $10,000 each. The competition is funded by an endowment from Gerald D. Hines, founder of the Hines real estate investment and development firm.