To Truly Be Just, ‘Design Challenges’ Need to Listen to the Communities they Claim to Serve – Next City

To Truly Be Just, ‘Design Challenges’ Need to Listen to the Communities they Claim to Serve 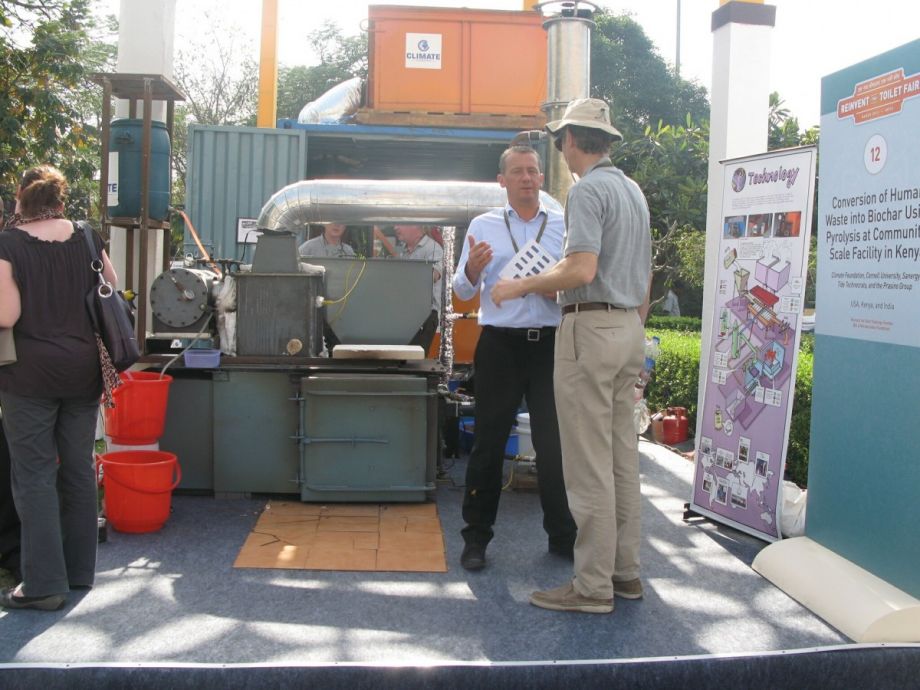 Among the inventions on display at Delhi's Reinvent the Toilet Fair in March 2014 was a machine that converts human waste into biochar via pyrolysis. (Photo by SuSanA Secretariat/CC BY 2.0)

Editor’s note: The following is excerpted from Design Justice: Community-Led Practices to Build the World We Need by Sasha Costanza-Chock. In this excerpt, Costanza-Chock takes us through a typical “design challenge” — a “frequent, highly visible and narrative-centric” approach to design. As Costanza-Chock shows, these challenges often bring visibility to issues affecting vulnerable communities but do not consult those communities, leading to solutions that don’t work locally.

Design challenges are a frequent, highly visible, and narrative-centric approach to design. In 2011, the Gates Foundation launched a design challenge to develop a new kind of toilet. The rationale was as follows: “The Water, Sanitation & Hygiene program initiated the Reinvent the Toilet Challenge to bring sustainable sanitation solutions to the 2.5 billion people worldwide who don’t have access to safe, affordable sanitation. Grants have been awarded to sixteen researchers around the world who are using innovative approaches—based on fundamental engineering processes—for the safe and sustainable management of human waste.”

The goal of the challenge was to create a toilet that “removes germs from human waste and recovers valuable resources such as energy, clean water, and nutrients; Operates ‘off the grid’ without connections to water, sewer, or electrical lines; Costs less than US$.05 cents per user per day; Promotes sustainable and financially profitable sanitation services and businesses that operate in poor, urban settings; [and] Is a truly aspirational next-generation product that everyone will want to use—in developed as well as developing nations.”

Between 2011 and 2018, the Gates Foundation invested more than $200 million USD in the Reinvent the Toilet Challenge and related toilet R&D. Projects each received up to $100,000. Prototypes used high heat to convert feces into biochar, boiled black water to extract pure water, and added chemical agents to break down waste, among other technologies. In 2013, the foundation announced $5 million for Chinese researchers; in 2014, announced another $2 million for Indian researchers; and in 2018, held a Reinvented Toilet Expo in Beijing, where it announced a commitment of up to $200 million more, as well as $2.5 billion (billion, with a b, not a typo) in financing from the World Bank, Asian Development Bank, and African Development Bank. The challenge framing implied that the key problem is the failure of developing country cities to provide sewage infrastructure, combined with additional problems such as women’s fear of using public toilet facilities in contexts in which they might be attacked by men.

However, sanitation experts working in developing countries argued that “the communities that desperately need sanitation will be unable to afford the advanced technology the initiative promotes.” For example, unrelated to (and ineligible for) the Gates Foundation’s challenge, Toilets for People, a for-profit business focused on developing affordable toilets for developing countries, designed a low-tech waterless composting toilet with a cost below $200. A Swedish firm called Peepoople designed a biodegradable bag that kills pathogens. Sasha Kramer, cofounder of an NGO that focuses on sanitation in Haiti, put it this way: “Building the toilet is the easy part. The most challenging step is making it work on the ground. The true challenge is not technology, it’s really an issue of access, social mobilization, and ongoing maintenance of the toilet.”

Meanwhile, very low-cost alternatives to sewage infrastructure and large centralized treatment plants already exist and have been effectively integrated into daily life in a wide range of locations for decades (and in some cases millennia).

For example, one of the most common and affordable solutions is a bucket toilet compost system. In essence, human waste is deposited in a bucket, then covered with a few scoops of ash, sawdust, or wood chips. When partly full, the bucket is then emptied into a compost bin. The compost bin must be regularly rotated. Within one year, the waste is converted to useful soil, which is safe to use for agricultural purposes.

My point here is not to argue that new, innovative toilet technology is not desirable, that it is not possible, or even that the Gates Foundation grants to the toilet innovation teams were a waste (pun intended!). Instead, I present the Reinvent the Toilet Challenge for analysis through a design justice lens: What story is told? How is the problem framed? Who decides the scope? What values are built in to the designed objects and processes? Who benefits? Who loses?

To begin, the challenge ignored existing, low-cost, appropriate technology solutions to the “problem.” Although tried and true, and arguably likely to be the most effective, these solutions were not mentioned in the challenge language, were not funded as recipients of challenge grants, and their uptake was not advanced at all by the billions of dollars linked to the Reinvent the Toilet Challenge.

This is not to say that existing systems are perfect, problem-free, or universally applicable. Sawdust requires cutting down trees, ash requires burning things and producing potentially harmful emissions, compost requires physical space for a composting unit, and so on. However, the complete lack of investment in thinking about how to improve already-existing solutions might reasonably be described as a grand failure. This failure is produced by a techno-solutionist orientation (new technology will save us!), an exclusionary and elitist understanding of what technology is and where it comes from (smart scientists in university and corporate laboratories), and a lack of interest in preexisting, community-based design practices.

It is not that new technologies are useless, that design challenges are a waste of time, or that existing solutions are always sufficient. Instead, we must recognize that wherever there are problems, those most affected have nearly always already developed solutions; that existing solutions that come from those most affected are likely to have the advantage of being based on local materials, skills, and infrastructure; that people who are from, and work directly with, the most affected communities should be included in and control design processes that are meant to benefit them; that sometimes (although not always) external resources can best be used to support, improve, scale, and/or reduce the costs of existing, locally created solutions; that barriers are often not about a particular tool or object, but are social, cultural, and economic in nature.

The Gates Challenge assumes the opposite of most of these points, at least in public discourse and in grantmaking: It ignores existing solutions; assumes that solutions will come from university labs far from the social realities of those without access to sanitation; makes no stipulation for, or even suggestion of, a codesign approach that would include local expertise and/or tacit and experiential knowledge; and makes no mention of adoption, usage, or maintenance.

In one of the most insightful articles about the challenge, Lloyd Alter writes that the winning projects are all expensive, complicated, and difficult to maintain. They also require more household space than most intended users possess. Some are potentially deadly: several superheat feces, while others, like the California Institute of Technology (Caltech) winning entry, produce deadly chlorine gas. Alter also writes about the wasted water and energy involved in all flush toilet systems. Most interesting is his discussion of the history of humanure: “The fact is, you don’t need high tech to deal with poop and pee, you need a social organization like they had in China and Japan before the development of artificial fertilizer. There was an entire economic infrastructure … for picking the stuff up, processing and storing it to kill microorganisms, and using it as fertilizer. It was valuable stuff.”

Humanure, historically, was a valuable commodity and an input to sustainable farming practices. Now replaced by imported fertilizers and phosphorous, it has been reframed as waste, and municipalities spend vast sums of money annually to literally throw away a potential source of income. Seen in the light of this history, the Gates Challenge might do better to invest in new businesses that purchase (or collect at no cost) humanure from slum dwellers for processing into fertilizer for sale to farmers, whether in urban farming or after transport to the countryside.

Finally, to highlight another one of the ways that the design narrative invisibilizes the matrix of domination, much writing in this field notes that people in India don’t want to send their daughters to shared toilets because they fear they will be harassed. If sexual harassment is one of the primary barriers to sanitation access, then it should follow that people interested in improving access to sanitation should invest in eradicating sexual harassment. However, this simple insight is entirely absent from the framing, scoping, prize eligibility, publicity, and the rest of the institutional narrative around the Reinvent the Toilet Challenge. It might make sense to perform a cost/benefit analysis of what it would take to eliminate (or drastically reduce) sexual harassment of women and girls during public toilet use versus what it would take to install functioning toilets in each household in India.

The boundaries of any given design narrative, such as in a design challenge, typically constrain the possibilities of addressing systemic issues, root causes, or approaches based on social organization. In the Reinvent the Toilet Challenge, low-cost existing technologies, business models that value humanure as a main input to fertilizer, and the need to eliminate or drastically reduce sexual violence against women and girls who attempt to use shared sanitation facilities are all off the table. This is true even though any one of these three approaches is potentially more likely than a new toilet design to achieve the stated goal of significantly reducing the proportion of the world’s population that lacks access to clean water and sanitation.

Of course, new technologies are exciting and sometimes do bring significant improvements to quality of life and human capabilities, and any given design initiative hopes to maximize impact by tightly focusing on a particular aspect of a broader puzzle. That said, design challenges constructed with little to no input from the most affected people, that assume that solutions will come from university experts thousands of miles away, that ignore existing solutions, and that systematically avoid the root causes of identified problems are not grounded in design justice, and ultimately they are likely to fail in both practical and ethical terms.

Excerpted from Design Justice: Community-Led Practices to Build the Worlds We Need by Sasha Costanza-Chock. Reprinted with permission from The MIT PRESS. Copyright 2020.

Sasha Costanza-Chock (they/them or she/her) is Associate Professor of Civic Media at MIT, a Faculty Associate at the Berkman-Klein Center for Internet & Society at Harvard University, a board member of Allied Media Projects (alliedmedia.org), and the author of numerous articles and two books. Their first book is Out of the Shadows, Into the Streets! Transmedia Organizing and the Immigrant Rights Movement (MIT Press).