To Kill Zombie Subdivisions, Cities and Suburbs Need to Plan Together – Next City

To Kill Zombie Subdivisions, Cities and Suburbs Need to Plan Together 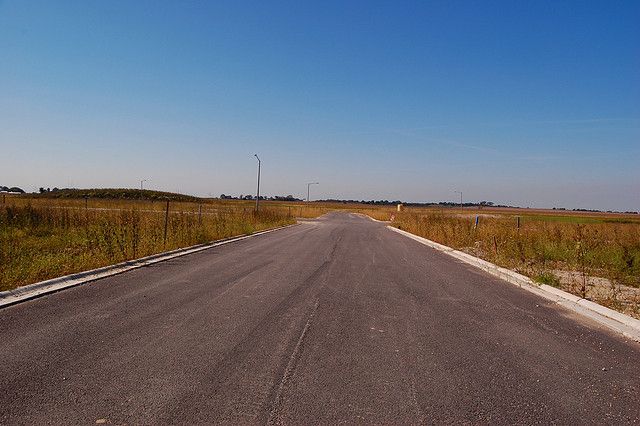 Blight is more than just abandoned train stations and rows of boarded up houses on empty city streets. It’s prevalent in the suburbs too, where developers spread too far, too fast, leaving winding cookie-cutter neighborhoods littered with empty lots. Across various regions in the Intermountain West, between 15 percent and two-thirds of subdivision parcels sit vacant in any given county, according to new research.

A new report from the Lincoln Institute of Land Policy examines how the housing bubble created a white-hot market, luring eager investors subsequently deflated by the Great Recession. Areas from Teton County, Idaho to metro Phoenix are grappling with so-called zombie subdivisions, which are exactly what they sound like: Places carved for quick build-outs and two-car garages that never happened.

It was as much a symptom of deep-pocketed developers looking to pounce on sprawl as it was poor regional planning and not understanding how large the demand actually was.

What does this have to do with cities? Well, sprawl isn’t just a suburban issue. With more power shifting to metropolitan regions, the health of suburbs — especially in large job hubs where families might move out of the urban core for more affordable space — is as important as the financial vitality of the city.

“This is a metropolitan, major region issue,” Jim Holway, the study’s lead author, told me. “It applies to any area that’s growing rapidly enough that you’re creating this overheated market. So Atlanta, clearly, would have this issue.”

Atlanta is an interesting suggestion, given the city’s rapid sprawl and severely lagging transit infrastructure. Last July, the New York Times spoke with a woman who detailed her epic daily commute: “A bus, two trains and another bus.” The lack of easily accessible transit — likely the result of poor planning and somewhat unnecessary sprawl — contributes to stunted economic mobility.

First and foremost, zombie suburbs were the result of overzealous exuberance about demand. “It’s often, ‘Hey, bring it on. Forget standards. We’ve been waiting for this kind of growth!‘” Holway said. But that sort of negligent development could be prevented in the future with some pretty simple policy solutions.

I asked Armando Carbonell, chair of Lincoln Institute of Land Policy’s Department of Planning and Urban Form, how cities and suburbs — especially those with large job hubs linked by transit — can work together as a region to combat aggressive and foolhardy development. Turns out, it’s just a matter of thinking about these things before you start bulldozing land for a few dozen McMansions.

“Better planning for housing demand prior to the zoning and subdivision approval process,” he wrote in an email. “Where housing markets operate at the metropolitan scale, it is important to understand regional housing needs and coordinate planning at that scale. In general, we are recommending that subdivision approval (the regulatory process, sometimes called ‘current’ planning) be better aligned with long range comprehensive plans, which presupposes that those plans exist.”

It’s a chicken-and-egg issue. Approval of new subdivisions and developments should be aligned with regional or metropolitan planning, but the planning doesn’t exist. This is municipal negligence at its finest.