To Deal With Drought, Texas Needs to Manage Growth – Next City

To Deal With Drought, Texas Needs to Manage Growth 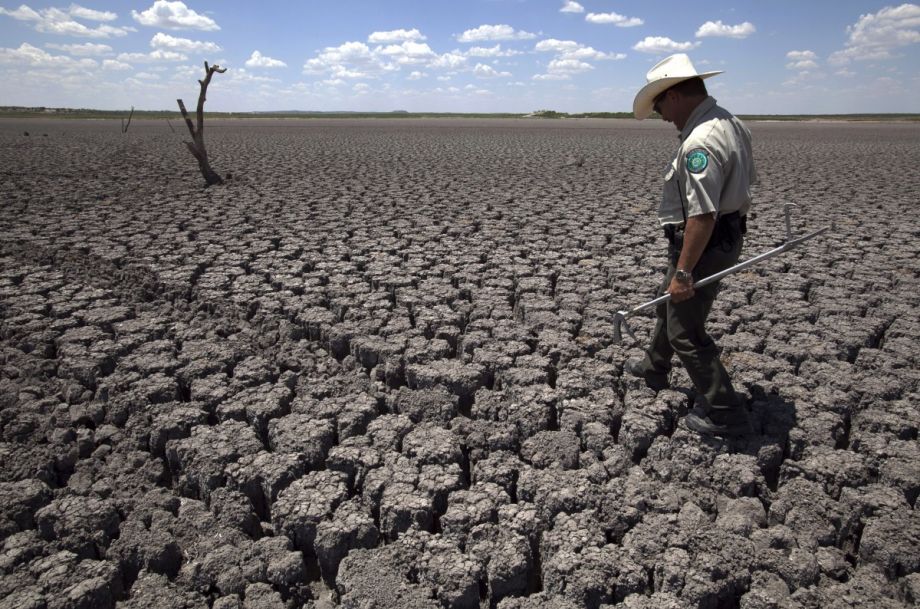 The drought map for the state of Texas from April 8 of this year isn’t pretty. As of the end of March, 67 percent of the state — up from 46 percent four months ago — suffered from moderate or worse drought conditions, according to the Texas Water Development Board. Twenty-five percent of the state is in “extreme” drought or worse, and rainfall has been scant over the last 90 days. 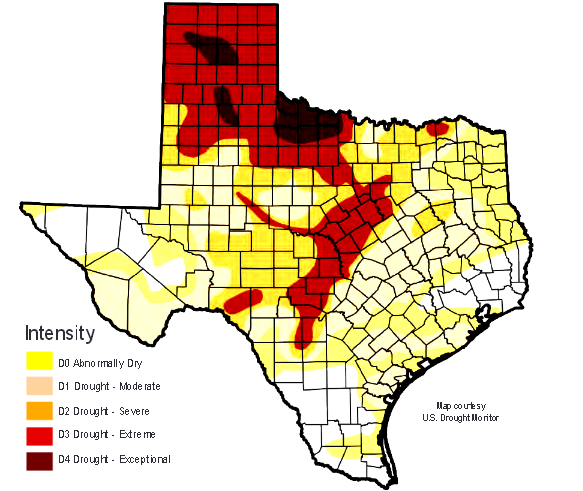 “With the exception of the lower Rio Grande Valley and small parts of Far West Texas, much of the state has received less than 50 percent of normal rainfall,” reads TWDB’s most recent report. “This doesn’t bode well for the next six months. A dry winter generally portends a dry spring and summer.”

Look at a map of the state’s reservoirs, and you’ll see how stressed they are. In the northeastern part of the state, capacity is good, with bright blue indicating levels in the normal-to-high range, above 70 percent. But in the rest of Texas it’s a very different story, with reserves anywhere from abnormally low (60-70 percent) to moderately low (40-60 percent) and all the way down to exceptionally low, indicating reservoirs at less than 10 percent of capacity. 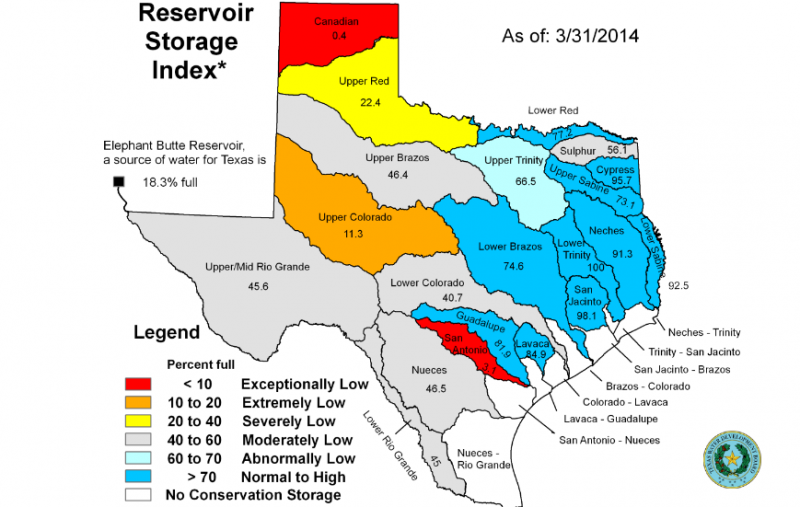 Not only the reservoirs are drying up. Groundwater levels are also on a downward trajectory in many parts of the state, as are stream flows — although reservoirs are particularly vulnerable because of evaporation.

New water is not, for the most part, falling from the sky. In last November’s election, Texas voters approved a referendum authorizing $2 billion in water-related infrastructure spending to deal with the drought. But Alyssa Burgin, director of the Texas Drought Project, says that many of the projects in that plan fail to address underlying problems in the way the state manages water.

“One of the first projects coming off the boards is a new reservoir for water-wasting Dallas,” Burgin writes in an email. “Dallas has a suburb that uses 396 gallons per capita per person. Other parts of the Metroplex are almost as wasteful. In severe droughts, like, say 2009, they were unable to get their water usage for lawns down under 70 percent. So now they’re going to have at least one and likely more new reservoirs, or giant evaporation ponds. Katherine Hayhoe of Texas Tech University (director of ATMOS climate research) tells us that a big part of the problem with climate change is additional evaporation due to higher temperatures. So how much sense does it make to build more reservoirs? None.”

Lavon Lake, located not far outside Dallas, is one of Texas’ shrinking bodies of water. According to a report from the local ABC affiliate, it’s less than half full. One local marina owner has built bridges from the parking lot to the water and says that if things don’t change soon, he might have to extend them another half-mile to reach a navigable depth.

Meanwhile the mayor of Frisco, one of several surrounding cities that draw their drinking water from the lake, is worried about the needs of his fast-growing community. Frisco has been under Stage 3 restrictions, which limit outdoor watering to once a week and prohibit it during daytime hours. The mayor cautions that the city may have to go to Stage 4 water restrictions, “a reduction of whatever amount is necessary. If circumstances warrant.”

Texas state climatologist John Nielsen-Gammon has called the persistent drought the second worst in Texas history, after the devastating dry spell that lasted between 1950 and 1957. But the state’s population then was only a fraction of what it is today. In an interview with the Houston Chronicle, Nielsen-Gammon said that conditions could be ripe for the kind of blowing dust and soil loss that plagued the Southwest in the 1930s Dust Bowl era. “If we don’t see summer months of more than average rainfall,” he said, “we will likely see conflicts between agricultural and municipal/industrial uses.”

In 1960, just more than 9.5 million people lived in the state. Now it is home to more than 26 million, and contains several of the fastest growing municipalities in the country. Take Austin: An estimated 110 people move there every day. Between 2010 and 2012, five of the nation’s top 10 fastest growing cities are in Texas.

That pace of growth, upon which the state’s economic projections depend, means that the conflict between rural and urban water interests is bound to intensify if the drought continues. Nielsen-Gammon has predicted that it will, “probably” between the next five and 15 years. Some cities, such as San Antonio, are dealing aggressively with the problem through conservation, recycling and stockpiling. Others are still hoping that new sources of water will solve the problem.

In the West Texas city of Odessa, the Permian Basin oil boom has been driving population growth in one of the driest parts of the state. Population in this small city grew by 3.4 percent between 2011 and 2012 and now stands at about 106,000. Although water restrictions resulted in the city cutting its consumption from 7.06 billion gallons in 2011 to 5.6 billion in 2013, the drought means the water supply is hurting. According to the _Odessa American, the three reservoirs supplying Odessa range from 12.34 percent full to a mere 1.5 percent.

But in Odessa, watering restrictions are more liberal than in Frisco — you can water outdoors twice a week, at any time of day, with any type of watering system. According to the Odessa American piece, if the district runs out of surface water, which it could by the end of the year, it plans to tap into groundwater in nearby Ward County.

“Worst case scenario involves no (rain) inflow and high water usage… then by November, we will have used all of the surface water that we have available,” [John Grant, general manager of CRMWD,] said. “As we go into the winter, we’ve got the water in Ward County which can carry us through four, five months and into 2015.”

The Ward County well fields, which involves two separate pipelines that brings in a mixture of both surface and groundwater, could potentially bring in 45 million gallons a day. Should that happen, Grant previously said at Tuesday’s Odessa City Council meeting that Odessa could see about 20 million gallons.

The headline to that story, “Drought Continues to Plague Basin,” accompanies the seemingly contradictory subhead, “Low lake levels do not scare officials.” This juxtaposition encapsulates the kind of wishful thinking Burgin cautions against — the idea that more water can always be found somewhere so that growth can continue.

“It’s hard to summarize the hold that developers have on the state, along with the oil and gas industry,” Burgin writes. “Both demand an absolute fealty to the idea that we have an indefinite supply of water and that we can accommodate growth. Odessa, for example, seems to ignore the fact that their water is coming from somewhere — somewhere where the water is going to be needed, as well. Many cities are looking to take water from other cities, and yet we keep growing, oil and gas keep drilling, and people keep watering their lawns.”