Through Documentary, Bostonians Share Their Immigrant Experience – Next City 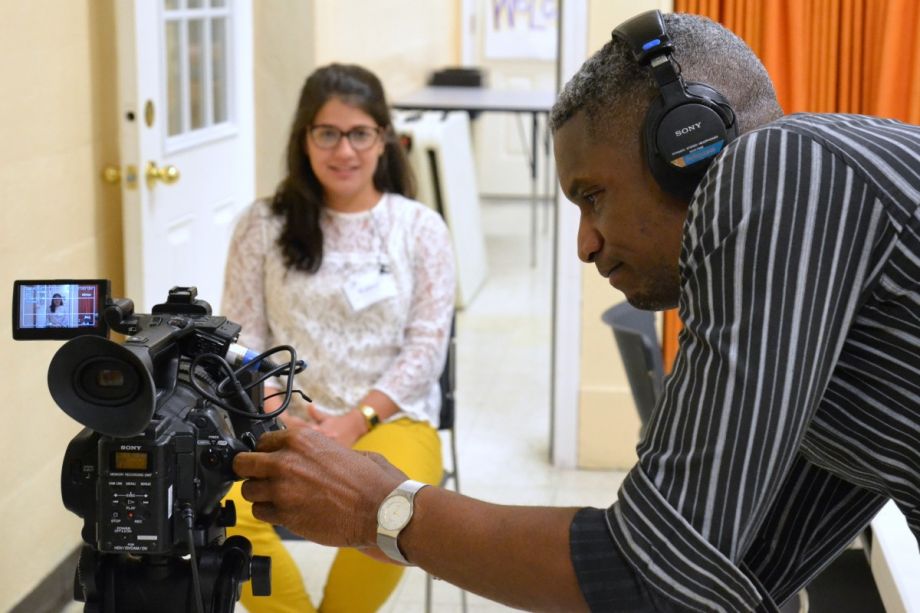 In a basement meeting room of the Cary Memorial Library in Lexington, Massachusetts, filmmaker Qin Li introduced her documentary the small crowd gathered on folding chairs. But to explain her film, she also had to explain her immigration to America.

In China, she told the crowd, she worked in academia studying women in politics. She came to the U.S. with her husband and two young sons in 2016 to support his family. They settled in Revere, a city five miles outside Boston with a growing immigrant population. It was there she connected with Dimple Rana, an Indian immigrant’s daughter and first woman of color to run for office in the city.

Li’s 10-minute documentary, “Campaign for a New America,” chronicles Rana’s campaign for City Councillor-At Large, all the while showing how the Rana family’s immigration plays into her political ambitions. (Though she ultimately didn’t win her campaign, Rana is running again.) Li captures Rana out canvassing, explaining at one doorway that while the city’s immigrant population is increasing, “you could never tell from our elected officials.”

Li made her film through New Immigrant and Refugee Visions, a program that trained immigrants from 10 different countries to capture the immigrant and refugee experience in the metropolitan Boston area through documentary film. The result of training, which lasted between 2017 and 2018, are 10 diverse stories that capture everything from a Haitian immigrant who teaches a popular Saturday dance class in Cambridge to a young Rohingya man, persecuted as a Muslim in Myanmar, who was granted asylum to the United States and is living apart from his family in Boston.

New Immigrant and Refugee Visions is an initiative of Community Supported Film, a documentary training model inspired by community supported agriculture. CSFilm founder Michael Sheridan is a filmmaker who became increasingly disillusioned with how media portrayed conflicts around the world. He traveled to Afghanistan and Haiti, because he believed those places were often featured as settings in media consumed by Americans and made by outsiders. There, he trained community organizers to use film to document their own people’s stories.

For several years Sheridan wanted to start a program in the metropolitan Boston region, where he is from. Cities just outside Boston, including Chelsea, Malden and Revere, boast the highest immigrant populations in Massachusetts.

In the lead up to the 2016 presidential election, as negative rhetoric around immigration increased, Sheridan felt a familiar media disillusionment — this time, it was how media portrayed members of its own country. He felt CSFilm could contribute more nuanced media around the new immigrant and refugee experience, encouraging conversation to overcome political divide.

All Boston-area trainees were leaders within their community before being recruited for NIRV. For many, the training was an opportunity to work with immigrants they might not otherwise connect with. “Most of us really have our own community,” says Rafael DeLeon, a NIRV filmmaker who co-founded the Latino Support Network and produces the “Camino hacia la Integracion” (Pathways to Integration) local television program. “I live in Lynn, with a lot of Dominicans … but to all be in the same room with the same goals, that was an experience by itself.”

Both DeLeon and Li say the strength of the program was in that diversity; many filmmakers also profiled subjects from different immigrant communities than their own. While they learned how different tight-knit communities had settled around Boston, it was ultimately an opportunity to create a narrative on similar struggles faced by newcomers, regardless of country.

And by utilizing the documentary format, filmmakers could present that human experience without outside commentary. “You have that unique opportunity to let [the viewer] experience, instead of being told,” DeLeon says. “You don’t find that in any other media.”

As an existing leader in the Dominican community, DeLeon worked to build trust with a young woman with uncertain Deferred Action for Childhood Arrivals (DACA) status and her mother, who left the Dominican Republic to escape an abusive husband. The resulting film, She’s an American Child, explores their close relationship, joint desire to remain in the country and anxiety around deportation.

Filmmakers were encouraged to create media that would prompt conversation with viewers, a sort of tool to bridge audience divides. At the Cary Memorial Library, where three of the films screened last Thursday, May 8th, filmmakers asked the audience a few questions to consider while viewing. (“How do you define the place you call home?” asked DeLeon, before screening his DACA film.)

Beyond learning film and storytelling techniques, there’s a lingering impact for filmmakers during these audience talkbacks. Li says it’s empowering to set the tone for an immigration-focused conversation. “Not just me, but all the trainees, face all kinds of challenges,” she says. “We need to raise our voice, have a conversation with the public and learn from each other.”

It can be revealing to filmmakers that most audience members have their own stories of immigration — at the library, the majority-white crowd spoke of where their own families came from and growing up in neighborhoods with robust immigrant communities.

“To my surprise, almost everyone is connected in some way to immigrants,” DeLeon says.

The post-screening discussion is in fact a crucial component of CSFilm. “We want a discussion of how the films impact people’s understanding of the issues, and how they want policy and other community engagement to work,” Sheridan says.

Nearly 400 people attended the premiere of five films at the Boston Public Library in April. This week, films are screening at a Welcoming America forum in Pittsburgh. CSFilm is also working to bring the films to more conservative regions of the country, with screenings in churches and community halls. CSFilm is now fundraising to support that effort.

To Sheridan, the films aren’t so much political as they are expressions of how we relate on a human level. “There’s a pattern in all the films,” DeLeon told the crowd at the Cary Memorial Library. “They’re about family and community, about families wanting to do good.”