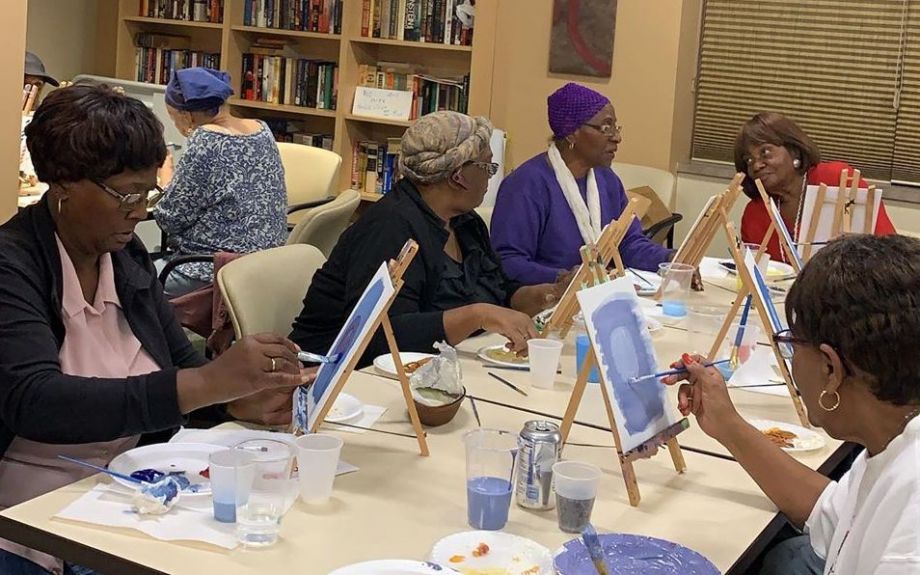 Paint & Sip activities are one of many offered free-of-charge to residents in Region Nine Housing communities.

Access to safe and well-maintained affordable housing can be transformative for low-to-moderate-income seniors, persons with disabilities and families. Region Nine Housing Corporation was established in 1970 to meet these needs. Core values of the nonprofit developer and property manager include ending homelessness, increasing affordable homes and aging in place. Residents interviewed here are among many whose lives improved significantly with access to quality affordable housing.

The issue of homelessness and the need for affordable housing are closely linked, and these circumstances are often compounded for those living with disabilities. This was the case for Marietta Andrews, current resident of Region Nine’s Plaza Apartments in Jersey City. After having major surgery several years ago, Marietta, who worked as a nurse’s aide for 26 years, faced housing insecurity and had a difficult time adjusting to the demands of living with a disability. Within a year, she found herself homeless and without a net.

“I had really fallen behind,” explains Marietta, “and at this age — to go through what I went through — it was just overwhelming.”

While staying at a shelter in downtown Jersey City, Marietta applied for affordable housing assistance. Since Region Nine implements HUD’s Homeless Preference — which permits homeless individuals to accelerate to the top of their waiting lists — Marietta was able to move to Plaza Apartments in February 2019. “This is a new beginning for me,” she says.

In 2018, nearly 11 million households spent more than 50% of their income on rent. According to Harvard’s Joint Center for Housing Studies, “high housing costs force millions of low-income older adults to sacrifice spending on other necessities including food, undermining their health and well-being.” James Goodwin, 69, was one of them. For James, Region Nine’s commitment to expanding affordable housing has changed his quality of life. “In comparison to where I was living before,” James explains, “I can save some money now … do a couple extra things for myself,” he said. “In my old place, I couldn’t even afford to put my van on the road, so I didn’t really have transportation.”

As an avid pool shark, James now spends a lot of time in his building’s community room, showing off his skills and teaching other residents to play. “We’re a big community here,” he says of the Edward and Lois Gray Apartments in Irvington, New Jersey. “We all look out for each other.”

For seniors, the ability to age in place is paramount. Along with housing security, successful aging in place requires maintaining social connections and the ability to participate and thrive in one’s community. Jimmy Williams had been living in a nearby nursing home for three years before moving into Region Nine’s Edward and Lois Gray Apartments. As a senior with special mobility needs — it was critical that his new residence was wheelchair accessible, and that the property was ADA compliant.

Region Nine promotes independent living and the connection to high-quality, community-based services that reflect the unique needs and preferences of each resident. For Jimmy, this means attending a weekly resident-led prayer group with his neighbors and being able to cook his favorite meals in his kitchen. Jimmy does all the cooking and cleaning in his apartment, and he “plans to do it for a long time,” he says. “I’m not going anywhere. This is home.”