Three Lessons On Placemaking – Next City 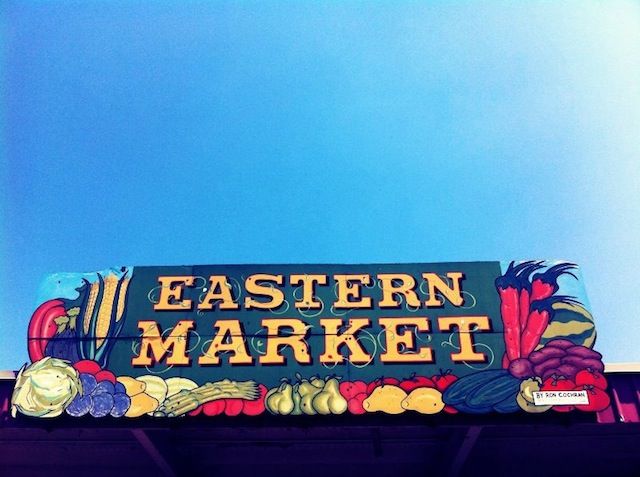 Detroit’s Eastern Market, where a broad customer base is an integral part of its success. Credit: Bill Bradley

Spend enough time around urbanists and you’re bound to end up talking about placemaking, which at its core is about improving public space and neighborhoods. Whether it’s repurposing a depopulated city’s old town square or turning an abandoned factory into a park, creating a sense of community through space is the main goal.

There’s a constant stream of dialogue about how cities can better approach placemaking. Today, MIT released a white paper detailing how the practice can unify communities. The report, which examines placemaking across the country from New York’s Bryant Park to Detroit’s Campus Martius, is quite extensive. I’ve picked three examples — highlighted by three different cities — I found most useful.

There’s not a lot of cash to go around these days, and cities still face daunting issues from transit safety to streetlights. That means there typically isn’t much money left over for a new park. But public-private partnerships can create new avenues for much-needed funding. Houston’s Discovery Green Park, for instance, probably would not be sustainable without one.

Per the report: “The park’s operations funding comes in roughly equal parts ($650k – $750k each) from four sources: the City; rents from a cafe and restaurant; a bi-annual gala; and sponsorships and rent from private events.”

2) Create a Broad Customer Base

Placemaking is not like opening a restaurant or retail. You don’t cater to a specific crowd, and you can’t paint yourself into a corner — that defies the idea of community and public space. The paper highlights the revitalization of Detroit’s historic Eastern Market as a positive example:

There are now over 40 vendors that offer processed food items like pickles, jam, and granola, but EMC [Eastern Market Corporation] deliberately curates the ratio of fruits and vegetable vendors to other types, maintaining approximately 200 traditional produce vendors to 50 specialty (“hipster,” or typically more upscale) foods to retain the essential mission for the market and to keep the customer base broad.

I’ve spent many Saturdays at Eastern Market, and it is arguably the single most economically and racially diverse place in Detroit. That is, as the report details, a huge part of the Market’s vitality.

Two Sundays each summer, a three-mile stretch of road from downtown Fargo, N.D. across the river into Moorhead, Minn. is closed to traffic for Fargo/Moorhead StreetsAlive. It’s part of a growing number of Open Streets initiatives across the country to encourage biking, walking and healthier lifestyles. This is placemaking at its most rudimentary: A party in the streets.

Now, the obvious goal here is to shift behaviors in a car-centric culture. Getting more people out from behind the wheel and on their feet is a good thing, even if only for two days a summer. But by getting people to rethink their behaviors, it can change development and the fabric of the city for future generations. Fargo City Commissioner found that StreetsAlive’s car-free day “helps participants experience firsthand a better quality of life, and help promote sustainable development in a fun, non-pedantic way.”

The report is full of plenty of heady stuff, like the virtuous cycle of a place’s relationship to the community. But I’m more interested in the hard facts. If you want placemaking to be remotely successful — whether it’s a festival or brick-and-mortar — cities have to seek non-traditional funding. New places have to embrace the entire community, which means finding ways to make it economically diverse. And city officials need to leverage the good feeling these festivals give their residents into concrete goals and development.