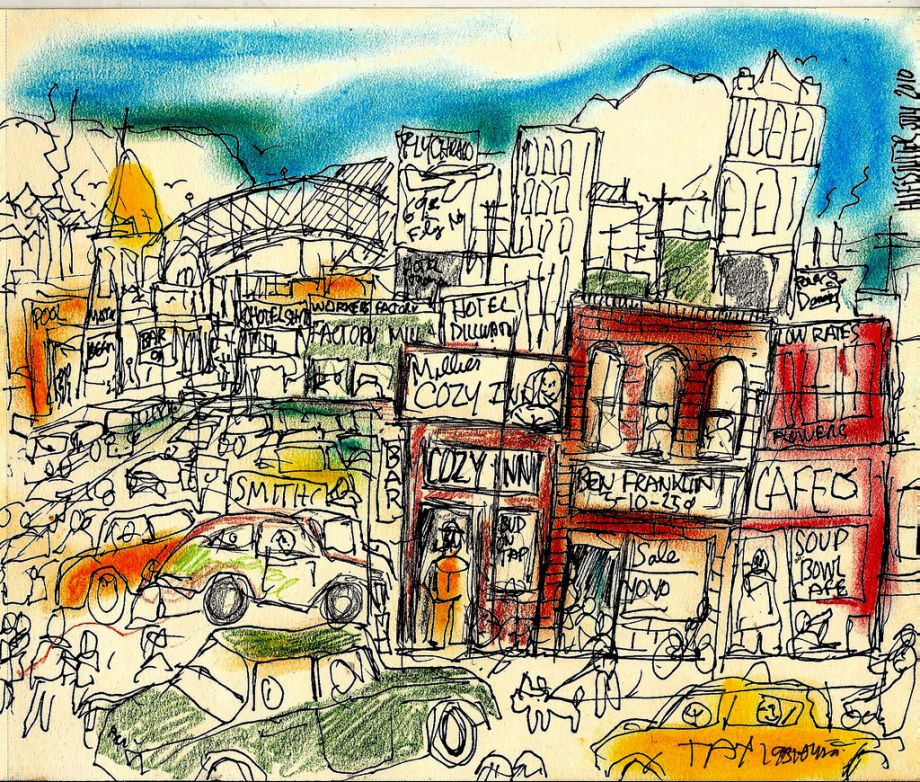 Imagine KC, a 12-part series produced by Kansas City Public Television, asks the viewer to “imagine a vibrant, connected, and green Kansas City region.” The question on its own is not explicit. But for many, it is easily envisioned: Tree-lined streets, transit access, public art, cafes abuzz. The details may be vague, but the outlines are clear and color-coded.

The question uses buzzwords — “green,” “vibrant” — that are the stock-in-trade of city boosters. They have, like the best corporate catchphrases, the uncanny ability of shrinking down vast subjects to a transferable currency, fitted to the narrow slots of headlines, tweets and names of government initiatives. And yet, unlike corporate catchphrases, they are not patented or strictly defined. They can be reapplied or misapplied endlessly.

Author Thomas Frank, in an article for the current issue of The Baffler, an incisive politics and culture magazine, criticizes the shallowness of buzzwords by zeroing in on the term “vibrant.” In his view, vibrancy has become an almost universal measure of success for cities without having a clear definition. “Vibrancy is so universally desirable, so totemic in its powers, that even though we aren’t sure what the word means, we know the quality it designates must be cultivated,” writes Frank.

He criticizes his old home town, Kansas City, for aggressively catering to this notion of vibrancy in a way that detracts from serious urban improvements and even from real cultural value. By his account, “vibrant is a quality you find in cities or neighborhoods where there is an arts or music ‘scene,’ lots of restaurants and food markets of a certain highbrow type, trophy architecture to memorialize the scene’s otherwise transient life…”

Frank is right in the sense that there is a newfound emphasis on the cultural viability of cities, especially in cities that were formerly notorious for their drollness (such as, ahem, Kansas City). It is also easy to understand his frustration: Because of overuse, words like “green” and “vibrant” have lost some of their novelty and power, and enough civic leaders and CEOs have espoused them to make anyone a little queasy.

But Frank neglects to calculate how much, really, public art and music festivals take attention and resources away from serious issues. In fact, most of the initiatives highlighted by Imagine KC (which had the audacity to ask us to “imagine vibrancy”) involve practical improvements to transit, recycling and energy conservation. Beneath the cliché, one finds a little substance.

As ideas spread, they inevitably hit snags. But ubiquity can have an upside. It means that leaders are listening and that the ideas have achieved greater mileage. Recognizing vibrancy, and even trying to measure it, means that policymakers are at least acknowledging some of the abstract qualities that make communities appealing, be it park space, murals or coffee shops. Even if a city’s movers and shakers have only a shallow understanding of the concept, it can lead to meaningful changes on the ground.

If this means that policymakers focus more on public art than, say, public housing, we have a problem. But striving for vibrancy, however defined, is not necessarily indulgent or futile, but an exercise in expanding what we understand as the needs of our cities.