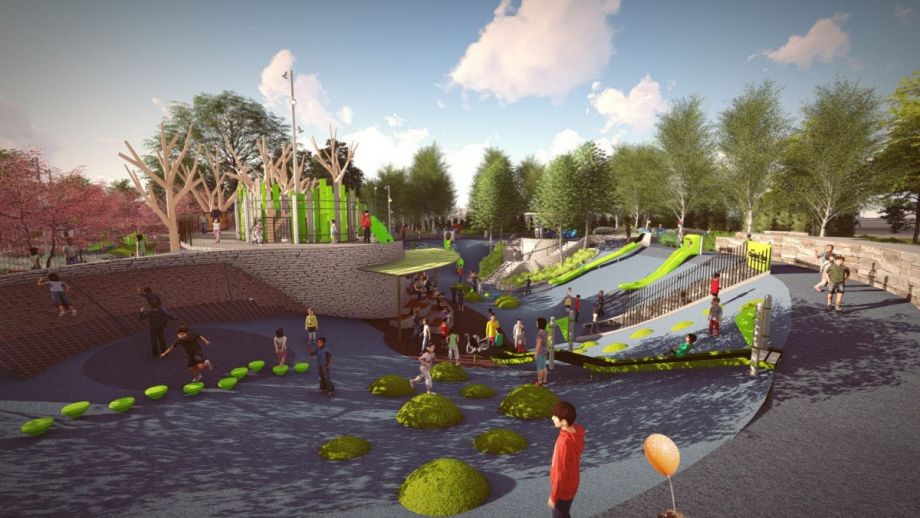 A rendering of the all-abilities play space at Trane Park. (Credit: All Abilities Trane Park Project)

If two or three siblings want to go play in the park with friends, but one of the siblings uses a wheelchair, does that sibling end up staying home?

That scenario was on the mind of Steve Carlyon, Parks and Recreation Director for La Crosse, Wisconsin, when he spoke to WEAU Channel-13 News for a story aired Wednesday announcing that the city had just broken ground on a new 2.6-acre, $6-million all-abilities park. WEAU reported that the park would be first of its kind in the region, and city officials told the station that there are only 17 other all-abilities parks in the world.

One of newest is Atlanta’s Sara J. González Memorial Park, rebuilt to be compliant with the Americans with Disabilities Act (ADA) and renamed for a longtime Latinx community leader of the surrounding neighborhood, as Next City reported previously.

The re-vamped Trane Park, in La Crosse, will include spaces for schools to teach students, and for hospitals to work with patients, WEAU reported.

“The hospitals, this will be an extension of their programs for parents and children that they work with. They’ll be able to come to a place where the types of equipment that are necessary to develop better motor skills, or to socialize, or to integrate with other kids,” said Carlyon, according to WEAU.

The station reports that the project so far has raised only $3 million of the $6 million needed to convert the park’s former tennis courts and baseball field and buy new equipment. About half that comes from city and county dollars, another $1 million comes from corporate gifts or in-kind donations, $425,000 from anonymous donations, and $11,835 from individual donations, according to the park’s website. City council is expected to allocate another $1 million to the project in the coming weeks, according to the station.

The park’s website also notes that an estimated 12,190 people over the age of five have a disability in La Crosse County — more than 12 percent of the population.

It’s been a seven-year effort up to this point, with the park expected to open in the fall of 2019.