This Startup Has Figured Out What Dockless Scooters Need: Docks – Next City

This Startup Has Figured Out What Dockless Scooters Need: Docks 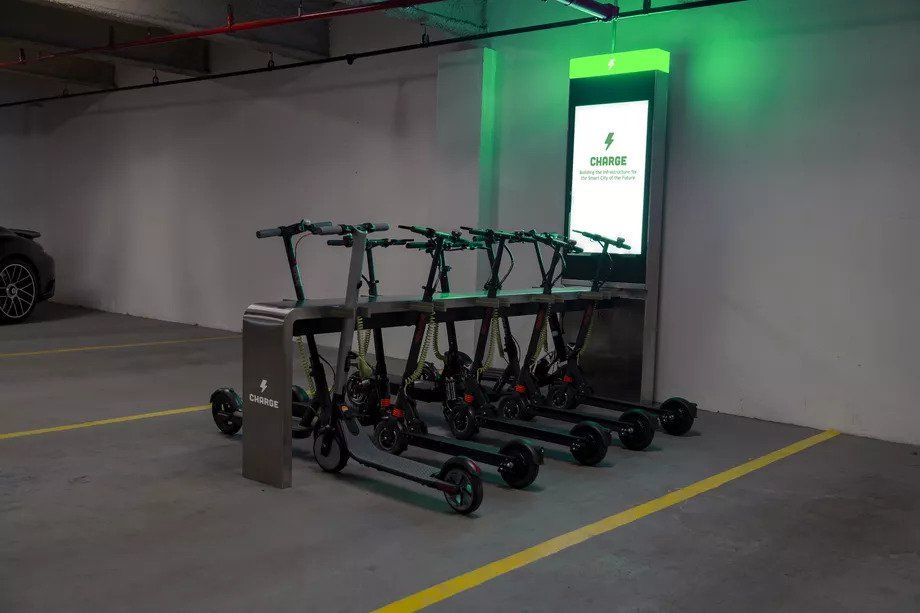 New start-up GetCharged has found a way into the dockless scooter industry. Its big idea? Docks.

After first surfacing in April, GetCharged — which also goes by simply Charge — is now looking to Atlanta to be the home of its first charging station docks.

Last Thursday, the company announced its partnerships with owners of parking garages and other private property in Atlanta. The company plans to install charging stations that can charge up to 10 scooters at once, reports Curbed Atlanta. The business will charge users, though exact rates or mechanisms have not been advertised.

“We believe what is happening on the ground in Atlanta creates a perfect storm for Charge to provide the infrastructure to help eliminate the significant challenges associated with the dockless model, that is, e-vehicles piling up when not in use,” Charge co-founder and CEO Andrew Fox said in a press release.

Last May, e-scooter company Bird brought scooters to Atlanta. In January 2019, after scooters were left on sidewalks and streets, the City of Atlanta passed new regulations governing how scooters can be used and parked.

The laws prohibit scooter users from riding on sidewalks, pushing them to use streets and designated bike lanes instead. Atlanta requires scooters to be parked “neatly;” preventing scooters from being parked on narrow sidewalks, crosswalks and landscaping. The Atlanta Police Department and the Department of Public Works both work to enforce riding behavior and parking laws.

Atlanta is not the only city struggling to regulate their commuters’ dockless transportation. For pedestrians, scattered scooters and dangerous riders are a nightmare. Earlier this year a disabilities rights group sued the City of San Diego, along with three scooter companies, for allowing unregulated scooters to clutter sidewalks, violating the Americans with Disabilities Act.

And according to FOX5, Alpharetta, a city just outside of Atlanta, passed an ordinance to ban dockless scooters altogether.

Charge may provide a middle-ground alternative. The company says it will work to prioritize pedestrian safety and preserve city street aesthetics.

“The city of Atlanta recognizes the issues with dockless systems and is starting to crack down on e-scooter companies, having recently issued more than $100K in fines and impound fees, and it is time for the community to have a workable solution that solves these issues and empowers the micromobility industry,” Fox said in a statement. According to 11Alive, city officials did confirm that 2,171 scooters had been fined and impounded as of April 1.

Fox is a self-described serial entrepreneur who previously founded a number of entertainment and nightlife-related startups. Charge appears to be his first foray into micromobility.

Andrea Boone, Atlanta city council member and vice-chair of Atlanta’s Public Safety Committee, cautiously endorsed Charge in its press release. “As the city of Atlanta continues to grow, so has the need for alternative, eco-friendly modes of transportation like e-scooters and e-bikes, but these innovative transportation solutions, while fantastic for so many reasons, have cluttered our city streets and sidewalks. We would welcome a solution that addresses the safety and aesthetic issues caused by these devices,” Boone said in a statement.

Charge hopes to have 25 operating stations in Atlanta in the upcoming months.

Though Charge has listed 250 potential charging stations across Atlanta, none — including the initial 25 — are yet confirmed.