This Portland Marketplace Is Just for Indigenous Vendors – Next City

This Portland Marketplace Is Just for Indigenous Vendors 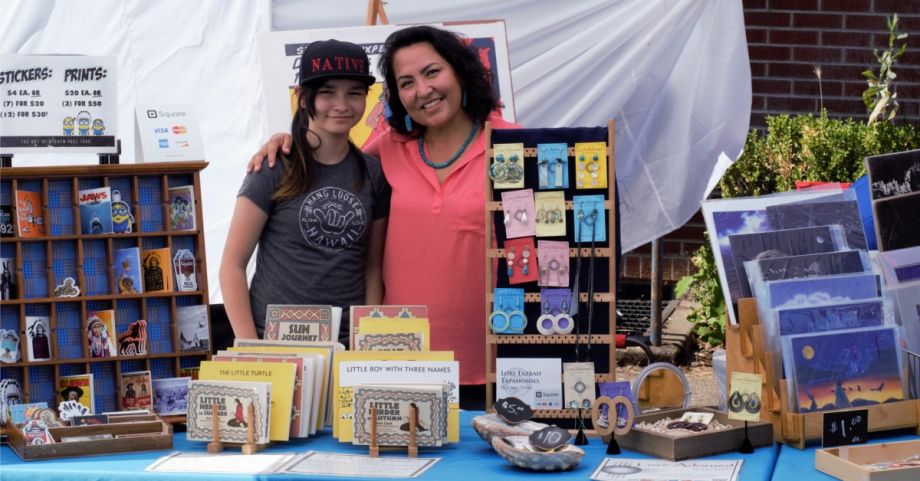 Lluvia Merello and Chance Starr launched their craft booth Indigenous Come Up in 2017, by selling at native events and pow-wows across the Portland area. To expand the business, the pair decided they would sell at any marketplace they were accepted into.

“In that experience, it was really difficult to be the only business of color or the only Indigenous business at events,” says Merello, who is indigenous to Peru with Andean and Inca heritage. “Those experiences were sometimes hurtful and most of the time disappointing.”

It planted a seed in Merello’s mind: What if there were more marketplaces specifically for Indigenous vendors, ones that were not only accessible to join but offered a culturally sensitive, collaborative environment to grow their business? She had no budget or location secured. But determination led to the founding of the Portland Indigenous Marketplace in 2018, which recently became a nonprofit and has successfully transitioned to virtual marketplace events.

“We started this with absolutely zero budget and continued doing that for almost nine months,” Merello says. “We continued by just showing up, with just community. We did it with just us, parking lots, everyone bringing what they could and supporting each other.”

The first Portland Indigenous Marketplace took place on Black Friday in 2018, after Merello secured free use of a parking lot from the Rockwood Community Center. Merello did not charge a booth fee to vendors selling a mix of arts, crafts, jewelry wellness products and fashion. Instead, she secured Ingenious musicians and dancers to provide entertainment and spread word of the event through social media. It attracted an estimated 2,000 people.

“I was happy just because of the name [of the marketplace] and the way they marketed the event,” says Lori Tapahonso, who is Navajo and makes contemporary Native American jewelry. “I wasn’t sure how it would go … I ended up doing extremely well.”

Merello continued to secure free spaces like parking lots, with enough vendor interest (even outside Portland) that she set up a waitlist. In 2019, the Portland Indigenous Marketplace secured a placemaking grant from the regional agency Metro that provided $25,000 for the creation of twelve marketplaces.

The lack of booth fees, which can be several hundred dollars for a single event, was a big benefit for Chriset Palenshus as she grew HerbnHood, her small business selling “botanical products and ovarian swag.” She is Kanienkeha:ka, also known as Mohawk. Selling at mainstream farmer’s markets doesn’t attract the same business or support as the Indigenous Marketplace: “You pay your booth fee and sometimes wonder if it was even worth it,” she says. “At the Indigenous Marketplace, it feels like family. I was around other vendors who supported me and showed me how to do things.”

A supportive community has built around the marketplace. Vendors swap goods they sell with one another. Indigenous Marketplace also hosted vendor dinners, pre-COVID, which included representatives from small-business organizations like the Native American Youth and Family Center, Micro Enterprise Services of Oregon and the Small Business Legal Clinic.

At the beginning of this year, Portland Indigenous Marketplace began the process of establishing itself as a nonprofit. But Merello and the new Portland Indigenous Marketplace Board needed to rapidly transition just a few months later in light of COVID-19. “The jump to virtual has been a big change to all of us, and unfortunately not all our vendors could participate,” she notes. Merello estimates that one-fourth of marketplace vendors do not have an online presence.

It still felt important to continue the marketplaces and support Indigenous small businesses, so they launched the first virtual marketplace on April 25. The second was held on June 27, with a third scheduled for July 25.

Merello uses Zoom and Facebook Live to interview vendors and offer them a platform to talk about their products. Just like in-person events, the virtual marketplaces include Indigenous entertainment — only now it streams from the entertainer’s homes. One accomplishment, Merello says, is getting the Shoshone-Bannock storyteller, poet and writer Ed Edmo set up on Zoom. For both virtual marketplaces, he’s narrated stories and legends he learned from his father. Virtual marketplaces also include speakers from the Oregon Native Chamber, Native American Youth and Family Center and Micro Enterprise Services of Oregon.

Following the first virtual event, the marketplace raised enough money to launch an official website that highlights vendor products. The virtual marketplaces also link to the sales pages for each featured vendor.

“This was my first virtual selling event — we had pretty good instructions coming into it,” says Tapahonso. “I didn’t make one sale that day, but my followers on Instagram and Facebook jumped like crazy. And from there, I’ve sold about $500 worth of jewelry.”

To not lose this Indigenous-centered community — even in light of COVID-19 — has been meaningful for Merello, Tapahonso and Palenshus. “I had a few shows and pow-wows booked that were all cancelled,” Tapahonso says. But for participating in the Indigenous Virtual Marketplace, she received an honorarium: “That’s unheard of!”

“The support that’s continued for the artists has been incredible,” Tapahonso continues. “This space that’s created is very unique, in that it does nothing but focus and center Indigenous artists.”