This Oakland Community Hub Was Designed for Restorative Justice – Next City

This Oakland Community Hub Was Designed for Restorative Justice 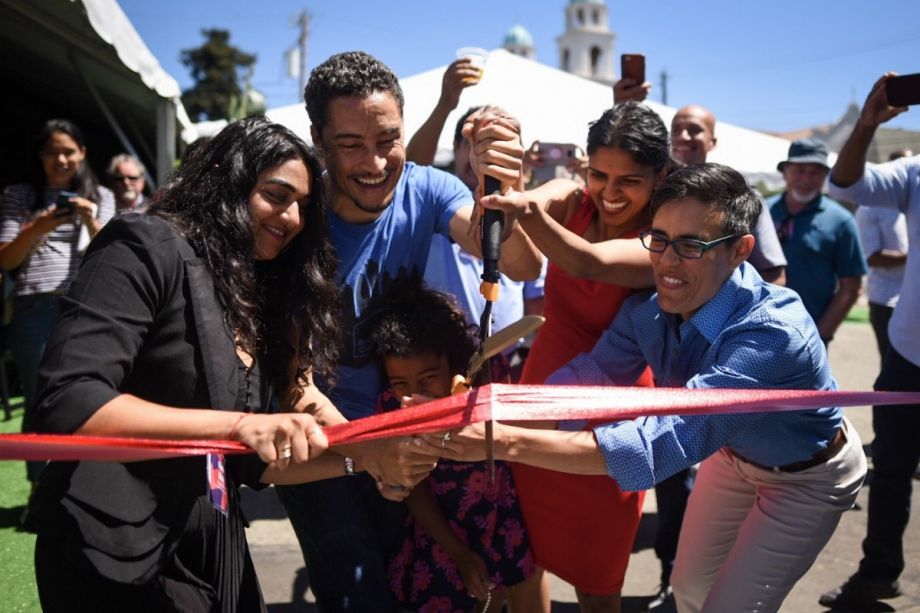 Since the Ella Baker Center was founded 23 years ago to break cycles of poverty and incarceration, it has bounced around to nine different homes across California’s Bay Area. But on Tuesday, July 23rd, any real estate concerns for the nonprofit came to a halt. That day marked the official opening of Restore Oakland, a community advocacy and training center providing free and affordable offices to local nonprofits as well as Ella Baker’s new headquarters. Together, the nonprofit collective offers job training and placement, tenants’ rights counseling, and dedicated space to practice restorative justice.

This innovative East Oakland community hub is the result of a multi-year partnership between Ella Baker Center and the Restaurant Opportunities Centers United (ROC United), an organization working to improve wages and working conditions for people in the restaurant industry.

Beyond providing a permanent, affordable home for local nonprofits in a fast-gentrifying city, Ella Baker Center has a larger vision for the center: to create a space of community safety outside the criminal justice system, for Bay Area residents most impacted by it.

“We’ve started to realize that people are open to looking at ‘alternatives’ to mass incarceration,” explains Zachary Norris, executive director of Ella Baker Center. “But there’s a lack of imagination when it comes to what a new paradigm would look like for community safety. What we’re trying to do with Restore Oakland is put that in building form.”

Back in 2016, Ella Baker Center and ROC United identified the ideal building to do so: a 15,000-square-foot former music store in the Fruitvale neighborhood, right outside the BART train station.

The organizations wanted to purchase and renovate the building without government funding. “If left to government officials, we think the funds will go to the same nonprofit service providers who don’t have a real connection to communities,” says Norris.

An early, anonymous donation of $1 million in 2015 kicked the project off. Oakland-based Akonadi Foundation also provided funding for a feasibility study. That led to fundraising and a loan through Community Vision, formerly the Northern California Loan Fund, to purchase the building.

Norris calls the next phase of funding ‘unprecedented for social justice organizations at the time’: Restore Oakland secured new-market tax credits, more traditionally used to fund affordable housing construction. Ella Baker Center and ROC United also built up its donor base and continued fundraising to get through renovations.

“It makes sense to bring restorative justice and economic mobility work together,” says Saru Jayaraman, president of ROC United. “It’s to make sure people coming out of the criminal justice system, and trying to move out through a restorative justice model, are able to move up ladders in terms of their careers.”

The first floor also holds a housing rights clinic operated by Causa Justa/Just Cause, given the housing crisis across the Bay Area and the challenges securing housing post incarceration. The basement’s design was inspired by grassroots organizing happening in church basements; Restore Oakland’s space will also be used for community meetings and organizing.

The second floor includes office space alongside a dedicated space for restorative justice work. “It’s a space where people will be held accountable and also held in community,” says Norris.

Community Works and Restorative Justice for Oakland Youth run restorative justice circles as a formal, government-supported diversion from the criminal justice system. Jason Toro, executive director of Community Works, explains the process: A trained restorative justice facilitator leads sessions with the person who committed harm and their victim, both of whom are joined by a support person. A community member is also present in the circle. The group discusses the impact of the crime and why it happened before agreeing to a consensus plan of accountability.

For those who complete the restorative justice practice, Restore Oakland’s goal is to then connect them with services and job opportunities provided by nonprofits in the building.

Norris believes it’s deeply important to have a permanent physical space for this work — especially as recent budget cuts in California have challenged school districts’ restorative justice programs. Providing a blueprint, he hopes, will inspire organizations in other cities to create more dedicated space to alternative or transformative justice.

“We need to visibilize the practice and create centers where nonprofits can’t be easily displaced,” he says. “And even though there is not enough dedicated space like we have at Restore Oakland, we’re seeing interest in doing similar things elsewhere.”

UPDATE: We’ve updated the name of one of the lenders of this project after their recent name change. Northern California Loan Fund is now Community Vision.