This NYC Park Is Designed to Be Flooded – Next City

This NYC Park Is Designed to Be Flooded 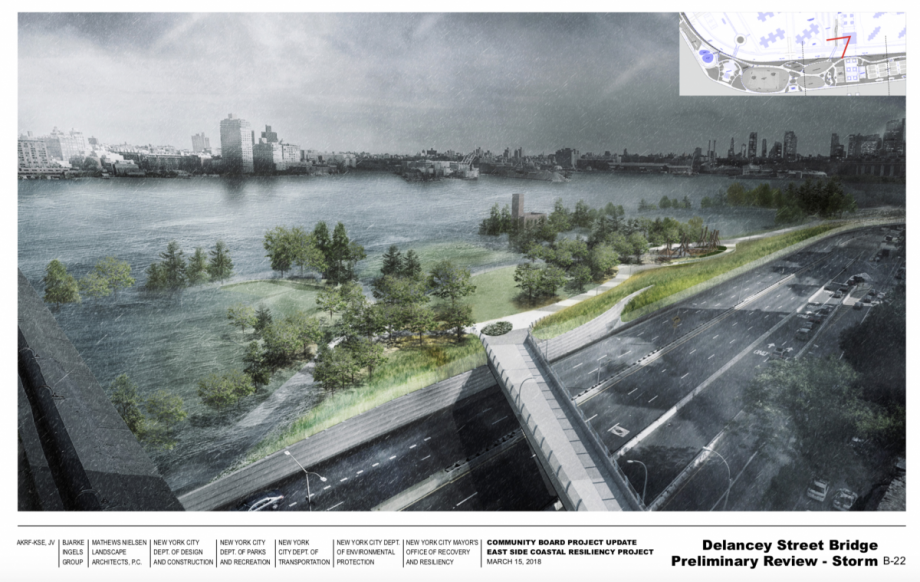 An East River park that will protect residents from storm surges while providing access to the waterfront received some key community feedback this week. A series of designs — showing bike paths and play areas for children that would double as seasonal flood lands — was opposed by Manhattan’s Community Board 3, unless its conditions are met.

From the Architects Newspaper:

Mathew Staudt, senior designer at New York’s One Architecture, told the assembly that the team hoped to rely on flood walls and traditional levees, plus earthen levees as space allows, to minimize the use of functional but not-too-pretty movable gates that can close to protect inland areas from rising waters. The flood protections are built to oppose a 100-year coastal storm in the 2050s, a model that assumes 2.5 feet of sea level rise over the next three-plus decades.

The designs mirror other proposals in the Bay Area and metro Houston, where natural infrastructure like wetlands, marshes are parks are increasingly favored as ways to absorb rising tides and soak up heavy rains.

The park was originally part of the Big U Proposal, developed by BIG (Bjarke Ingels Group) with One Architecture, Starr Whitehouse and others and submitted to the first Rebuild by Design competition. All of the areas Big U targeted flooded during Hurricane Sandy, as Next City has covered, but the project was eventually split into two phases — the East Side Coastal Resiliency Project (ESCR), which just passed the Manhattan board, and the Lower Manhattan Coastal Resiliency Project. The ESCR will be jointly funded by the City of New York and the federal government, and is aiming for FEMA accreditation.

Access played a big role at this week’s meeting, according to the Architect’s Newspaper. Per community feedback, designers adjusted plans for a pedestrian bridge, trading a sloped walkway for a ramp and stairs, and added a new bridge with both a ramp and stairs elsewhere.