This Nonprofit Is Calling out Racism in Unexpected Places – Next City

This Nonprofit Is Calling out Racism in Unexpected Places 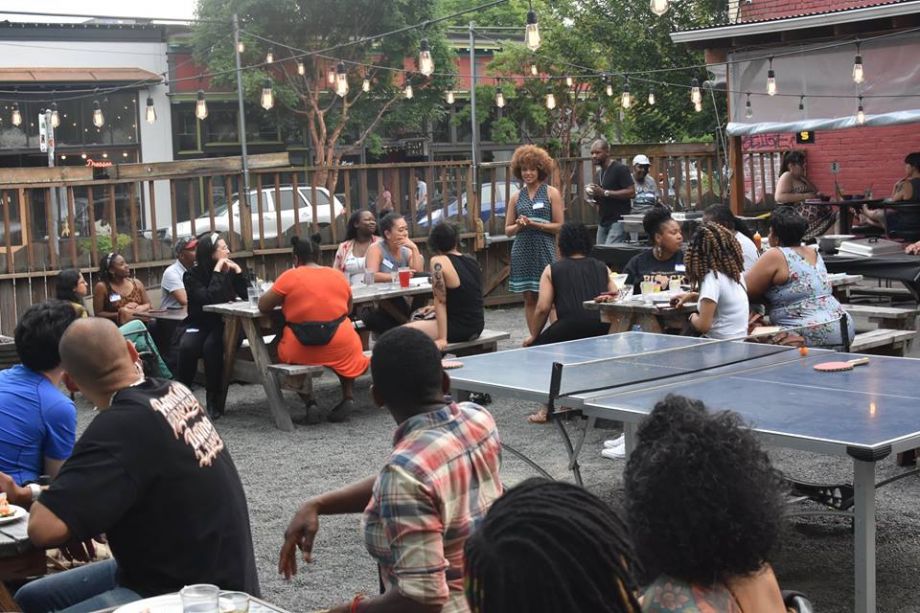 Cameron Whitten describes himself as a “queer, low-income, black person in Portland.” In living here for the past nine years, he says, “I’ve gained a really acute awareness around racism and white supremacy.”

Whitten left Northern Virginia at 18 and landed in Oregon as an accident, he says, residing in a homeless youth shelter and transitional housing. His experience of racism dates to his arrival, when a friend’s father wouldn’t let him stay at their house outside of Portland. “He was uncomfortable to have a black man at his house,” Whitten says. “It was the first time in my consciousness that someone looked at me, and had the power to deny something from me.”

Since settling in Portland, Whitten became a vocal activist with Occupy Portland and eventually ran for mayor. For two years he served as executive director of a local nonprofit, Know Your City, and worked as an advocate for the East Portland Action Plan.

While researching Oregon’s history as he ran for public office, Whitten became aware of the state’s historic racism: the exclusion of “negros, mulattos, and chinamen” from what was then the Oregon Territory, in 1844; the destruction of land and natural resources stewarded by indigenous people; the heavy influence of the Ku Klux Klan in the early 1900s; and mass displacement and discrimination targeting minorities.

To this day, Portland remains the whitest large city in the United States. And it’s strikingly unequal: a 2014 report by Portland State University and the non-profit Coalition of Communities of Color found that black families lag far behind whites in the Portland region in employment, health outcomes and high-school graduation rates. They also lag behind black families nationally.

Still, the city has a progressive reputation. “The racism is so real, and it’s exhausting every time someone is surprised when they hear about [racist actions],” Whitten says.

He believes that Portland’s lack of diversity often results in “performative allyship … white people who think they are the most uniquely qualified to do racial justice work.”

So earlier this year, after unexpectedly losing his job with the East Portland Action Plan, he decided to find “a community solution for racial justice.” He founded Brown Hope, “as an anti-racist organization that would use anti-racist learning to shape its governance style and programming.”

To help secure resources for the nonprofit, Whitten asked white people to show up. He hosted monthly “action team meetings” where his sentiment was: “Hey white people, if you want to show up for racial justice, show up for this because we need resources, and I need to tell you how we’ll use them.”

For Brown Hope, Whitten wanted to ensure the support of white people, but strictly use funding and resources to uplift people of color.

“I’m not trying to shame or exclude people,” Whitten says. “But white people should not be profiting off social equity work … while the people who have to live these things suffer.”

Building off the action team meetings, Brown Hope began hosting Reparations Power Hour, an event for black, brown and indigenous people that offers food, drink and $10 for showing up. Every Power Hour includes a local policy discussion for the group to weigh in on.

“Reparations” are donated primarily by white people. “Racially privileged people can support by GIVING reparations,” Brown Hope’s website states. “Instead of physically attending, your presence will be felt through your active financial support for healing, leadership, and community building within Portland’s black, brown, and indigenous community.”

Soon after the first event, the New York Times profiled it with the title ‘Reparations Happy Hour’ Invites White People to Pay for Drinks.

“Folks were only reading the headline and not the context of the article,” says Whitten. “The narrative was taken from me, put on an international stage, and the intention was lost.”

He’s done work to address questions and critiques surrounding the event, adding an FAQ to Brown Hope’s website. “Are people going to be off the hook for slavery because they gave $10?” the FAQ reads. “No. Brown Hope is elevating the conversation about Reparations, because action is sorely needed on a national and global level. We are taking initiative. While we wait for Congress to do something, we call on folks to imagine what reparations in their own communities could look like.”

Donations for the Power Hour also increased alongside media coverage.

Whitten is still capacity building at Brown Hope; the organization doesn’t have enough funding for him to lead it full-time or hire a staff person. Still, the nonprofit started a vegan pop-up bakery, with the goal of ensuring living wages for black employees, and hopes to launch the Brown Hope Prize to uplift and invest in marginalized Portland neighborhoods.

Whitten continues to call out inequities in the nonprofit field. He points to a recent $1,000 grant, offering technical assistance for minority-led organizations working on racial justice. “It was the most restrictive, exhausting application ever,” he says.

“We express grave concern about the professional and emotional labor expected out of this process — ranging from writing, admin, transportation to a conference, pitching, engaging in live feedback, and networking,” Whitten wrote to the organization. “[A] $1,000 grant is not enough to cover the preparation of this entire package of funding obligations, which adds burden to an already overburdened, under-resourced effort that’s focused on some of our most marginalized communities.”

In response to the letter, Brown Hope was awarded half of the grant. “The only grant we’ve ever applied for, we’ve gotten the money,” he says. “I think people are really craving to invest into this work, and make it move forward.”