This Library Doubles as an Environmental Education Center – Next City

This Library Doubles as an Environmental Education Center 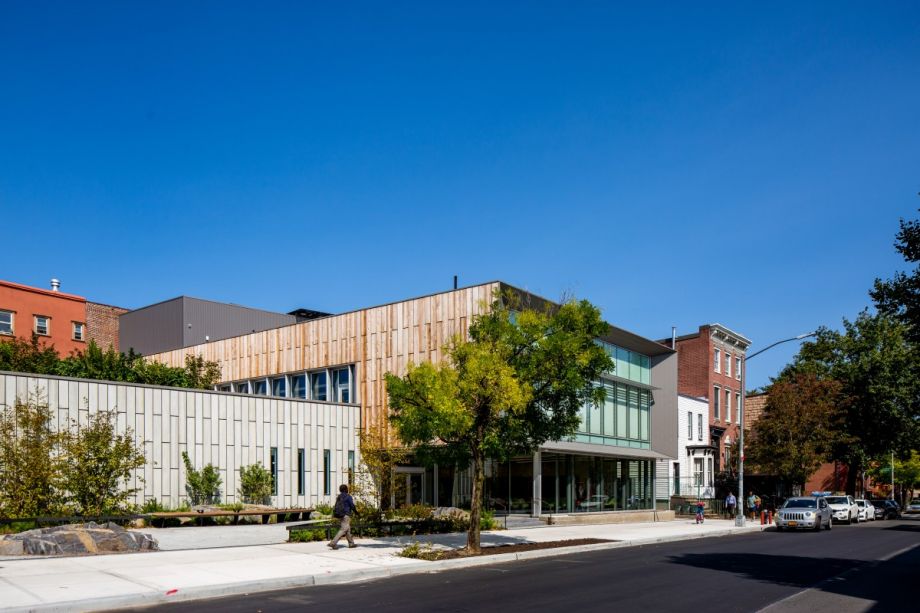 On October 20, the Greenpoint Library in Brooklyn, New York, reopened after a three-year reconstruction. The formerly drab brick building from the 1970s doubled in size and boasts a modern design with ample outdoor space.

What’s more, it’s not just a library anymore. Due to funding from the Greenpoint Community Environmental Fund — settlement money from a severe oil spill that happened under a mile away over more than a century — the building doubles as an environmental education center. Once it’s safe for New Yorkers to gather again, the library will serve as a hub for locals to learn about — and act on — environmental issues.

But Greenpoint Library goes further: After discussions with local community groups, the architects designed two large, flexible “eco labs” with sinks, refrigeration, storage, ample counter space and digital projectors, for community groups to host interactive projects. There’s the cistern to collect rainwater, which Ames O’Neill, project manager with the Brooklyn Public Library, hopes librarians and teachers will use as a teaching tool, and a rooftop garden, which students or local community groups can plant and care for.

“We want people in the neighborhood to understand the importance of sustainability and fighting climate change,” says Linda Johnson, president and chief executive officer of Brooklyn Public Library. “It’s all designed to promote awareness of what happens when we don’t take care of the environment.”

Thus far, the Greenpoint Community Environmental Fund has dispensed $17 million to 47 local projects, but the library is the fund’s first hub to tie together the community’s sustainability efforts. “The grant money has gone to great environmental programming, but it’s all kind of ephemeral,” explains Dewey Thompson, founder of the North Brooklyn Community Boathouse and member of the Greenpoint Library Community Advisory Committee, a group compiled by Brooklyn Public Library to advise on the design and functions of the new building.

“We felt the library could be a brick-and-mortar, highly-resourced hub, and all these existing but much smaller environmentally focused organizations around the community could tap into that central hub,” Thompson continues. “In that way, it really is a legitimate description of the library as an environmental center.”


“Our goal was not just to make this building a model of sustainable building practices, but to have it be a teaching tool,” notes O’Neill. Throughout the building, she adds, there are signs explaining various sustainable building materials, like the meeting room walls lined with wood of trees native to Greenpoint.

There’s now virtual environmental programming with in-person events to come; Thompson is already envisioning how North Brooklyn Community Boathouse will take advantage of the eco labs. “We have something called the Citizens Water Quality Testing Group, connected all over the city, where volunteers go out every week and take water samples, bring it to laboratories and compile that data,” he explains. “It has a history that can be archived at the library and it’s an ongoing activity we could include the library, making presentations to groups and bringing them out on boats to do this fieldwork.”

As for tracking environmental data and community engagement, there is the Greenpoint Environmental History Project, which documents the local environmental history through oral histories and community scanning, in which local residents scan photos, documents and other related materials. The library will highlight portions of the project inside the branch and hopes to offer tablets for patrons to peruse the collection, which is fully preserved in a digital format.

Both O’Neill and Johnson emphasize that in the age of digital technology, libraries have to be both creative and flexible when it comes to dispensing information. “Library service and technology will evolve over time, and having different ways to support different services throughout the building is important,” O’Neill says. Johnson called it “a great example of what a library should be in the 21st century.”

It’s unique, however, that this library seized the opportunity to engage its visitors about the future of the planet, suggesting there’s an important role for libraries as we increasingly confront the climate crisis.

“It’s very important to have a space,” Thompson says, “But to have a space so beautifully and purposefully designed to support this conversation and work? It’s just awesome.”

Editor’s note: We’ve corrected the attribution of two quotes in this piece.