This Food Truck Owner Wants to Decolonize Your Diet – Next City

This Food Truck Owner Wants to Decolonize Your Diet 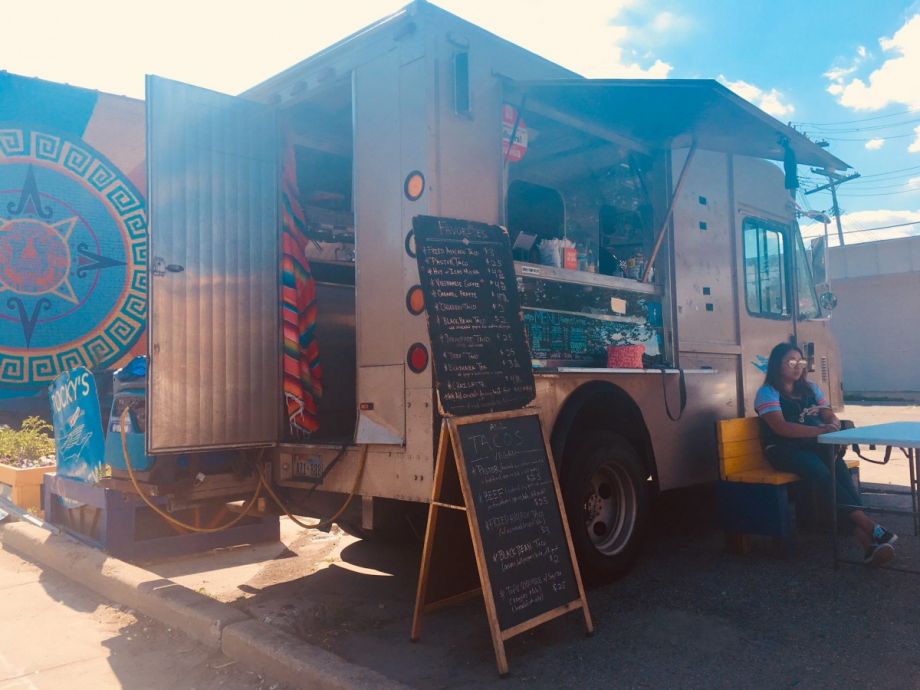 Southwest Detroit’s main thoroughfare, Vernor Highway, looks like many blue-collar post-industrial Rust Belt cities, with dive bars and “party stores” — the local colloquial for liquor stores — tucked into many of its street corners, dating back to the days when factory workers could walk from their manufacturing jobs to the corner bar, spend their earnings and stumble home. The factory jobs may have gone long ago, but somehow the after-work tradition persists. It may have something to do with the higher rate of alcohol-related deaths in Michigan than the national average.

The area, also known as Mexicantown, also a reputation as a dining destination for its many immigrant and Chicanx-owned food businesses where residents stock up on fresh produce and specialty ingredients traditional to Mexico, Central and South America, and the Caribbean. Here there is no shortage of taquerias, Mexican bakeries, mofongo spots and mangonada stands.

Understanding and untangling all those mixed histories and cultures may offer more than a fascinating cultural study of such places, it may also help divine a solution to ill health and alcohol-related deaths in Mexicantown and maybe even other predominantly Latinx or other communities of color in cities across the country. The solution is known as the “decolonized” menu or diet, and Southwest Detroit food truck owner Rocky Coronado is one of its evangelists.

Southwest Detroit, like many of the city’s neighborhoods, is also home to a growing number of community and backyard urban gardens, and urban farms, run by immigrants and families of color. A number of business incubators designed to support the work of food businesses within marginalized communities are also concentrated in the area. Perhaps that’s why Mexicantown felt a little bit like home for Coronado, who moved here from East Austin in early 2017.

One thing that was missing, Coronado says, was a place to get a good fresh-fruit smoothie. So Coronado, owner of Rocky’s Road Brew — originally a cold brew coffee truck in Austin — decided to shift their business and start making and selling brightly-hued avocado smoothies, vegan tacos al pastor (with soy protein), herbal teas and other plant-based food and drinks.

Looking around Clark Park, the neighborhood’s iconic central park, Coronado has begun to see a shift in what residents are putting into their bodies. They can’t help but wonder if their food truck had a little something to do with that shift.

“Since I been out here I see so many more people walking around … with smoothies, and everybody wants one, even if they don’t want the vegan tacos, they’re just all about the smoothies, or the herbal tea. Even with the mangonadas (place down the street), you got the fruit cups,” Coronado says. “People want it, it’s just not fucking available.”

Business has been so good, Coronado recently acquired a building that housed a former dive bar just a few blocks from where they usually post their truck and now plans to open Damelo Cafe. The reimagined space would build on the food truck’s current menu, while also expanding on the concept of the decolonized diet.

The UC Berkeley Food Institute describes the decolonized diet as being liberated “from the colonial relationships of food production and consumption.” Decolonized diets rely on ingredients and food preparation techniques that date back to before colonization in Chicanx, Mexican, Native American and other indigenous groups around the globe. The concept is growing in appeal for its principles of using food ancestral to indigenous people to heal and nourish those communities and their descendants.

Proponents see decolonized diets as more than a means of preserving culture; they believe forgoing corporate, homogenized food structures has the potential to act as a form of resistance against modern-day oppression, in particular with regard to preventing and treating physical as well as mental illness. Prominent supporters include Luz Calvo and her life partner Catriona Rueda Esquibel, authors of one of the most prominent recent published works on the subject, the “Decolonize Your Diet” cookbook.

Luz, a professor of ethnic studies at Cal-State East Bay, was diagnosed with breast cancer in 2006. That diagnosis forced the couple to radically change their diets and look for recipes featuring healthy, vegetarian, Mexican foods. The book, published in 2015, promotes a diet rich in plants native to the Americas such as corn, beans, squash, greens, herbs, and seeds.

The statistics are clear — Latinxs in the United States, like African Americans and other marginalized groups, are far more likely to experience health complications brought on by eating habits, resulting in higher rates of diabetes, heart disease, and other illnesses. Processed junk foods commonly found in convenience stores, bodegas or in Detroit’s party stores in underserved communities is tied to these rates.

Moving away from those harmful foods toward more of a plant-based diet that sustained indigenous communities for centuries before being colonized is a means of combating all that, supporters say. Some go so far as to include alcohol abuse as part of the “colonized diet.” In the United States, Hispanics who drink are more likely to drink at higher levels than whites, according to the National Institute on Alcohol Abuse and Alcoholism. And of those who drink, 33 percent of Hispanics who become alcohol dependent have recurrent problems, compared to about 23 percent of whites.

Coronado says when they first moved to Detroit at the start of 2017, they had the opportunity to open a bar with some friends.

“Seeing what liquor does to people, I was like I don’t wanna fucking do that,” Coronado says.

Coronado, like other existing business owners in the neighborhood, sees both danger and opportunity ahead. The soon-to-be chef of Damelo Café has seen it before. Like the east side of Austin, where Coronado spent much of their youth and where housing prices continue to skyrocket, residents of Southwest Detroit are increasingly concerned over the threat of gentrification.

Housing prices in Southwest Detroit have shot up in recent years and a number of new food and drink places owned by outsiders are starting to show up near the more established eateries, to the angst of longtime residents.

Most dramatic is the recent announcement that Ford Motor Company would develop the long-abandoned Michigan Central Train Station in Mexicantown into a new technology and mobility hub. The move will bring 2,500 Ford jobs to the area. (The train station is commonly referred to as being located in the adjacent Corktown neighborhood, though that’s often disputed by residents of Mexicantown.)

The changes make for a unique opportunity for food businesses like Coronado’s — Latinx-owned and aimed to nourish the existing Latinx community.

Facing a liquor store across the street, Coronado’s truck is regularly visited by residents who drop off produce or joke with them while waiting for the bus or passing by on a bicycle. To Coronado, it’s this connection to the existing community that tells them Damelo will be well-received once it’s up and running, probably sometime next year.