This California City Now Guarantees All Tenants a ‘Right-to-Lease’ 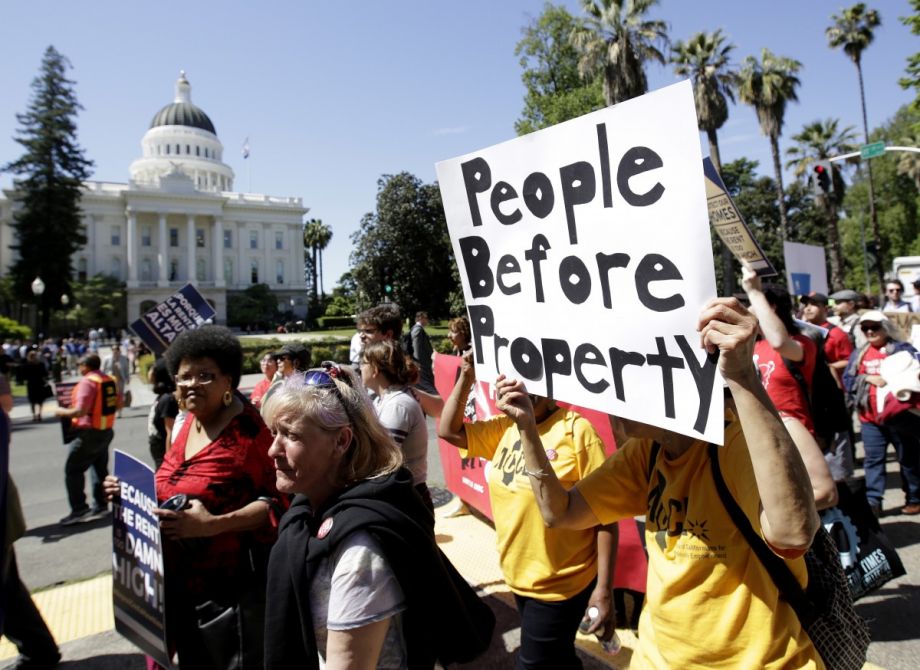 In this April 23, 2018, file photo rent control supporters march past the Capitol in Sacramento, California in support of failed ballot measure Proposition 10, which would have reduced constraints on local rent control laws throughout the state. (AP Photo/Rich Pedroncelli, File)

Rents are rising so erratically in Glendale, California, that in the last few years, Peter Zovak, the assistant director of community development for the city, has talked to tenants who’ve been hit with three and four rent increases in the course of just six months, and others whose rent was raised as much as $800-a-month in one shot. Nearly two-thirds of households are renters in Glendale, one of the largest cities in Los Angeles County. There are 49,000 rental households in all, Zovak says, so the statewide housing crisis has hit tenants particularly hard there. Tenants have been pushing officials for some kind of relief.

“We’ve had two resident-driven ballot initiatives that were taken out, and both failed to garner enough signatures to place rent control on the ballot,” Zovak says. “But it did demonstrate that there is a concern and a possible need for coming up with some type of measure to help protect tenants.”

Now, after a two-month rent freeze, the city council has approved an ordinance that requires landlords to offer existing tenants an additional one-year lease on their apartments, rather than defaulting to a month-to-month agreement, and to pay for relocation costs if they plan to raise the rent by more than 7 percent.

The policy was developed by city staff after the city council indicated that it wouldn’t enact full rent control last fall, Zovak says. According to a report in Curbed Los Angeles, the council heard complaints from two opposing groups before approving the ordinance last week: landlords think it’s overly regulatory and tenants feel like it doesn’t go far enough.

For Mike Van Gorder, an organizer with the Glendale Tenants Union and a former candidate for city council, rent control is the most serious way to protect tenants with limited incomes. The policy that the Tenants Union drafted would have capped rent increases at 4 percent per year and established a rental review board to oversee enforcement of tenancy laws. Twice they tried to get the measure on the ballot, but both times they failed to gather the required 10,000 signatures. Van Gorder says the voter-led initiative process needs to catch up to the digital era, but also blames the landlord class for telling tenants that they had to raise their rents before rent control went into place. When the second effort failed last August, the Tenants Union changed course.

“When we tried to turn in the signatures and we didn’t have enough, we were like, ‘Hey, City Council, your city is two-thirds renters. We are in a direct crisis and you’re letting it happen, so you’ve got to do something substantial,’” Van Gorder says.

The following fall, housing advocates around the state were debating Proposition 10, which would have removed some statewide restrictions on cities’ ability to enact rent control. In November, the measure passed by a small majority in Glendale, but failed decisively across the state. Shortly after, the city council began debating a local rent-control policy. Zovak, the assistant director of community development says that that plan, which would have capped rent increases between 5 percent and 7 percent, was informed by the the challenges facing renters but also conversations with small-time landlords, who said they needed to be able to raise rents by 5 percent and weren’t trying to squeeze their tenants.

According to reports in the L.A. Times, Mayor Zareh Sinanyan had gone back and forth on rent control as a policy, but as of September 2018, he was reportedly in favor. He ultimately had to recuse himself from the vote, and without his vote there wasn’t enough support on city council for rent control. (Sinanyan was not available for an interview.) Instead, the council enacted the short rent freeze and directed city staff to develop a different policy for tenants.

At one point, the city considered a policy that would bring tenants and landlords together into “rent mediation,” which would have been a non-binding process wherein they would negotiate over rent. But that policy had little support from tenants.

“We say, ‘Hell no, this is absurd, rent mediation will do absolutely nothing to protect us,’” Van Gorder says. “It’s something they can take to their constituents and say, ‘Look, we tried something,’ but it doesn’t actually do anything.”

Ultimately, the city settled on a strategy of adjusting its just cause eviction ordinance to require landlords to offer one-year lease extensions and pay moving costs when they raise the rent above 7 percent. Van Gorder says the policy is still insufficient, and blames the council for giving in to landlords over rent control.

Zovak says the council believes the policy is a good way to help tenants who are being hit with the most “egregious” rent increases, and believes the city will take some time to analyze its impact before discussing rent control or other tenant-protection policies again.

“I would like to think that it’s the period [at the end of the sentence],” Zovak says. “I think we need to give it time to work and see what it could do.”