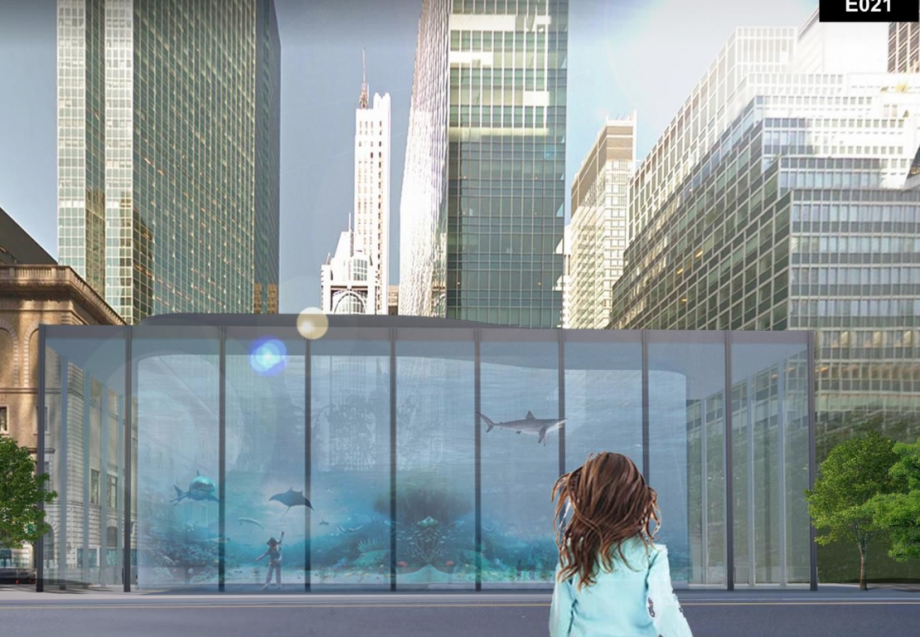 The medians of Park Avenue, New York, are today characterized by simple rows of tulips and begonias and the occasional sculpture installation. If the recently-announced finalists of a local design competition have their way, however, those medians could someday house a mini-golf course, a Matterhorn-like artificial mountain or a tank full of sharks.

That final proposal, an aquarium in a block full of glass-walled Fortune 500 companies, implies a “tongue-in-cheek connection,” finalist Eric Spencer told the New York Times. “You know, the classic stereotype, guys and gals on their phones, sharks, doing their thing,” he said.

The privately-funded competition, Beyond the Centerline, was announced by developer Fisher Brothers last November. Its stipulations: Come up with a proposal to “enliven Park Avenue’s commercial district” using the medians between 46th and 57th streets. In March, the jury, including Vishaan Chakrabarti of PAU and Signe Nielsen, of Mathews Nielsen Landscape Architects, among others, will announce a winner, who will receive $25,000, according to Curbed.

The 17 finalists certainly took that “enliven” part seriously, although practicality and fiscal planning seem to be in short supply. It’s hard to imagine a scenario in which the city would approve “Mount Manhattan,” for instance, a 20-foot wide slice of artificial mountaintop towering over the avenue below — even if it did feature a “summit, overlooks, a ravine with a rope bridge, caves, hills, cliffs, trails, a narrow lake with extensive waterfalls and even an alpine lodge,” as the proposal details. And the city does control those medians, so anything that would be built there would need to go through the standard public process.

But practicality wasn’t necessarily the point of the competition, Winston Fisher, a partner with Fisher Brothers, told the Times. He pointed to the design competition in 2003 that sparked the High Line — for that contest, finalists included a roller coaster and half-mile long swimming pool.

“The point is to focus our attention on things that are right in front of us and the possibilities there are,” he says.