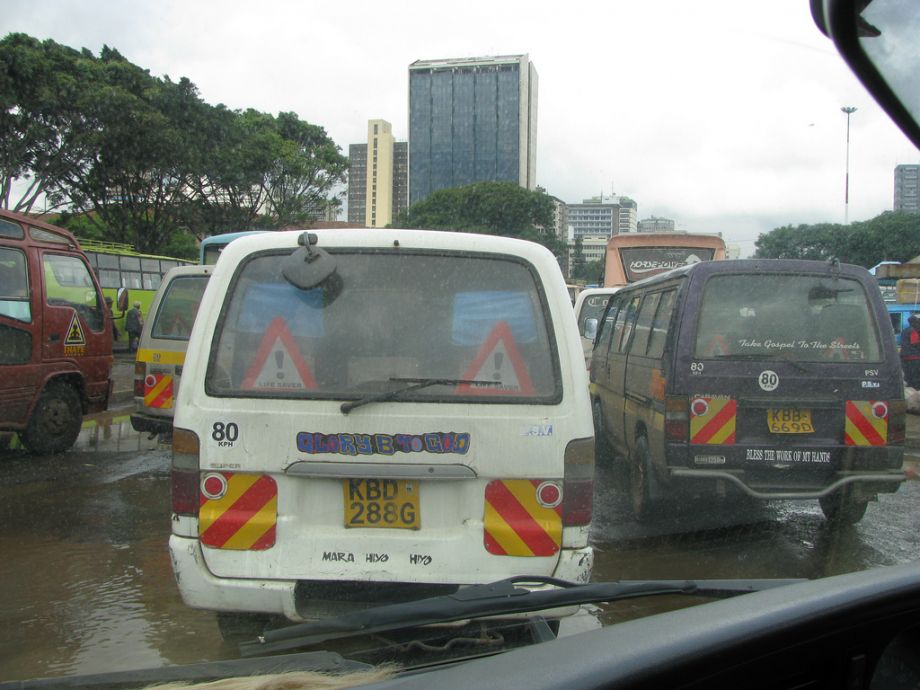 With no comprehensive formal transportation system, Nairobi relies on its matatus despite their flaws. Photo credit: shankar s via Flickr

How do dozens of competing private bus companies keep a city’s public transportation system running without any formal planning? With a lot of success, it turns out. That’s according to a new map of Nairobi’s infamous matatu minibus system released last week.

Matatus—the thousands of white, 14-passenger minibuses that ply hundreds of routes in Nairobi and comprise the vast majority of the city’s public transportation—make up an almost totally informal and unregulated system. Horns and stereos blaring, they crisscross the city with little regard for traffic laws, stopping abruptly to pick up passengers and changing their routes and fees without notice. Their erratic behavior is blamed as a chief cause of Nairobi’s traffic jams, which cost the city nearly $600,000 a day, according to the city government.

But a remarkably standardized system underlies the discord on the surface, as revealed by the new Digital Matatus Map, created through a collaboration between the University of Nairobi’s Computing for Development lab, MIT’s Civic Data Design Lab, Columbia University’s Center for Sustainable Urban Development, and design consultancy Groupshot. The map reveals a pattern not so different from that of some formal mass transit systems, in which matatus disperse along major roads from the city’s center, before forming branches to serve local destinations. There are even instances of “local” and “express” matatus operating in concert.

“I think this [map] exposes that the city really does have a system and that the government should recognize that system and hope to regulate it,” says Sarah Williams of MIT, one of the project’s leaders.

The apparent order might shock anyone who’s navigated a multi-matatu journey through Nairobi gridlock, but it also shows how informal systems can respond to diverse needs across a city.

“You can see the development patterns clearly in the map,” says Williams, pointing to a spiderweb of routes in east Nairobi’s working-class neighborhoods compared to neatly spaced paths in the city’s wealthier west side. “I was surprised by the kind of detail-oriented nature of some of these routes… It mimics the densities of the city.”

Finding the data to create the map was no simple process — the city doesn’t keep available and current records on where they run, and new routes are constantly added as the rapidly growing city builds more roads. So a team of University of Nairobi graduate students rode every matatu route in the city, cataloguing the stops with GPS devices and smart phones loaded with tracking apps.

The result is the most comprehensive map on matatus to date, charting 102 different routes and hundreds of designated and undesignated stops. (The team discovered at least 16 more routes since making the first map). Henry Ochieng, programs director of the Kenya Alliance of Resident Associations who works closely on transit policy, says all this data is most useful because it finally provides the city with reliable information to plan its transportation infrastructure. “You cannot do a policy or a plan without having a clear understanding of where the public vehicles operate or the stages,” he says.

In particular, Ochieng says the current data can better designate bus stops. The researchers found that the vast majority of Nairobi’s bus stops are undesignated: matatus stop in the middle of the road to pick up passengers, blocking traffic. Since the few designated turnouts were made forty years ago, they no longer correspond well to today’s city, so matatus create their own. Ochieng says that by formalizing the more convenient informal stops, and doing away with the old ones, the city can ease traffic flow while still meeting passengers’ needs.

All the data gathered has been made available to the public so that Nairobi’s mobile-technology-obsessed population can better engage with transportation. “By visualizing this informality you’re giving a voice to every rider who is on this matatu route,” says Williams. “They can say, ‘Hey, I ride this route. You need to provide access to this.’ ”

Already, Kenyan techies are using the data to improve apps that calculate the fastest route between two bus stops, while others are developing programs that crowdsource data from smart-phone-toting matatu passengers on crime, accidents, or pollution. Another app, to be linked with a mobile payment system for matatu riders called Beba Pay, calculates the correct payment for a rider’s trip to combat arbitrary pricing.

As the informal matatu routes continue to shift, riders could eventually be able to update the map themselves using the same mobile tracking apps as the researchers. “I kind of think of it as the bottom-up smart city,” says Williams. “We’re holding sensors all the time. Your phone is a sensor, and it can collect information about your city, whether it’s about the matatus or about where schools exist or where public bathrooms are.”

Still, those involved in the Digital Matatus project caution that a map alone won’t solve Nairobi’s traffic woes. Matatus remain an inefficient, expensive system in serious need of regulation. But if city officials incorporate the data, they could reform the matatu system by learning from its strengths.