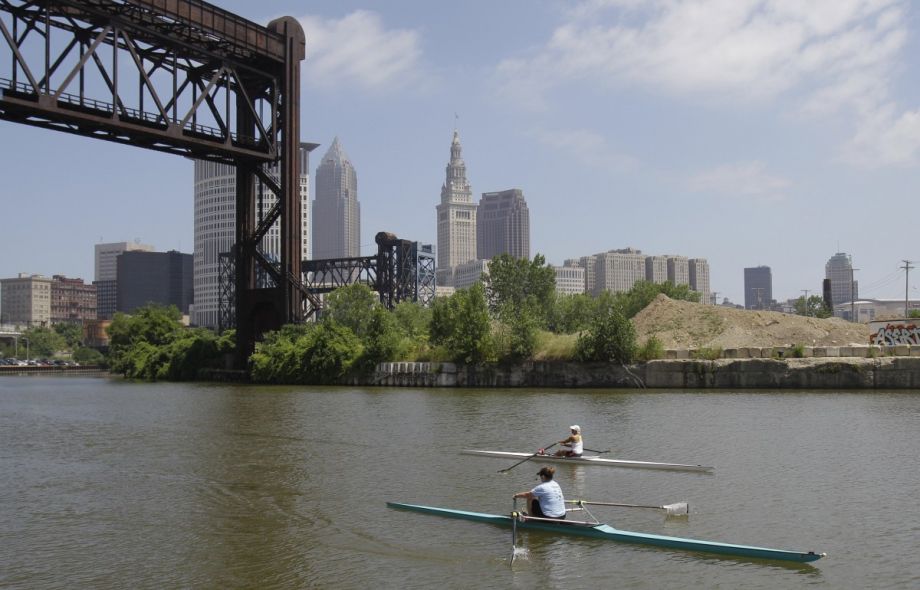 As a postindustrial city in a politically important swing state, Cleveland is used to the “Rust Belt” question: Is the city “coming back,” or continuing on a slow decline?

When the Republican National Convention descended on the city last summer, a writer for Columbia Journalism Review noted that some locals feared that political violence would play into a simplistic narrative of decline, but instead, “the protests outside of the convention have been remarkably quiet. And national media’s laser-like focus on political pageantry has instead fit into the city’s simplistic narrative of renewal.”

As residents of struggling cities across the U.S. know, and as Cleveland State University history professor J. Mark Souther argues in his new book, “Believing in Cleveland: Managing Decline in ‘The Best Location in the Nation,’” revitalization and decay are two sides of a coin, especially when seen from the wide angle of a metropolitan area. In the middle of the 20th century, inner cities began to suffer as suburbs flourished; in the last decade, downtowns have bloomed while many urban neighborhoods have continued to languish. “Believing in Cleveland” is aimed at “undoing the notion of decline and comeback as a sequential, unidirectional phenomenon,” Souther writes in the introduction.

That notion has been punctuated by various urban successes and failures. And it’s been fed by city boosters who were, in some cases, “too quick to declare victory,” Souther says. In other cases, business and civic leaders expressed private doubts about the gung-ho proclamations they made in public. Concerned about real problems facing the city — a loss of industrial jobs, the dimming of downtown commerce, racial tensions and riots — leaders in Cleveland gradually became more preoccupied by the city’s image locally and in the wider world. Those concerns grew to the point that the image of the city “took on a life of its own,” Souther says. Managing the city’s image eventually became its own exercise, connected to but distinct from more concrete measures of urban vitality.

The narrative of mid- to late-20th-century Cleveland, in Souther’s re-examination, was studded with a few key events that have, for better or worse, come to be seen as turning points in the city’s story.

Subway Defeated Twice
In the mid-1950s, efforts to build a subway system serving downtown Cleveland had public traction. In 1953, 65 percent of voters approved a $35 million bond issue to fund the project. But the project was defeated by a 2-1 vote by the County Commission in 1957, and again after a last-ditch attempt to revive it in 1959.

In the interim, the narrative had changed. In the early going, the subway system was pitched as a way of relieving automobile congestion in a growing downtown. By 1959, Clevelanders had begun to believe that the downtown was declining, and subway advocates pitched the project as a way of reversing that trend. Neither pitch was successful, but the differing rationales illuminated the city’s changing image.

“[Clevelanders] start to lament that downtown is losing its hold on suburbanites,” Souther says. “Suddenly the subway converts from being a tool for keeping downtown strong to reversing what people are starting to talk about as a decline. And that happens pretty sharply.”

The Glenville Shootout
In 1968, Cleveland’s Carl Stokes became the first elected black mayor of a major U.S. city. His election was a “beacon of hope” in the city and the country, Souther says, and civic leaders expected him to somehow bring an end to riots that had ravaged the neighborhood of Hough in the summer of 1966.

But in July 1968, a four-hour shootout in the Glenville neighborhood between police and a black militant group resulted in the deaths of seven people, including three police officers and three suspects. The shootout was followed by incidents of arson and property damage. Stokes had wrapped his early mayoral efforts under the heading of “Cleveland: Now!,” an initiative to raise funds for community development projects. But it soon came to light that some of those funds had been granted to a member of the group involved in the shootout.

“There was already this sense that, ‘Well, Stokes hasn’t done what we thought he could do,’” Souther says. “‘He hasn’t stopped another outbreak of racial violence. And then when it became known a little later that the Cleveland Now! funds had been misused in this way, that was just further support to this idea that we need to move in another direction.”

Cuyahoga River Fire
Perhaps no single event tarnished Cleveland’s image as much as a fire that broke out on the polluted Cuyahoga River in 1969. But while the event served as an easy symbol of urban crisis, it also became a rallying point for the environmental movement, culminating in landmark environmental legislation in the early 1970s.

The symbolic significance of the 1969 fire distorts the reality too: The river had ignited many times before that event. Time magazine ran a picture from a different fire on the river in the 1950s, because it couldn’t find any dramatic photography of the event in question. On the day of the event, Souther says, “Most Clevelanders weren’t even aware there was a fire.”

“If you look back at the 2016 Republican National Convention, if you read anything about Cleveland, they used that familiar refrain about the burning river and how Cleveland had bounced back since that time,” Souther says. “And they really reduced the city’s narrative to one of growth and then decline, down to the point of 1969, and then this impressive comeback.”

In fact, Cleveland’s struggles deepened throughout the 1970s — they continue into the present — but the Cuyahoga River fire serves as a symbolic lowpoint in a linear narrative of decline and revitalization.

Throughout the 20th century, Cleveland’s “growth coalition” — a loose affiliation of civic and business leaders — adopted a variety of slogans to brand the city’s image. An early slogan, which provides the subtitle for Souther’s book, was “Best Location in the Nation,” an invitation to industry to make headquarters in the city. Later the city adopted a different slogan, “The Best Things in Life Are Here,” emphasizing an emerging consumer society. But the superlatives began to seem like a joke, countered by unofficial monikers for the city like “Mistake on the Lake.”

“By the late 1970s,” Souther writes, “any Cleveland image campaign that promised the best of anything was untenable, so boosters began to craft the image of a ‘New Generation’ of public-private cooperation to propel the city forward.”

By 2015, the Downtown Cleveland Alliance was promoting a more prosaic slogan: “You Are Here.” What Souther’s book argues is that Cleveland’s considerable attempts to promote and manage its image are as much a reaction to fears of decline as they are efforts to define the city.

“In a place where people are perceiving decline, they’re always looking for the turning point,” Souther says. “Where’s the pivot? Where’s the fulcrum? You’ve got to find the fulcrum, and that tends to lead to these constructions of narratives that obscure as much as they reveal.”