There’s Community Vision in These Business Corridor Plans – Next City 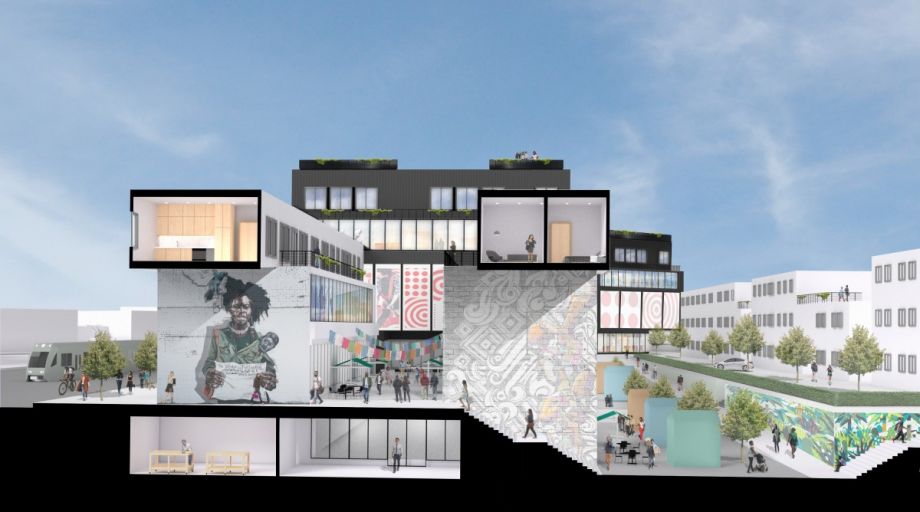 “Pink zoning” might be a term that urban planners comfortably use across the U.S., but for some Detroiters concerned about gentrification, it can sound like a threat.

The phrase refers to the removal of red tape associated with a city’s zoning regulations that can stymie a development project.

But during community meetings this year about reactivating three commercial corridors in Detroit, residents of the majority-black city were put off by the terminology.

“People thought about the color of flesh, and thought, are these rules meant to gentrify African-American communities?” says Maurice Cox, the city’s planning director.

In response, a team of designers and city planners involved in the community engagement effort got intentional and came up with a Detroit-centric term: “mix tape.”

“It’s more about mixing uses, cutting and splicing things together, to create something new,” says Cox, whose office led the initiative. “It speaks directly to Detroit’s contributions to blues, jazz, techno, and we thought, that’s brilliant.”

The Mix Tape project was on display at the recent Detroit Design 139 exhibition, in September, which called on urban designers to propose projects for the future of Detroit, drawing on the city’s legacy of innovation and prioritizing inclusive design. The exhibition was organized by the city of Detroit and commercial real estate firm Bedrock. (Next City’s publisher, Tom Dallessio, was a member of the exhibition’s jury.)

Mix Tape is just one of many efforts afoot to revitalize the city’s commercial corridors.

In October, Mayor Mike Duggan introduced a proposal to put $125 million in bond funds toward the revitalization of business districts outside the downtown area with an eye to attracting retail investment. The mayor’s office says the effort could recapture some of the estimated $2.6 billion in spending Detroit residents do every year outside the city, according to a study soon to be released by the Detroit Economic Development Corporation (DEGC).

Meanwhile, the two-year-old Motor City Match program has given at least $3.9 million in grant money to help entrepreneurs open brick-and-mortar locations — with an emphasis on businesses in marginalized neighborhoods.

For Mix Tape, designers from the public and private sector, along with local business owners and residents, met in a series of focus groups to discuss some of the challenges that people face when they want to redevelop real estate along commercial corridor districts. They looked at two strips on the opposite ends of Warren Avenue and an empty lot on Gratiot Avenue near Detroit’s Eastern Market, a popular fresh food market.

While the specific plans that were proposed for Mix Tape have not yet been approved, they’re aimed at the neighborhoods where Duggan’s proposed bond funds would be going.

On East Warren Avenue, between the Morningside and East English Village neighborhoods, the business district is largely vacant, but anchored by the historic Alger Theater and a public library branch. Efforts are underway to rebuild the theater’s rooftop terrace, repair the auditorium ceiling and rewire the marquee. In the meantime, ideas include creating a mix of zoning for retail and light industrial. This would make room for a live-work space for artists. There’s also a desire to turn underutilized parking lots into outdoor community spaces.

Helen Broughton, a member of the Friends of Alger Theater, attended two Mix Tape focus groups to help inform the design team. From her end, she says she was able to communicate what the friends preservation group had already done.

“I thought that approach was good because community members were there to share, on the ground level, what was going on in the corridor,” Broughton says.

On the west side of Warren Avenue, recommendations call for a “strip retrofit,” including development of duplex and townhouse-style housing on empty lots between commercial properties and concentrating existing retailers within a two-block center to establish an identity for the corridor — thus creating a sense of density and safety.

The Mix Tape designers envision the Gratiot Avenue site as an ideal location for a big box retailer (which would be high in demand in Detroit, where there’s a dearth of large, national retailers within the city limits), dense multifamily housing, and office space. To make that happen, planners would have to rezone the site to allow for a mixed-use development.

The ideas floating around for this location have already influenced developers’ plans. Earlier this month, Detroit-based real estate firm The Platform announced that it was brought on to redevelop the site.

Cox says the developer that purchased the site sat on the Mix Tape advisory group and was so taken by the zoning recommendations that they purchased the property with the intent to further explore the project’s ideas.