Play Asks Audience to Confront Discomfort Over Homelessness – Next City 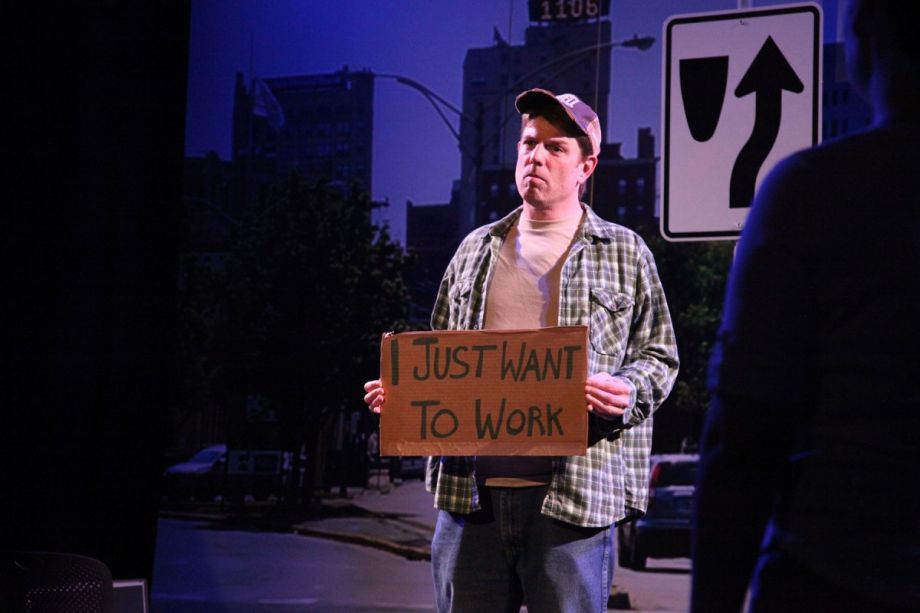 It’s a Friday night in Portland, Maine, and I’m doing something I never thought I’d do: I’m really enjoying watching a reenactment of a city council meeting.

I’ve sat through plenty of council meetings over the years, but never before as entertainment. In the hands of the Snowlion Repertory Theater, though, the scene is gripping. Actor after actor approaches a lectern and addresses the audience as though we were Portland’s council members, about to make a controversial decision that will affect untold livelihoods. It’s made all the more compelling by the realization that the audience is fully implicated in the story, that the problem remains unsolved, that it goes raging on right outside this theater.

That problem is homelessness, and the play’s co-authors, MK Wolfe and Al D’Andrea, tackled it by investigating what they call “the median strip controversy.” In 2013, Portland’s council voted to ban anyone from sitting or standing on median strips. There had been a spike in visible poverty and homelessness in the city, and panhandlers — or “signers” — could be found flying signs in the medians of nearly every major street leading into Portland.

Supporters of the ban said it was a public safety issue: People on medians were basically standing in traffic, an accident waiting to happen (though they could produce no evidence that accidents had occurred). Opponents said the ordinance was really designed to clear the poor from public space. Who, after all, sits or stands on medians except signers begging change?

The ordinance was controversial from the start. Dozens of residents showed up at council meetings to speak for and against it. After it passed, the ACLU took the city to court, and won. They argued that the ban infringed uniquely on the free speech rights of the panhandlers. Some of the same councilors who supported the ban, it turned out, had allowed re-election signs to be placed on those same medians, in violation of the ordinance.

Though the battle was over, Wolfe and D’Andrea saw the controversy as a lens through which to dramatize the thornier aspects of Portland’s ongoing struggle to provide for the poor.

“Homelessness and poverty is such a vast subject,” says D’Andrea. “There’s an old saying in theater, ‘In general is the enemy of art.’ The median strip controversy was our specific, factual story through which we could look at more universal issues of homelessness and poverty, in the absence of which it’s just too much to talk about in a two-hour play.”

To create the docudrama, “Anything Helps, God Bless,” the co-authors enlisted a cast to comb through council meeting recordings and court documents, and sent them out to interview dozens of people involved. The actors spoke to politicians, lawyers, prominent supporters and opponents, and around 15 signers in order to recreate them as characters. Besides narration, the entire show is told using the language of the people closest to the issue. The actors were also asked to keep diaries throughout the production’s creation. They read some excerpts aloud as part of the show, giving voice to both their higher intentions and some of their less charitable reactions.

“I feel vulnerable when I imagine rolling down the window and giving the person money,” read one actor. “Not vulnerable to what the person begging might do to me, but to what people who see me giving away my money might think of me. So, to avoid all those uncomfortable feelings, I wish they weren’t there.”

“My thoughts on panhandlers make me ashamed,” read another. “When I see one in the median, my immediate reaction is to lock my doors, roll up the windows, and stare straight ahead. … I have to take on this project because I feel morally obligated to tell this story.”

Of course, if I’m being honest with myself, I’ve had all these reactions. Homelessness remains a huge challenge in Portland, and I pass people flying signs nearly every day. That’s the point, says D’Andrea: “The actors could become, for the audience members, a way into the personal experience of the play.”

I’m just a visitor to Portland, but in the dark intimacy of the theater, I realized most of the audience members were probably here at the height of the controversy, and still struggle with these questions. Adding to the confrontational nature of the piece, the cast created an online survey asking people about their relationship to signers, and included the questions and answers in the show.

“Do you look at signers when you’re stopped at a red light?” asks one performer. A series of actors call out in response, “I look directly at them and am totally comfortable – 13 percent.”

“I look directly at them, but find it uncomfortable – 10 percent.”

“I do not look directly at them and that makes me comfortable – 3 percent.”

“I do not look directly at them and remain uncomfortable while stopped – 48 percent.” (Another 24 percent responded “other.”)

“That really revealed, to each of these respondents, the complexity of their feelings about it,” says D’Andrea. “Hopefully the audience is there answering the questions for themselves.”

He and Wolfe see their dramatization as a way to keep the conversation going. During intermission at one performance, Wolfe overheard a man say that during one of the city council meeting reenactments, he had been swayed by each subsequent person’s testimony: that the ban infringed on free speech, that a drunk person standing in the median was putting their life in danger, that the ban didn’t go far enough, that no one had been killed panhandling at a median, but 30 people a year died just from living on the streets, and no one seemed to care about that.

“He literally, over the course of that scene, felt and understood every person’s argument,” says Wolfe.

Asked how theater companies in other cities might use a similar approach to take on urban issues, D’Andrea points to the core theatricality of it all. Council members in their elegant chambers perform before the public. In their own way, journalists do too. He even sees drama in the tension between the drivers and the signers themselves.

“On the street corners, to make a crude analogy, there is a performer on a street corner begging, and the audience is the cars going by, and there’s a live interaction between these parties,” says D’Andrea. In order to achieve the same discomfiting effect in theater, he advises performers look for an issue “with a dramatic conflict at its heart.”

“It’s a tug-of-war. People with opposite wants. Two people want completely different things, and they’re pulling on the rope to win.” Sounds like most city council meetings I’ve been to.