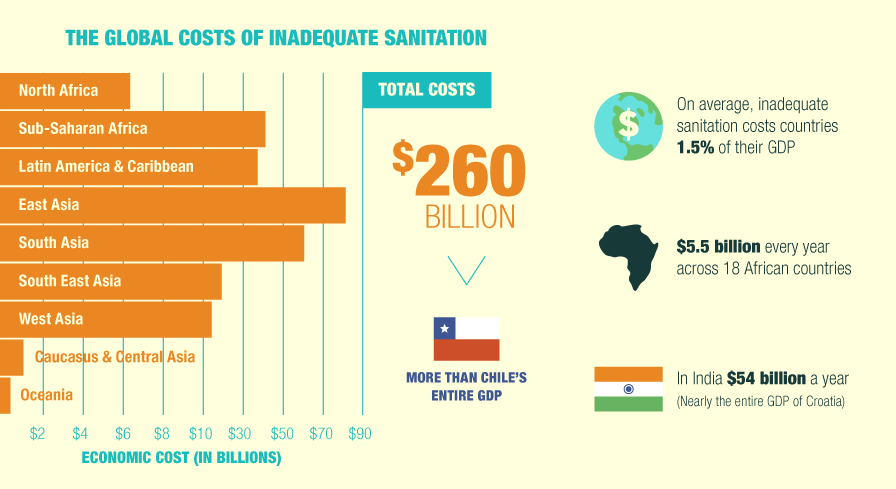 The lack of proper sanitation infrastructure across the globe takes a huge toll on human health and the environment. It also costs a tremendous amount of money.

Figures released last month by the World Bank’s Water and Sanitation Program (WSP) reveal just how steep the price tag is for parts of the world where people don’t have access to adequate toilet facilities. WSP puts the annual global cost at $260 billion, a figure that includes what nations pay in premature death, health care expenses and lost productivity due to waterborne illnesses.

There’s another figure, too, that you might not think of if you haven’t lived in a place without toilets. A typical person who must defecate in the open spends a total of about 2.5 days each year looking for a place to do their business in private.

In 2010, the United Nations acknowledged what might seem self-evident, but still needed to be made clear: Clean drinking water and access to a place to urinate and defecate in private, with the waste safely disposed of, are a basic human right.

Why is it so important to put a price tag on human suffering? WSP’s researchers recognize that nothing gets the attention of a government like money. By quantifying the expense of poor sanitation in stark monetary terms, they hope to persuade planners and bureaucrats that it is worth investing in a solution.

“Economics brings greater focus to both the cost and benefit side of the sanitation equation,” Guy Hutton, an economist working on WSP’s Economics of Sanitation Initiative, says in an online presentation.

WSP’s research shows that spending on sanitation results in a huge return on investment, yielding $5 for every $1 spent. That’s an enticing figure, and it doesn’t even account for benefits to tourism, water quality and land values.

But the magnitude of the problem remains staggering, and there is no one-size-fits-all solution. Rural and urban areas, for instance, require different types of systems. As city edges become more densely settled, old solutions such as pit latrines become overburdened and unworkable, endangering the underground water supplies that these same communities depend on. Yet the financial and water resources to build the type of sewage systems common in developed countries often don’t exist.

One solution that WSP and others have explored is a simplified system known as a “condominial sewer.” Pioneered in South American countries like Brazil and Peru, these networks of pipes work at the neighborhood scale to enable the construction of toilets and the proper disposal of waste at a relatively low cost. Pilot programs, such as one in an informal settlement at the edge of Lusaka, Zambia, are exploring the possibility of implementing such systems where they are most needed — the rapidly growing urban settlements of sub-Saharan Africa and similar places around the world.

Clean water and a private, sanitary toilet may indeed be a human right. But WSP and other agencies trying to bring about global change are banking on the idea that framing the issue in terms of money, rather than rights, will spur governments to provide their citizens with the facilities they deserve.