The Visual Display of Fugitive Information – Next City

The Visual Display of Fugitive Information 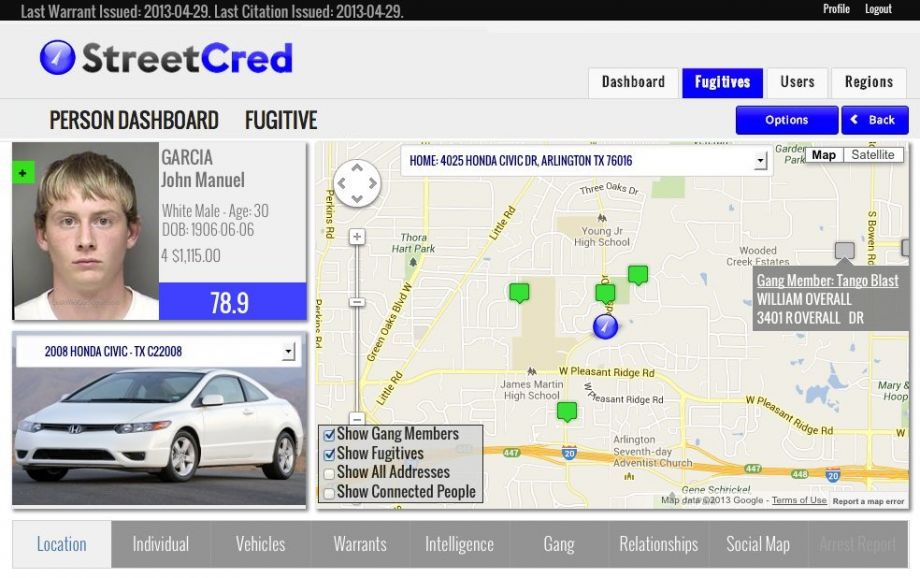 Nick Selby didn’t go to the police academy until age 45, when the tech-savvy information security expert wanted to better understand the mechanics of catching fugitives out in the field. Dave Henderson, his partner in what would become a mobile tool for equipping officers with insight into warrant lists, had been a cop for more than 15 years. “When he got the job,” Selby said in a phone interview, ” the advice was, ‘go get ‘em’.” Nothing much has changed in the intervening years.

Thus was born StreetCred, a Dallas-based software start-up that Selby presented on at last week’s Code for America Summit in San Francisco:

Your high-profile serial killers aren’t StreetCred’s focus. “If they’re on CNN,” Selby said, “they’re going to jail.” Instead, it targets everyone else who ends up on cities’ bloated warrant logs for both felonies and misdemeanors. New York City, Selby pointed out, has 1.8 million outstanding warrants. Chicago has 120,000 and Los Angeles, 70,000. But police have limited resources. “We make those decisions a little easier,” Selby said, “by providing context and situational awareness.”

StreetCred holds close details on the “digital artifacts” that go into its formula. But on the phone, Selby was willing to offer a bit of insight. “It’s basically a bunch of nested if-then-else statements,” he said, using some computer programming language. The first “if” is whether the fugitive is even walking the streets.

First, the system eliminates people who are dead or in jail. Then StreetCred will pare down the geography to an area where local police are likely to take action — say, a radius of about 75 miles. At that stage, Selby said, “rather than looking for good fugitives, we’re looking to throw away bad ones.” This gives officers a pool of people whom they can take to a judge and say, per Selby, “it costs us more to maintain these records than it’s worth to get ‘em.” The winnowing process, he said, eliminates about 10 percent of fugitives from the roster.

Next, StreetCred turns to examining more than 100 different other factors, using a mix of public records, proprietary data and what’s available on the Internet. It will scoop up information on DMV records, construction permits, warrants in other jurisdictions and more. (But not, apparently, race or gender.) “We throw away the uninteresting data,” Selby said, “and what’s left, we ask a lot of questions about.” The inquiry depends on the magnitude of the crime. “I wouldn’t go after Twitter geotagging unless it’s a serious offense,” Selby explained, “but if I’m looking for a murderer, I’m going to look in every possible place that I can look.”

The mission is to prioritize which criminals to go after. The prize fugitive? Someone with no history of violence and a known address he or she is likely to visit at known times. Offenders with a history of aggression get a “Violent” sash over their photo. That doesn’t mean an officer wouldn’t pursue the fugitive — just that an officer may want to call for backup before paying the fugitive a visit.

With StreetCred, officers in the field get a mobile, visual presentation of available data in a way that equips them to make smart decisions, again and again. Selby pointed to the recent case in Florida where police managed to track down two escaped felons by following who had deposited money in their canteen accounts.

“It’s a human process, and we’re automating it,” he said. “It’s what everyone would do if they had the time and the people.”

Exactly what sort of information matters isn’t always obvious to those of us with less experience chasing fugitives. “If I find out you work for Grumman, great,” Selby said. Why? Well, then you likely have security clearance. “And people who have security clearance don’t want to give up their security clearance because it means giving up their jobs” — especially when it’s over, say, $5,000 in unpaid parking tickets. “So I can get them on the phone and negotiate a surrender.”

Also especially useful, Selby said, is knowing where a fugitive’s grandmother lives. There’s a good chance he or she will run there. Even fugitives, it seems, are likely to listen to their grandmothers.