The Vanishing Boat People of Phnom Penh – Next City 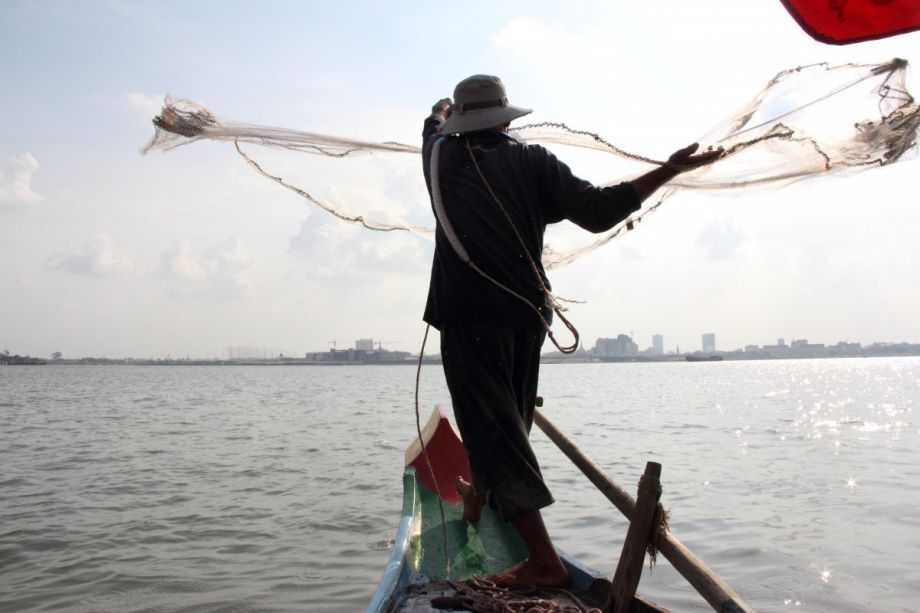 He eases the sampan into position with an oar tethered to its prow. Phnom Penh’s modest skyline stretches across the opposite bank of the river, with half-finished apartments, office towers and hotels dwarfing the gilded spires of the city’s palace and Buddhist temples. Nearby, other fishing boats ply the murky waters with their lines and cast nets while, downstream, numerous rusty barges dredge sand from the river’s bottom.

Mat Tam, 55, drapes his weighted nylon net around him, then pirouettes and casts it into the river. He lets the net settle before gingerly hauling it aboard. The catch: a handful of small baitfish, a lone catfish, several rocks, a chicken skull and a few plastic bags. The fish go into a livewell that has been cut into the wooden boat’s hull. The refuse goes back into the river. Fishing from 4 a.m. to 3 p.m., Mat Tam says he’s able to net four or five kilograms per day. In the afternoons, he moors his boat near the city so his wife, Sai Mat, can take their catch to the market where she can earn about $1.50 per kilo for it.

“I like life on the water,” says the soft-spoken 52-year-old woman. “But it used to be much easier. Ten years ago, we could catch 10 kilograms a day – a lot more than we could ever get now.”

While Mat Tam fishes, Sai Mat watches two rambunctious grandchildren playing in the shade of the boat’s covered midsection. Aged four and five, the girls, who are first cousins, have been living with their grandparents since they were infants. Their parents work in Vietnamese garment factories and couldn’t afford to raise them. 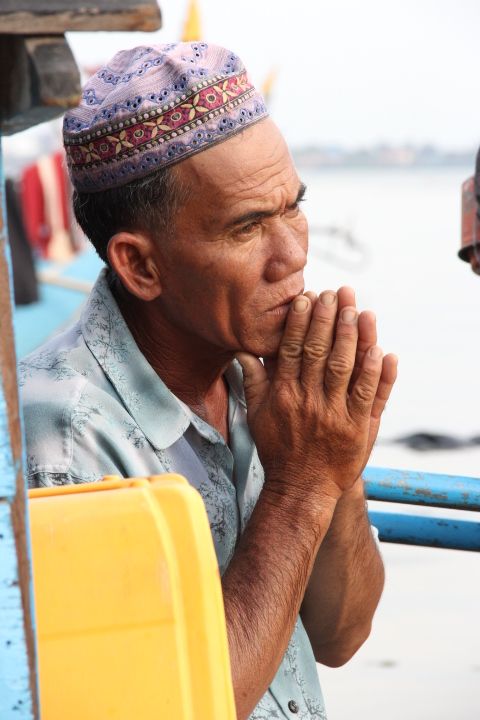 The family practices Sunni Islam, the religion of many of the country’s most visible boat people.

“I’ve lived on the water for 35 years,” says Mat Tam, a father of six. “When I got married, I had no money for a house, so I bought a boat. This is all I could do to survive.”

Mat Tam’s family is one of a hundred or so who live on boats in and around the confluence of Phnom Penh’s Mekong and Tonle Sap rivers. Most families are Cham – an Austronesian ethnic group descended from a mediaeval Hindu kingdom that once thrived along the south-central coast of Vietnam. When the mighty kingdom of Champa began unravelling in the 15th century, its people scattered across the region. Sunni Islam eventually became the dominant religion of Cambodia’s Cham community, who, numbering more than 200,000, are one of the country’s largest ethnic groups. While most Cambodian Cham live ashore in ethic villages centered around mosques, they are also perhaps the most visible of the country’s boat people.

When the ultra-Maoist Khmer Rouge seized control of Cambodia in 1975, the country’s Chams became a target of the new regime. Their language was banned, mosques were converted into pig sties, they were forced to eat pork and prayer became punishable by death. Cham communities that didn’t assimilate were annihilated. An estimated 100,000 Chams – nearly half their population – lost their lives before the Vietnamese Army ousted the Khmer Rouge in 1979. 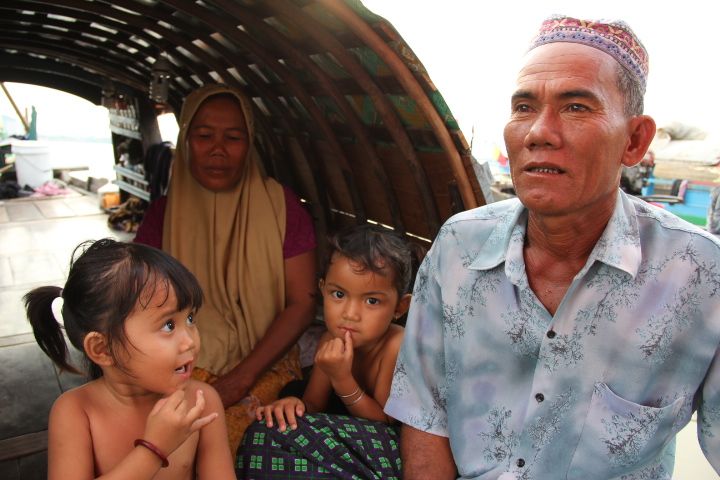 Mat Tam and Sai Mat with their grandchildren.

Mat Tam weathered the genocide. When the Khmer Rouge came to power, he sailed south into Vietnam where he joined the anti-Khmer Rouge resistance. When the country was liberated, he followed the river back to Cambodia. For the past twenty years, he and his wife have plied the muddy waters off Phnom Penh as the city mushroomed from a dusty war-scarred capital to a bustling metropolis. They fish day in and day out, their lives like a timeless island amidst the strong currents of change.

“I really want to move ashore, but I’ll never have the money to,” he says.

To their nomadic community, the rivers are used for everything: water, sustenance, bathing, refuse. Their small, brightly painted boats are also worlds unto themselves, serving as workplaces, bedrooms, kitchens, dining rooms, lounges and places of worship. All of the families’ possessions are kept nestled under wooden floorboards in bins and bags. Some families even rear chickens on their vessels. Those who can afford propellers mount them to fume-spewing tractor engines. At night, many gather around fluorescent light bulbs affixed to car batteries on the decks of their boats.

But Mat Tam’s way of life is becoming increasingly unfeasible. As Phnom Penh develops, city officials have made it clear that they consider the boats an eyesore. They are no longer allowed to moor along Sisowath Quay, Phnom Penh’s main waterfront drag, nor are they allowed to fish in front of the city’s royal palace. For years, a large group of Chams moored their boats directly across from Sisowath Quay on the Chroy Changvar peninsula. They were scattered and relocated in 2012 to a more inconspicuous location as developers began building a massive hotel at the site. 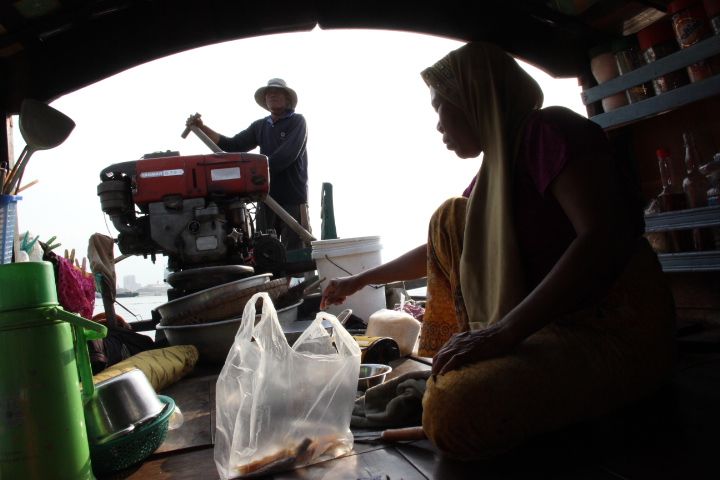 While Mat Tam fishes, his wife watches their two grandchildren under the boat’s canopy.

At night, Mat Tam and his family moor their boat on the east bank of the Mekong River. They and their floating Cham, Cambodian and Vietnamese neighbors each pay local authorities roughly $2.50 a month for the privilege to do so. It’s a peaceful place at night, with the busy city’s lights shimmering across the expanse of water, but as riverfront properties become more desirable, their tenure on this trash-strewn strip of mud and reeds becomes increasingly uncertain. If forced to leave, they’d be unable to access the capital’s markets.

More alarming for the family is their ever dwindling catch. According to Mat Tam and his wife, they have been witnessing a steady decline in both the size and quantity of fish over the past three years, making it increasingly difficult for them to make ends meet. They attribute declining catches to illegal electrofishing and a series of nets that divide the Tonle Sap lake – Southeast Asia’s largest and a spawning ground for numerous fish species – from the river that both feeds and drains it. The effects of rampant sand dredging (an industry fueled by domestic and international land-reclamation projects) has yet to be fully studied. A series of proposed and controversial dams along the Mekong’s mainstream in Laos are also expected to significantly impact fish populations. One of these dams, which will be built less than two kilometers north of the Lao-Cambodian border, may prove to be particularly devastating to Cambodia’s fisheries.

According to Dr. Eric Baran, a senior scientist at the Cambodian office of research non-profit WorldFish, the problems fishermen like Mat Tam are experiencing are multi-faceted.

“[F]ishermen certainly catch less per person, but it is difficult to disentangle that from the increase in number of fishermen,” said Dr. Baran via email. He adds that while the average fish size is declining, that may not necessarily be a sign of overall decline if more abundant smaller fish are taking their place.

To Mat Tam, however, the decline is real. With his whole life invested in his boat, he says that only his faith will keep him afloat. As the sun begins to lean over the city, he bathes in the river. Donning a checkered sarong, a clean shirt and a brightly colored taqiyah, he then lays out a mat on the vessel’s stern and prays towards distant Mecca.

“I’ve dedicated my life to Allah,” he says afterward, nursing a cigarette. “It’s difficult way of life, but it’s an honest one, so I know it will survive from generation to generation.”