The Urbanist Stories That Made Headlines This Year – Next City

The Urbanist Stories That Made Headlines This Year 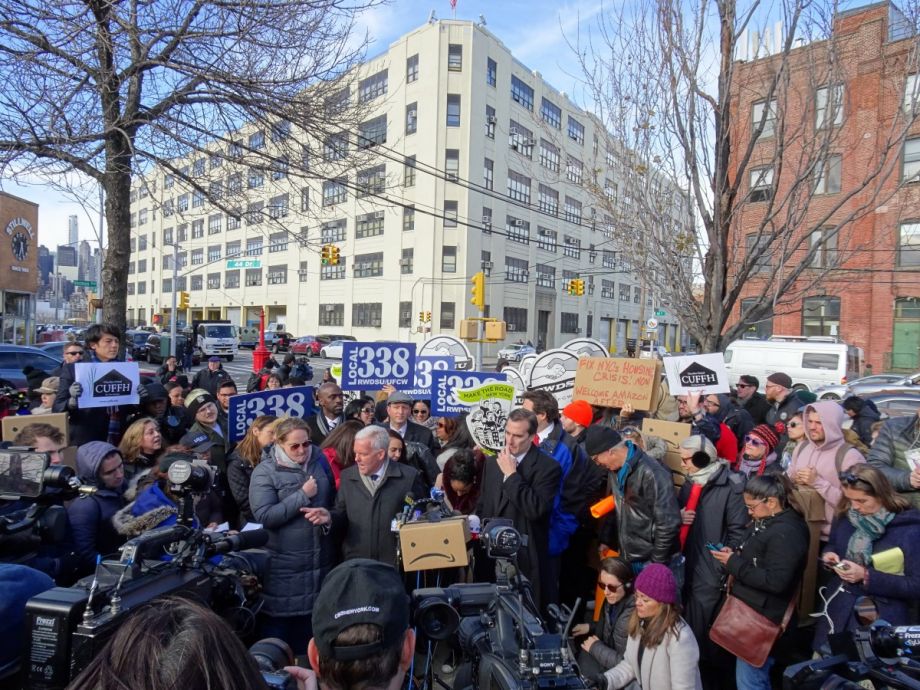 New Yorkers surround and question local elected officials during a rally held in the days following Amazon's announcement of HQ2 split into two locations, including a site in the Long Island City neighborhood of New York City's borough of Queens. (Photo by Oscar Perry Abello)

2018 was a big year, both good and bad, for those of us who follow news about cities. From HQ2 to self-driving cars, these are the stories that grabbed headlines this year.

Amazon announced it was seeking proposals from cities wanting to host its second headquarters way back in September of 2017, and it feels like not a week went by in 2018 without more speculation or commentary on which city might be chosen for this dubious honor. By mid-November, when Amazon announced that HQ2 would actually be in two locations — New York and Arlington/Alexandria — many of us were feeling serious Amazon fatigue. But the coverage isn’t over: As numerous “losing” cities made their bids public, there’s a lot to dig into around the state of corporate incentives. Some of the early, tantalizing details: D.C. offered to create an “Amazon University” to train potential hires, Atlanta offered Amazon a private lounge at the airport and an Amazon-dedicated car on MARTA, and both Boston and Chicago offered help speeding through city red tape with concierge services at City Hall.

Uber and Lyft prep to go public, and more

The two largest transportation network companies both filed paperwork for initial public offerings in 2019, TechCrunch reports. Uber’s IPO in particular will “easily be one of the most highly anticipated IPOs of the decade,” the site said.

Both Uber and Lyft have been expanding beyond their original business models of connecting riders with drivers this year. Lyft purchased Motivate, the bikeshare company that operates Citi Bike, Capital Bikeshare, and many more systems, and launched a dockless scooter service in certain markets. Uber purchased JUMP Bicycles, owns a stake in Lime, and is reportedly considering outright purchasing Lime or Bird, two of the largest dockless scooter companies in the U.S. (“Bird is not for sale,” CEO Travis VanderZanden, both an Uber and Lyft alumnus, has said in interviews.)

With “scooter-lash” at an all-time high, it remains to be seen whether Uber and Lyft’s move into the scooter market will be a net positive or negative for these companies.

After a two-year investigation, federal prosecutors released an 80-page civil complaint against the New York City Housing Authority, known as NYCHA, accusing the authority of endangering the health and safety of its tenants through mismanagement and coverups, the New York Times reported. NYCHA offered to invest $2 billion in its public housing and appoint a federal monitor to supervise the agency, but a judge rejected that settlement, saying it didn’t have strong enough enforcement mechanisms, implying the federal government take over NYCHA instead. If NYCHA and the U.S. attorney’s office don’t reach a deal by Jan. 31, the agency will likely be placed into receivership. Supporters of receivership, the NYT reports, say that in general housing authorities in receivership “showed marked improvements,” while detractors say that receiverships can be worse. In Cairo, Illinois, public housing residents were evicted after HUD took over.

The Boring Company opens for business…sort of

He actually did it: After tweeting that LA traffic was “driving [him] nuts” and threatening to build a tunnel to avoid the crush, Elon Musk’s Boring Company opened a 1.14-mile test/prototype in Hawthorne, California. Journalists rode along the test tunnel at about 35 miles per hour, CNN reported, a far cry from the 150 miles per hour that Musk has promised in the future, but faster than Los Angeles traffic runs, NBC Chicago said.

Musk has also claimed that the tunnels can be built for far cheaper than a traditional excavation project, by building more powerful boring machines and compressing the excavated material into bricks and selling them (Musk hoped the bricks could be used to build housing in Los Angeles, but this plan has turned out to be impractical for a few reasons). He said the 1.14-mile prototype tunnel cost about $10 million to build, in comparison to the typical $1 million per mile.

While many tech journalists, as well as Musk himself of course, believe that the tunnel network could be a solution to Los Angeles’s famed traffic problems, most urbanists unsurprisingly agree that actually building the thing would be insanely unhelpful.

Next up for the company, possibly: Building a tunnel connecting downtown Chicago to O’Hare International.

Because of course urbanists need their own meme group. So now the New Urbanist Memes for Transit Oriented Teens (NUMTOTs) are, like, a thing.

The existence of a Facebook group with more than 130,000 members who trade images superimposing Gov. Andrew Cuomo’s on the “daily struggle” guy might be a sign that discussions about public transit, density, and infrastructure are becoming more mainstream. Or it may be proof that on the internet, there’s a place for every subculture (which nest fractally, as evidenced by the fact that the NUMOTOTs already have more than 50 spinoff groups). Cofounder Juliet Eldred is in the former camp, telling the New York Times that “Transportation and urban planning is thought of as a niche or wonky kind of thing, when it really does affect everybody. This group has been sort of good at lowering the bar to entry.”

Whatever it is, it doesn’t seem to be going away any time soon.