The Urbanist Case for Rowdy-Ass Bars – Next City

The Urbanist Case for Rowdy-Ass Bars 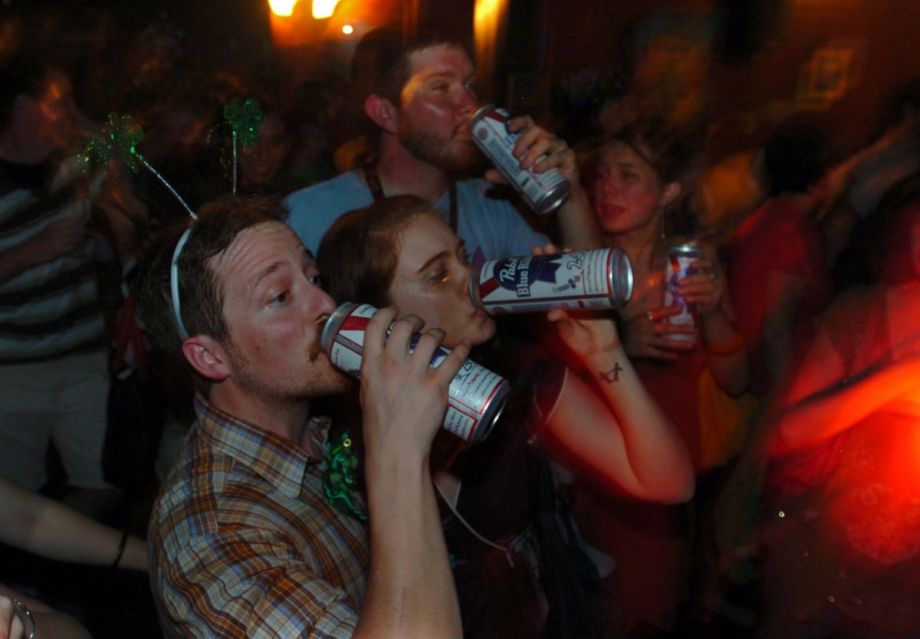 This weekend most bars could be called nuisance bars, as they can hardly fail to be when engulfed by a small army of dubiously Irish revelers. St. Patrick’s Day, as practiced by Americans, tends to bring out the worst in a drinking establishment.

It’s the sheer number of boozeheads that make the holiday such a menace. In small doses this weekend’s merrymakers would appear no different than any other drunk people: Boisterous, loud, offensive, sometimes aggressive and up way later than you. Of course, there is a certain segment of the population who can’t stand any amount of that at any time of year, especially if a bar sits right next door to — or underneath — their apartment.

There is another school of thought on this matter, however. Let’s call it the Jane Jacobs Theory of Drinking: It’s good to have eyes on the street, even if they are seeing double, and especially because many non-drinking businesses are closed after 9pm or 10pm on weeknights.

Jacobs famously lived at 555 Hudson Street in Greenwich Village and wrote of the “sidewalk ballet” that made her block a joy to live on. One of the businesses she names as a neighbor in good standing is the White Horse Tavern, where according to literary legend Dylan Thomas drank himself to death (“I have had 18 straight whiskies, I think that’s the record”). In The Death and Life of Great American Cities, Jacobs speaks highly of the influence of bars on her block:

Strangers become an enormous asset on the street on which l live… particularly at night when safety assets are most needed. We are fortunate enough, on the street, to be gifted not only with a locally supported bar and another around the corner, but also with a famous bar that draws continuous troops of strangers from adjoining neighborhoods and even from out of town… this continues until the early hours of the morning… The comings and goings from this bar do much to keep our street reasonably populated until three in the morning, and it is a street always safe to come home to.

She may have felt differently if the shop below her apartment sold shots and not lollipops, but from a utilitarian perspective the point is good. There used to be a bar across the street from my apartment that stayed open until 2am on most nights. The bartenders were friendly and knew the regulars. If you felt uncomfortable outside, you could always duck in for a quick one. After it burned down, that side of the street has no businesses open past midnight and the walk home definitely feels less safe.

The bar was probably hell for whoever lived above it. A lot of people did get quite drunk, and loud, and there were probably fights (although I never witnessed one). But looked at in such a light, couldn’t most drinking establishments be considered a nuisance?

“There is no general definition. Every case, every establishment is different,” says Beth Grossman, chief of the Philadelphia District Attorney’s Public Nuisance Task Force. “A public nuisance is one of the hardest things to define. We know it when we see it, but it’s also how the community observes it. Especially in a large metropolitan city.”

Grossman and her team focus on businesses that sell drugs and nuisance bars. If it’s the latter, they first establish whether the bar has a license. If not, case and doors closed. If yes, then the process is a little more forgiving. And that’s a good thing if the tavern in question isn’t the frequent site of violence. When it comes to quality of life issues, Grossman will set up meetings with bar owners to explain community complaints and make suggestions about neighborly improvements.

“In Center City and Old City we’ll get a lot of complaints about noise, because people live above bars and noise travels upward,” Grossman says. “Most owners tend to be responsive because a liquor license is a valuable asset and there is only a set number of them. They are worth about $75,000 and no one wants to lose that.”

There are, naturally, some unrepentantly bad actors. Repeated shootouts, for example, would presumably be a good sign that the given establishment is an unambiguous problem. Grossman doesn’t highlight any particular parts of the city where barroom homicides and violence are concentrated, although it probably looks a lot like the rest of the bloodshed in Philadelphia. (This map, by Gun Crisis, shows the locations of 89 shootings as of last November.)

Bars, though, do not tend to be the worst offenders in high-crime neighborhoods, as Dr. Charles Branas of the University of Pennsylvania and his colleagues found in a 2010 study. Their research made a distinction between on-premise and off-premise drinking establishments (think bars vs. liquor stores) in Philadelphia. They found the risk of getting shot was highest for heavy drinkers in neighborhoods with concentrations of takeout booze businesses, although there were also risks for those who just happened to be in the vicinity.

“Unlike off-premise alcohol outlets, on-premise outlets, such as bars and taverns, were by comparison highly monitored, relatively safe havens, even in neighborhoods with high levels of gun violence,” the study notes. Takeout businesses tended to sell products with higher alcohol contents for cheaper, and offered no sense of authority or order for their surroundings. Patrons tend to get really hammered, therefore making it easier for armed robbers to prey on them or for arguments to get badly out of hand.

Branas and his colleagues argue that off-premise booze purveyors could be trained to cut off visibly intoxicated persons and report arguments or fights immediately (neither suggestion that is likely to greatly mitigate the problem). Bars in violent areas can better control what goes on within their closed environments: I’ve been to neighborhood bars in Kensington, for instance, where they pat everyone down for weapons before allowing admittance.

For real problem bars and off-premise establishments, there aren’t easy answers. As the Daily News wrote a few years back, Grossman and other authorities have a hard time closing down bars where violence breaks out. Grossman says it could take up to two years and requires a lot of work from both the community and police, because the case must be taken through an already-overburdened civil court process. She estimates that the task force has shut down between 10 and 12 bars since she took office in 2008, but she has no authority over off-premise establishments unless they are dealing drugs. (Of course, Philly is hardly the only city with these problems. See: Ongoing efforts to keep the noise down on the equally loved and reviled Bourbon Street in New Orleans.)

For complaints, the task force has a hotline. For those who live around a merely noisy bar, maybe invest in some earplugs and consider what the block might look like at midnight without it. For this weekend, though, maybe everyone just shouldn’t leave the house.