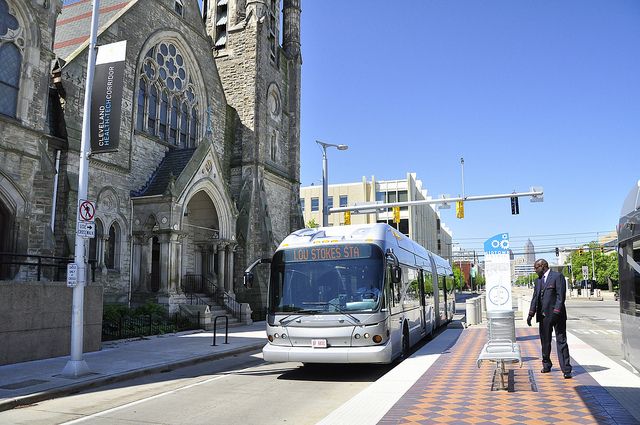 The common wisdom in U.S. transit circles on trains versus buses is that while buses can often move people around at lower costs, trains are what’s really needed for true transit-oriented development. Many cities take this idea to an extreme and end up building mixed-traffic streetcars, which add the element of rail without any speed (or, in some cases, frequency).

But the Institute for Transportation and Development Policy today released a study with a somewhat controversial conclusion. “The type of mass transit providing the best bang for the buck is bus rapid transit,” it reads. That is, bus service that acts like rail is better than rail.

The report is one of the more comprehensive evaluations of various surface transit modes and their development potential, but that isn’t saying much. While it presents an interesting snapshot of a few projects, there are far too many variables for a sample size of 21 — the number of projects ITDP analyzed — to yield many conclusions.

Basic variables include technology (bus or rail), quality of service (with things like dedicated lanes and pre-boarding fare payment differentiating enhanced bus service from bus rapid transit and streetcars from light rail), cost, and development yield. There are also land use regimes that shape how much development is allowed, plus basic factors like when a system was built. For instance, the study compares projects barely older than the recession to lines that have been running for 30 years.

Annie Weinstock, one of the study’s co-authors, was upfront about its limitations. “There are a lot of variables and it’s a relatively small sample size,” she said. “There aren’t enough systems to make for a statistically significant dataset.”

Buried in the ITDP report, though, is one conclusion that may prove stronger than the headline argument about how BRT trumps rail. It’s that government action on land use is necessary for a project to spur development.

The adage that “a good land use policy is the best transportation policy” oversimplifies things, but it’s clear that if the goal is to grow cities with transit, you have to actually allow the areas around new transit projects to grow.

Which “government interventions,” as ITDP puts it, are most effective is a question that goes unanswered. The report lumps bread-and-butter deregulatory issues, like rezoning for denser development and reducing parking requirements, with more interventionist things like economic development corporations, eminent domain and comprehensive citywide plans.

The most successful project, which ITDP holds up as the model, is Cleveland’s Health Line. The line has catalyzed $5.8 billion worth of development since opening in 2008, apparently a product of high-quality implementation — buses come nearly every two minutes, and ITDP has ranked it has the best BRT system in the country — along with relatively robust rezoning and lots of institutional building along the line.

The authors don’t make the connection, but if buses are in fact more effective than rail at catalyzing development in the U.S. (and this is never proven), that could be due to the country’s third world-like transit cost structure.

In the developing world, labor is cheap and capital is expensive. Buses are more labor-intensive than trains, so it makes sense that they would be cheaper. Indeed, the most advanced BRT systems were built in developing countries in South America and East Asia. But in the developed world, where labor is also expensive, the calculus shifts toward rail.

While European countries that excel at building transit, for example, have started building BRT systems, they generally continue to stick with rail, and the wealthiest East Asian countries are heavily dependent on rail. (Coincidentally, ITDP was first established as a transit advocacy group for the developing world, only recently branching into the United States. It does not study Western Europe or developed Asian countries.)

But the U.S. is no ordinary developed country when it comes to transit costs. While labor costs here are high, as with every other developed country, capital costs — the cost of building transit systems — are much higher than average.

Phoenix’s light rail line cost $70 million per mile, whereas lines in France and Spain can cost half that. And even Phoenix seems like a bargain compared to Houston, where the Red Line light rail extension, an otherwise well-planned project that will open next year, clocks in at $145 million per mile. (Houston’s original light rail line, one of the busiest in the country, did not make ITDP’s study.)

In the end, ITDP poses an interesting question and takes a stab at answering it quantitatively, but we still have very little insight into the development potential of rail and buses. “Advocates will advocate, that is in their nature,” David Levinson, a professor at the University of Minneapolis, wrote in reference to streetcar boosters. The same seems to apply to those who promote bus rapid transit.