‘The Sunset Experience’ Adds Walkability to the Sunset Strip – Next City

‘The Sunset Experience’ Adds Walkability to the Sunset Strip 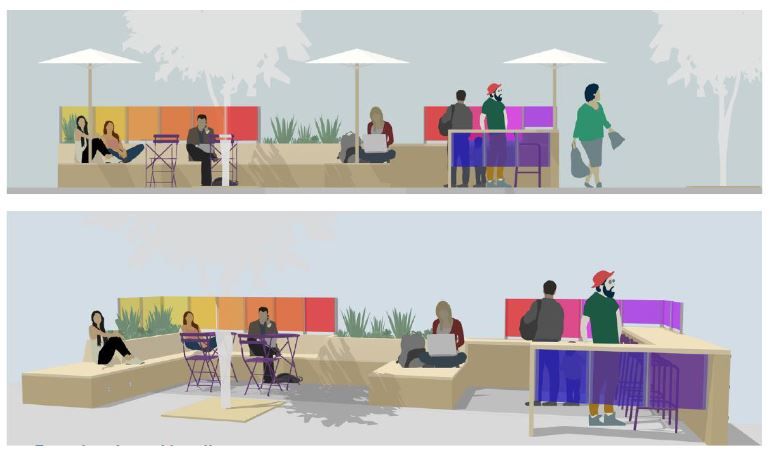 A rendering of the Sunset Boulevard parklet that will front Book Soup, an independent bookseller. (Credit: City of West Hollywood)

For four blocks along Sunset Boulevard, the city will install seating, colorful light poles and painted sidewalk extensions to make crossing the street easier. It’s also building a parklet at 8818 Sunset Boulevard in front of indie bookstore Book Soup, where passersby can sit, enjoy shade, and pick up or drop off a book at a Little Free Library. Wayfinding posters will direct pedestrians toward food, drink and entertainment, as well as providing history of the area.

“The pop-ups will create spaces to welcome pedestrians, invite walking, encourage interaction and draw attention to Sunset as an exciting place for people, not just cars,” the city said in a statement.

West Hollywood is the most walkable city in California, according to Walkscore, but still can be an unsafe place for pedestrians. In 2013, there was an average of 4.4 vehicle collisions with pedestrians crossing the street, WeHoByTheNumbers calculated using city data. New signs and reflective markers installed in 2015 lowered collision numbers to around 2.5 per month. A PSA video released around the same time went viral for reminding pedestrians to get off their phones; the video featured drag queen William Belli dressed as Alice in Wonderland, dancing to a Taylor Swift parody… because West Hollywood.

Though the city attempts to improve conditions for pedestrians, it’s not as if car traffic zips along. During rush hour, driving Santa Monica Boulevard in West Hollywood is usually no slower or faster than rush hour in Beverly Hills or Hollywood, reports WeHoByTheNumbers. But car traffic slows to a crawl in West Hollywood outside of rush hour, slower than in neighboring cities. This fact has drivers pretty cheesed about the proposed pedestrian measures, at least judging from the comments on WeHoVille’s post about the project.

Planning firm Gehl Studio designed the interventions, which are being installed now for a December 4 unveiling event. At the event, pedestrians — and ticked-off drivers — will have a chance to share their opinions with the city planning team.

After the six-month pilot ends, the city said, they’ll use the results to recommend future permanent actions on Sunset. Or, simply suggest additional pop-ups.