The Study Group Bringing Bell Hooks to Prisons – Next City 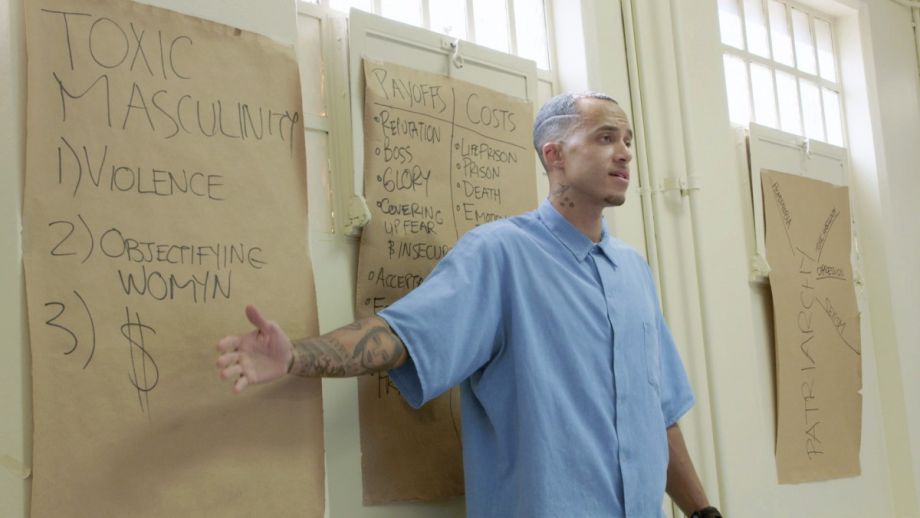 Richie 'Reseda' Edmond-Vargas was trained in intersectional feminist organizing before he was incarcerated at the age of 19. This week, he and his co-founder Charles Berry launch Success Stories as an official nonprofit.

In a bare, brightly lit classroom inside the Correctional Training Facility in Soledad, California, Richie ‘Reseda’ Edmond-Vargas taught one of his last lessons on patriarchy and toxic masculinity to a group of men who, like him, were incarcerated there. Several years after developing this curriculum, Edmond-Vargas was preparing to transfer to one last facility before ultimately returning to society.

On long sheets of brown paper he broke down tenets of toxic masculinity, asking men to consider the payoffs and costs of buying into values like violence, objectifying women and having money. Men threw out suggestions relating to the costs: bad relationships, loneliness, life in prison.

“We’re all pretty clear on the problem,” Edmond-Vargas says, “What’s the solution?” In response, a facilitator with the group, also incarcerated, stood up to read a passage from bell hooks’ book on toxic masculinity, “The Will to Change.”

This teaching moment was the result of years of work between Edmond-Vargas and Charles Berry inside the prison. The pair started developing curriculum in 2013 to educate other incarcerated men on how their lives have been affected by patriarchy and toxic masculinity. The full program, which launched February of 2014 under the name Success Stories, includes a variety of intersectional feminist texts with a focus on bell hooks.

Today, both Berry and Edmond-Vargas are out of prison. Edmond-Vargas, based in Los Angeles, launched Success Stories as an official nonprofit organization this week. The organization secured partial funding from the California Department of Corrections and Rehabilitation to introduce its curriculum into three new state prisons and just kicked off a fundraising campaign to support the expansion and work toward establishing a national presence.

Edmond-Vargas was trained in intersectional feminist organizing before he was incarcerated at the age of 19. After arriving at the Correctional Training Facility in 2013, he participated in a group looking at “what it meant to be a man” that he felt upheld patriarchal ideas.

He and Berry envisioned Success Stories as a group to tackle patriarchy head-on, defining its meaning and introducing concepts like rape culture and toxic masculinity. After the men learn the concepts, they discuss how their lives have been affected, and in many ways defined, by them. “Patriarchy is the biggest hindrance to our success,” Edmond-Vargas has said.

Edmond-Vargas and Berry recruited men through one-on-ones while also navigating what Edmond-Vargas calls “prison politics.” Violence and masculinity is often an important part of men’s identity in prison. A stigma is attached to men incarcerated for rape, according to Edmond-Vargas, meaning that men charged with other crimes can be unwilling to implicate themselves in enabling rape culture.

But ultimately, over a weekly course spanning 12 weeks, men — primarily between the ages of 18 and 35 — find space to talk about their feelings. After identifying harmful values of patriarchal masculinity, many men make conscious efforts to free themselves from it.

Success Stories was underway for three years with a number of trained facilitators when CNN got wind of the group, filming a documentary in the summer of 2017. “The Feminist on Cellblock Y” was released in April 2018.

Facilitators who previously participated in Success Stories continue to teach it inside the Correctional Training Facility. Outside prison, Edmond-Vargas seized opportunities to establish Success Stories as a nonprofit organization. He did so with support from his wife Taina Vargas-Edmond, who cofounded another nonprofit with him, Initiate Justice. Taina serves as Initiate Justice’s executive director, and helped inform Success Stories’ early curriculum.

Edmond-Vargas and Berry found research by the California Department of Corrections that said incentives offered through prison groups (like reductions in sentences) help reduce recidivism. There was no official policy, however, that offered incentives for participation. So Vargas-Edmond crafted a bill in which group participation counted toward sentence reductions.

Her proposal earned the attention of then-Governor Jerry Brown, and California’s Public Safety and Rehabilitation Act passed in 2016 with an amendment that tied group participation to reduced prison time.

Formerly incarcerated men, many of whom completed the curriculum, will be hired as Success Stories facilitators inside the three new prisons.

“The curriculum is brilliant and our model is that it is all developed and run by incarcerated folks, with trainings led by formerly incarcerated folks,” says Chantal Coudoux, an early volunteer with Success Stories who is now the organization’s executive director.

The long-term goal, she adds, is to deliver the program nationally. “The CNN documentary allowed folks to re-imagine programming that could happen across the country,” she says.

Success Stories now fields two or three calls a week from around the country to bring its curriculum to other prisons, schools and juvenile facilities. Edmond-Vargas has led patriarchy workshops in colleges, high school and middle school classrooms, nonprofits and a California fraternity. In the era of #MeToo, he has seen the work resonate far outside prison.

“It’s a big undertaking — patriarchy is the cornerstone of our culture,” he says. “But it’s solvable. Rape culture can be addressed. I don’t think young men in prison need to be having this conversation more or less than any other men. It just so happens we have access to, and have built capacity around, serving that population.”