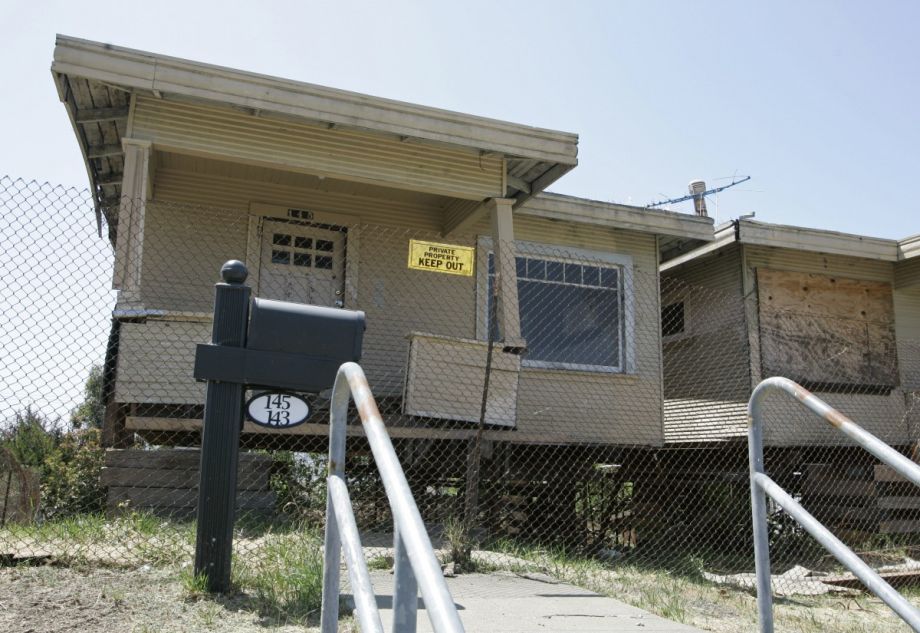 An empty home on blocks is shown on a hilltop in Vallejo, Calif. (AP Photo/Eric Risberg)

For Caroline Peattie to talk about the state of foreclosed homes in minority neighborhoods of Northern California, she has to get into the history of U.S. housing segregation.

Peattie, the executive director of Fair Housing Advocates of Northern California, draws a line from from early- to mid-twentieth century policies that enforced residential segregation by race and resulted in a persistent wealth divide, to the lead-up to the 2009 housing crash, in which minorities were targeted for subprime mortgages and then to the aftermath in which those minority neighborhoods were disproportionately affected by the foreclosure crisis.

In the decade since the crash, she’s seen housing inequality persist in a new way. Fair Housing Advocates of Northern California is one of 19 fair housing organizations, led by the Washington-based National Fair Housing Alliance, filing suit this summer against Bank of America alleging the bank intentionally failed to maintain foreclosed homes in minority neighborhoods, while it consistently maintained similar bank-owned homes in comparable white neighborhoods.

Fair housing organizations consider such disparate treatment of foreclosed homes to be reminiscent of redlining — the practice of denying bank loans and other forms of non-predatory lending to certain people or neighborhoods based on race. Both practices result in the gradual decay of housing stock in predominantly minority neighborhoods.

As a result, it’s not only property values and therefore wealth creation that suffer disproportionately in minority neighborhoods — physical and mental health suffer, too.

Fair Housing Advocates of Northern California’s efforts to document this modern-day redlining are a part of a much larger investigation, kicked off in the wake of the housing crisis in 2010 by the National Fair Housing Alliance.

“Owners of foreclosed homes are responsible for maintaining and marketing them,” says Morgan Williams, general counsel with the National Fair Housing Alliance. “In the course of the investigation, [the Alliance] identified the primary 39 factors used by industry players to evaluate the work [owners] were obligated to perform.”

Those guidelines dictated research done in white and non-white neighborhoods with high foreclosure rates. Between April 2012 and December 2013, NFHA staff and local housing organizations visited over 2,400 properties owned by a total of 11 banks, as well as the Federal Housing Administration and Fannie Mae, scattered across 29 metropolitan areas in 22 states.

Each property was evaluated with a checklist including factors like curb appeal, structure, paint and siding, gutters, water damage and utilities. Evaluators have taken over 35,000 photos documenting home exteriors. A 2014 report released by the National Fair Housing Alliance uncovered significant disparities between the white and non-white neighborhoods studied.

These findings have played out differently with the banks or other entities responsible for maintenance.

The National Fair Housing Alliance reached an agreement out of court with Wells Fargo, in which they invested $27 million in predominantly African American and Latinx communities, in partnership with fair housing groups across the country.

With other banks and entities, the alliance moved ahead with legal action after they found discriminatory practices continuing despite meetings, warnings and complaints with the Department of Housing and Urban Development.

In 2016, the alliance filed suit with 20 housing organizations against Fannie Mae.

Earlier this year, the Alliance and 19 civil rights groups filed a civil suit against Deutsche Bank, Ocwen Financial, and Altisource. The Bank of America suit was filed in Maryland this June, with two homeowners joining as co-plaintiffs because of the bank’s failure to maintain homes next to theirs.

In a statement to Next City, a Bank of America spokesperson says that “the allegations are without merit.” The statement continues, “We apply uniform practices to the management and marketing of vacant bank-owned properties across the U.S., regardless of their location.”

“The findings speak for themselves, and are documented in thousands of images,” Williams says on behalf of the alliance. “We would be hopeful that we can work with the bank to address these issues, but we’re prepared to push forward with enforcement.”

Previous settlement dollars have allowed some fair housing groups to deepen their work around the foreclosure crisis. When Fair Housing Advocates of Northern California hired an investigator in 2013 to look at how banks were marketing and maintaining their foreclosed properties, that work was partly funded from the foreclosure settlement secured for California in 2012 by then-attorney general Kamala Harris.

In Louisiana, the Greater New Orleans Fair Housing Action Center has worked with the National Fair Housing Alliance for the past decade analyzing foreclosures, and is also a co-plaintiff in the Bank of America suit. The Action Center also received money from the $27 million settlement agreement with Wells Fargo.

“We’re talking about some of the wealthiest institutions in the world, with more assets than many countries,” says Maxwell Ciardullo, the Action Center’s director of policy and communications. “And they’re making decisions that certain neighborhoods aren’t worth minor investments to do things like keep rats out of a vacant home, or prevent fire hazards.”

The Greater New Orleans Fair Housing Action Center set aside a $1.4 million fund from Wells Fargo to partner with churches and small nonprofits in Baton Rouge to continue its work around foreclosures, like offering foreclosure prevention counseling. Ciardullo, like Peattie, sees the work as a continuation of the long struggle for more equitable housing.