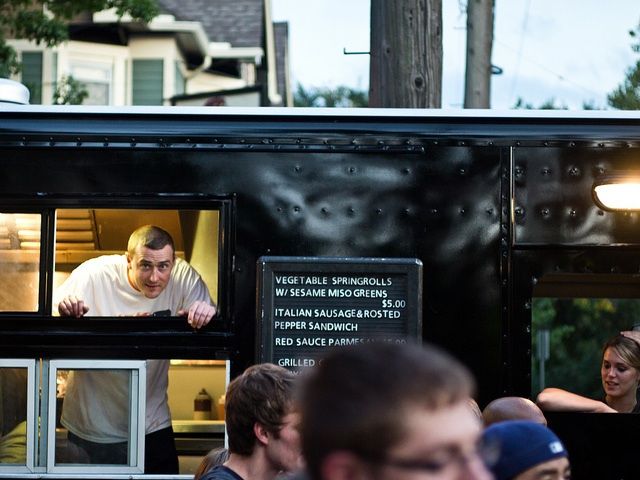 The food truck craze has fed the entrepreneurial hunger of some demographics more than others. Low-income native New Yorkers are among the groups left out of the boom. Photo credit: Edsel L on Flickr

New York City appears to be in a new golden age of entrepreneurship. In recent years, mid-career investment bankers, lawyers and media professionals have forged out on their own, opening everything from food trucks and restaurants to digital marketing agencies. Twenty-something college grads facing the worst job market in decades have turned to entrepreneurship in droves, establishing Internet start-ups, design firms and countless other new ventures. And immigrants from Washington Heights to Sheepshead Bay have continued to open food carts, franchises and other businesses at a rapid clip.

But amid the veritable start-up boom, some groups have fared better than others. Among those disproportionately left out of the new-economy bonanza are low-income, native-born New Yorkers, research released today by my organization, the Center for an Urban Future, shows.

Analyzing U.S. Census data, our researchers found that all 10 ZIP codes in the city with the lowest rates of self-employment have median incomes below $33,000, and in all but one the share of the native-born population exceeds the city average.

In contrast, neighborhoods with similarly low median incomes but where most residents are foreign born have higher-than-average rates of entrepreneurship. Meanwhile, native-born New Yorkers who live in affluent neighborhoods have among the highest rates of self-employment in the city.

In the Bronx, where 67 percent of the population is native-born and working-age residents tend to be poorer and less educated than in the rest of the city, only 17,000 of the borough’s 50,000 self-employed (34 percent) are native-born.

On Staten Island, 64 percent of self-employed individuals are native-born, but this is still not proportional to the share of the borough’s population that is American-born (79 percent).

In comparison, the 18 neighborhoods with the next highest self-employment rates actually had lower median annual incomes ($23,718, on average) but much higher levels of foreign-born residents (45.2 percent, on average) and an average self-employment rate of 8.8 percent. In all but two of these 18 neighborhoods, the share of the population that is foreign born exceeds the citywide average (36.8 percent). For instance, in Jackson Heights, where 63 percent of residents are foreign-born, the median annual income is $22,900, but the self-employment rate is 9.6 percent.

Other neighborhoods with median incomes below $25,000 but fairly high rates of self-employment include Elmhurst/Corona (9.3 percent), Sunset Park (9.1 percent) and Bensonhurst (9 percent).

Given how much capital it takes to start a business, and how much risk is involved, it is hardly surprising that many asset-poor New Yorkers have shied away from entrepreneurship. But it is eminently possible to expand the number of low-income entrepreneurs. In today’s economy, it is becoming a must. At a time when so many of the jobs that are being created come with low wages and limited opportunity for economic mobility, entrepreneurship should been seen as an alternative pathway out of poverty — at least for some.

The goal should not be to seed the next Google, but to increase the number of low-income New Yorkers who pursue entrepreneurship as a route to economic self-sufficiency. Indeed, a significant share of the immigrants who are starting businesses are doing it out of necessity, as a way to generate enough income to live on and raise a family.

The good news is that there is much to build on. While relatively few low-income minorities are starting formal businesses, there is no lack of entrepreneurial spirit or creativity among the native-born poor. Hundreds, if not thousands, of low-income residents in New York are earning income through informal “side hustles,” from cutting hair in their apartment to day care.

Harnessing this potential, however, may not be possible without first addressing the obstacles that prevent many low-income residents from even considering entrepreneurship in the first place. For instance, people living in poverty often have limited exposure to entrepreneurial role models and mentors, a problem since entrepreneurs often get the confidence to start a business after seeing family, friends and members of their community succeed with their own ventures. Low-income individuals are also more likely to have limited financial literacy skills, not to mention paltry savings, poor credit histories and limited access to friends and family who can help finance a new business. And some are deterred from starting a business because earning an even meager income from such a venture might cause them to lose government benefits, such as Medicaid, food stamps or housing subsidies.

While local officials in New York and many other cities have been rolling out new initiatives to support entrepreneurs, there has been little — if any — focus on encouraging more low-income people to consider entrepreneurship. Meanwhile, the workforce development centers that help jobless New Yorkers find work generally steer clear of recommending entrepreneurship, and the already small number of programs that teach entrepreneurship in the city’s public schools have been cut back in recent years.

A more strategic focus on promoting, teaching and supporting entrepreneurship in New York and other cities could have a big impact.