The Runners Helping Each Other Get Back on Track – Next City

The Runners Helping Each Other Get Back on Track 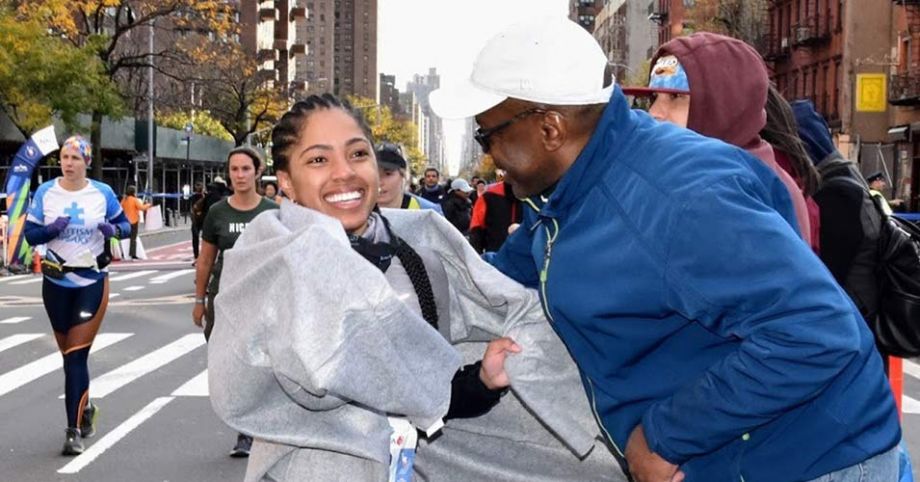 On a frigid February morning, a motley crew of runners huddles under a streetlight on the corner of 115th Street and Second Avenue in East Harlem. With arms outstretched across their neighbors’ backs, the crew circles up for their ritual “pump-up” chant — a pledge to run together and “run forever.” In reality, they run between two and four miles. Still, this is no ordinary running group, for many of its members have a complicated relationship with the streets they’re running on; just months earlier, they’d been living on them.

This same 5:30 a.m. routine happens every Monday, Wednesday, and Friday in five other New York neighborhoods and across twelve other U.S. cities via “Back on My Feet” – a nonprofit that facilitates early morning runs between “members” conquering homelessness and volunteers who want to join them. While BoMF’s main goal is to support the sustained employment and housing of those members, the organization views running as a tool to build resilience and help them get there. In rain, snow, heat, cold and shine, members transitioning out of homelessness commit to attend the early morning runs, and for those with a 90 percent attendance rate after 30 days, BoMF provides support for stable housing and employment. The logic? “If you can get up at 5:30am and run, you can get up for work,” one of the members reasons in a video about the organization.

In its twelve-plus years of operating, that logic has proven to be successful. Across its thirteen U.S city-based chapters, Back on My Feet has helped over 7,500 members transition into permanent jobs and homes. 83 percent of graduating members maintain employment. 70 percent maintain housing. The members’ physical health improves across many metrics — lower blood pressure, less dependence on nicotine, and a reduced BMI and obesity risk. And with countless morning runs, Saturday jogs, and marathons under their belts, the chapters have collectively logged almost 1 million miles.

Andrea Enfield, the organization’s development coordinator who started her journey as a volunteer, says there’s a secret sauce to that impact. “It’s hard to put a number behind the power of community, but I think that’s the foundation of everyone’s success,” she says. “I think everyone can attribute where they are today to a positive community in their life — family, friends, mentors, and many of our members say this is the first positive community they’ve been a part of in a very long time.”

Though Back on My Feet has long-been lauded as an organization helping those experiencing homelessness, less attention has been paid to the ways that same positive community also helps its 150,000 volunteers. Enfield, for instance, says her fellow Back on My Feet runners constituted her first group of friends in New York after moving across the country from Washington. Kari Lindemann, another volunteer turned employee, says her Baltimore-based running crew helped her overcome a death in her family. And for Ken Festa, a technical writer based in New York, the group got him through chemo and immunotherapy for stage 4 lymphoma.

“I thought I’d volunteered at Back on My Feet to help other people,” Festa says. “I didn’t realize the extent to which I was helping myself, the extent to which I was building a support network that I’d need some day,” Festa says. “My Back on My Feet friends were the first people that I turned to for advice and guidance. They’d overcome greater odds than I can even imagine, and their insights were invaluable.”

Jacq Gregg, an actress also based in New York City, has a similar take. “We had one guy join our circle who was in the system for most of his life and had only recently been released,” she says. “After running with him and talking with him, I was like, ‘What do I have to worry about?’ He’s spent most of his life incarcerated or in and out of rehab, and here I am, literally watching him go from never running a mile in his life to running full marathons.”

Gregg says one memory stood out in particular. “There was this woman — it was her first 5k and she had never run a race before, and she was squeezing my hand so tightly as we ran through that finish line together, “she remembers. “It just showed me what commitment really is — showing up and seeing it through to meet a goal.”

To be clear, Back on My Feet is no silver bullet. 7,000 lives is a drop in the bucket of a nation where 200,000 people are found regularly sleeping on the streets. And since Back on My Feet partners with other temporary living facilities — like The Bowery Mission or The Fortune Society — they deal exclusively with people who have other institutional support to better their situations. But for Daniel, a Back on My Feet member who had been struggling with heroin addiction, he credits his community of runners as the push.

“I grew up where nobody taught me to do the right thing,” Daniel says. “Coming here, I had no family, no job, and I couldn’t change myself because I was alone. But then I started running with the volunteers. I went to give this guy a handshake but he gave me a hug instead, and I wasn’t used to anything like that.”

Daniel, who now works a night job and is free of addiction, says he’s forever grateful for the community that helped him get back on track, and still runs with them regularly. “The volunteers showed up for me every morning with a smile on their face and I showed up for them,” he says. “I was able to share things with them — I inspire them and they inspire me.”

With homelessness in the United States on the rise, Back on My Feet plans to expand to 30 cities by 2023. Meanwhile, its approach has already taken hold globally. The similarly-named On my Feet has chapters in Australia and South Africa use running groups to empower those at-risk of or who are experiencing homelessness. The Running Charity in London connects youth experiencing homelessness with mentor programs and running regimens.

Through both Back on My Feet and other global initiatives, Enfield says focusing on the community’s assets is key to not only encouraging their members’ success, but also in breaking stereotypes of homelessness at large. “They’re runners, they’re teammates, they’re holding one another accountable to a commitment they made — there’s no defining thing when everyone’s tired at 5:30 a.m.”

On this front, the United States appears to have made progress. According to a 2016 study published in the American Journal of Community Psychology, Americans are more likely today than they were in the 1990s to attribute homelessness to external factors like the economy, rather than internal factors like laziness. But the volunteers say that running with Back on my Feet has given them extra perspective.

“We’re all one step away from making a bad decision. I could be on the subway and somebody could say something or do something, and next thing you know, I’m being arrested for whatever,” volunteer Jacq Gregg explains. “It’s just a matter of chance — and on any given day, it might have been the other way around.”

Beyond recognizing the crapshoot, other volunteers say it’s made them re-evaluate their own biases. “Early on, I was talking to one of the members and I used the word ‘ex-con.’ She gently corrected me, explaining that words like that are labels that you can never shake,” Festa explains. “Someone might have had some involvement with the justice system, but that does not define who they are. As [activist] Bryan Stevenson would put it, no one should be defined by the worst day of their lives, and I certainly don’t want to be defined by the worst thing I’ve ever done.”

In relating these thoughts back to his cancer treatment, Festa insists that his fellow runners’ resilience “goes beyond just platitudes.” To him, they’re key to his survival. “This community comprises people with so much knowledge and inner strength. Very often, they’ve navigated really difficult circumstances and walked a razor’s edge on their path to freedom.”