The Rise of the American Urban Hostel – Next City

The Rise of the American Urban Hostel 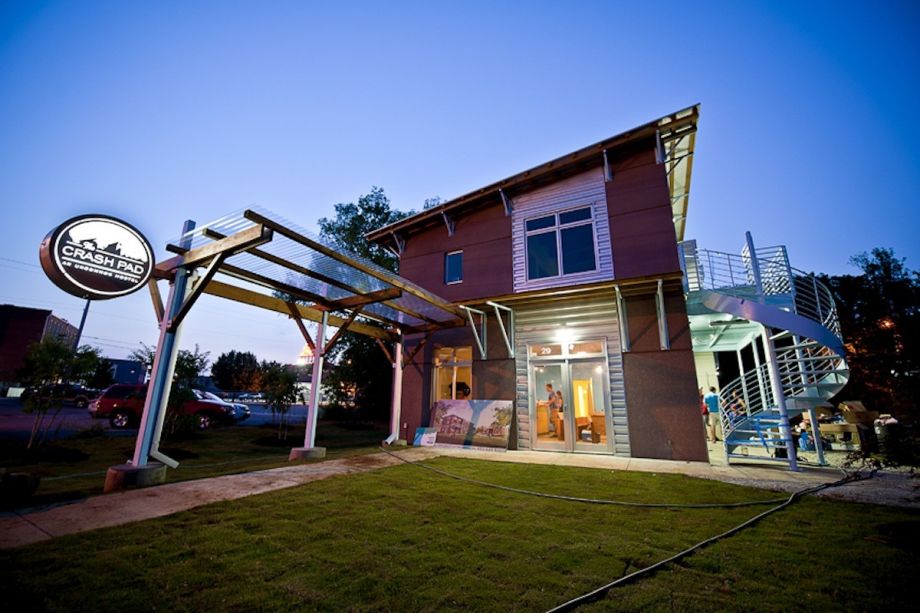 Outside The Crashpad in Chattanooga.

In lieu of an overpriced Marriot in a tourist-infested part of town, travelers can now opt for something more affordable and eccentric: A hostel. From Detroit to Chattanooga to New York, urban hostels have become an economic boon for both owners and guests.

Now, the term hostel might conjure up images of trust-fund hippies and filthy sheets at a hostel down some dark-lit Rotterdam alley. But these new hostels — some even use the far more comforting “B&B” — are clean, offer wi-fi and give travelers a much more real view of the city than some 12×10 room at the Hilton across the street from TGI Friday’s and Ripley’s Believe It Or Not.

In Chattanooga, where we are this week for our annual Vanguard conference, The Crashpad sits on the south end of the city and has a unique business model: They don’t have to worry about seasonal downtimes. The fall and winter is high season for rock climbing and bouldering in Tennessee, and you can find it any direction you head out of the city. The Crashpad, run by climbers, caters to this crowd.

“So the climbers buoy us during the winter months when all the other hotels are a little bit slower,” John Ying, Crashpad’s general manager, told me. “We don’t experience a lot of seasonality that a lot of other hotels do because we’re very climbing and outdoor athlete centric.”

The founders put a lot of sweat equity into it and opened up a restaurant, The Flying Squirrel, next door. The initial plan was to open at the same time — The Crashpad opened in June 2011 — but, “we realized that it takes a lot more work to open a bar than just putting a sign post and serving booze to your friends,” Ying said.

And in Brooklyn, a group of enterprising young artists invested sweat equity into a worker-owned bed and breakfast, 3B. The bed and breakfast opened in 2010 and the co-op model — each person works 10 to 15 hours a week — covers rent, utilities and shared groceries, affording them the time to pursue projects that a full-time job might not allow.

The DNA these three spaces share is their affordability, communal atmosphere and a more, dare we say real, way to take in a city. Here, you get to see how a city actually moves, rather than elbowing past dads in cargo shorts.

Catherine Lacey, one of the founders of 3B, wrote about her experience for the New York Times last weekend. The whole piece is worth a read, but here she explains how 3B benefits both owner and guest:

Many artists work service jobs like these in order to make ends meet, but they also happen to be particularly well suited for the cooperative structure. In addition to workers’ making a higher wage and having greater control of their schedule, the client’s or guest’s experience is often better when workers are more deeply invested. Personally, I have never cared much for making a bed, but I’ve always taken a lot of pride in putting a room together at our bed-and-breakfast because I know it’s not just a chore, but a necessary part of being a worker-owner, and I know I’m being paid fairly.

Still a skeptic of the worker-owned co-op model and how it might help make cities just a little more vibrant? Lacey’s first novel, Nobody Is Ever Missing, is out this July.