The Plight of America’s Colosseum – Next City

The Plight of America’s Colosseum 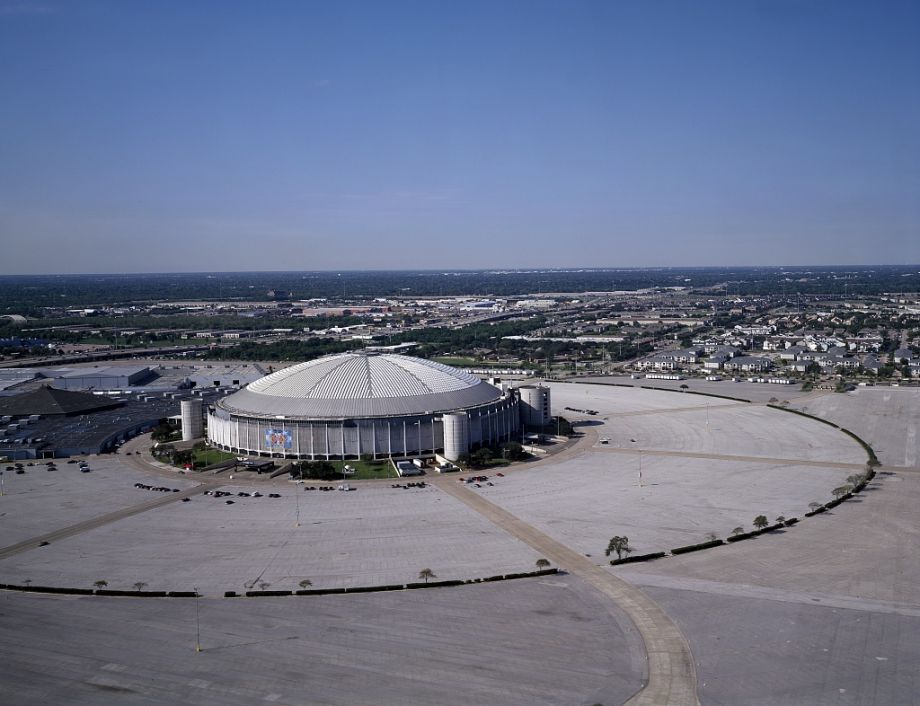 Houston voters on Tuesday rejected a $217 million bond issue that would have renovated the Astrodome, a modernist sports arena sometimes known as the “Eighth Wonder of the World.” A crowd-sourced effort to save the country’s most famous stadium had deep backing from preservationists, including the National Trust for Historic Preservation. Yet the defeat — somewhat close at 53 percent to 47 percent — does not seem to necessarily doom the modern American colosseum or rebuke its architectural style.

As Harris County Commission member Steve Radack told the Associated Press, “It’s anybody’s guess now.” Radack and the four other commissioners will hold the ultimate guess whenever they vote to take action on the structure, which has been vacant since 1999. Meanwhile, the semiotics of architectural appreciation seem more confounded than clarified by the vote.

In Architect Magazine last month, critic Alexandra Lange offered a thoughtful response to my essay on the demolition on Prentice Hospital, a Bertrand Goldberg-designed Brutalist structure in Chicago, as possibly being a clarion “Penn Station moment” that could galvanize a modernist preservation movement. According to Lange, modernism’s “Penn Station” would need to be a different type of building than a quirky concrete hospital.

Lange instead sees the battle occurring over a building that possesses three updated Vitruvian qualities of beauty, popularity and history. She suggests that an airport terminal or stadium would be the more collectively admired building, although she sticks to examples of higher architectural pedigree than the Astrodome.

Has the nation made the Astrodome into a powerful and motivating symbol of modernism’s plight? No, but that actually shows a positive acceptance of the style. Few media reports of the referendum this week even discussed the building’s style, let alone the usual quibbling over appreciation of modern design. Reporters quoted voters more concerned about the cost of the proposed renovation. The vote went down peacefully, without much of the palpable outcry that led to the recent preservation victory for Hilario Candela’s Miami Marine Stadium.

Furthermore, the referendum seems to have deferred, not set, the Astrodome’s doomsday. Perhaps footage of the Astrodome being dynamited, like what happened to its scion Kingdome in Seattle in 2000, would prove galvanizing. Perhaps not. The Astrodome is best known for its sweeping, open, contained interior. Its architectural impact is established through scale rather than detail, and images of its exterior often seem static and unimpressive. Yet any television viewer who has glimpsed its massive floor and imperial dome cannot help but feel awed while being transported into an ethereal American space that is somewhere and nowhere, all at once.

Inside the Astrodome, a visitor sits on the field under the famed skylights. Credit: The Library of Congress

Television certainly catapulted the Astrodome into the American consciousness, making it a more universal work than Prentice or Marine Stadium. Millions have “been” there, and the name needs no explanation. The Astrodome ushered in an era of modern sports facilities designed for interior and broadcast experience, not public interface through outward civic expression. In some ways, it is a fitting modernist landmark for the nation today, in which collective identity seems more experiential than moral or aesthetic. The dome shielded people from the particular and local.

Until its closure in 1999, the Astrodome was the broadcast setting to mainstream sporting events, concerts and oddities like daredevil Evil Knievel’s jump over 13 cars in 1971 and Bobby Riggs and Billie Jean King’s tennis match (the “Battle of the Sexes”) in 1973. Most recently, the mighty structure seared itself into the epic and unresolved recovery narrative of Hurricane Katrina. Thousands of refugee Americans made the Astrodome into a camp in 2005, turning the stadium into a panopticon of despair. The Katrina housing episode alone should make the Astrodome a future National Historic Landmark.

The Astrodome has been the backdrop of the theater of American public life, from obsessive interest in professional sporting events to arena rock concerts to the agony of poverty and natural disaster. There is a universality established through the multiplicity of events that have taken place there — it is not a stadium, or a venue, or an arena. The Astrodome simply is the Astrodome.

Opened in 1965, the Astrodome may well be a harbinger of postmodern practice. Modernism produced exquisite utilitarian dual-sport round stadiums, like Edward Durrell’s tragically lost Busch Stadium in St. Louis. The “cookie cutter” universality of these monuments was undercut by rigid adherence to purpose. The Astrodome transcended the cookie cutters by inverting the dichotomy: Its uses were universal, its form singular.

The north entrance in 2004. Credit: Library of Congress

Whether the Astrodome is beautiful is almost irrelevant to its cultural value. However, its design offers a subtly perfect integration of interior and exterior — and a suitable evaporation of architect ego in its colossal, crowd-focused form. The architectural firms of Wilson, Morris, Crain & Anderson and Lloyd, Morgan & Jones designed the Astrodome, but their works are not nearly as vaunted as Betrand Goldberg’s. The Astrodome’s lineage avoids modernist superstars, which perhaps is one of the reasons that the characters in its popular story are mostly regular people who sat in one of its thousands of seats.

The Astrodome and its successors returned the civic expression of public facilities back to the individual users, changing forever the use of sports facilities (even briefly for the better, as Curtis & Davis’s sublime, neo-Jetson 1975 Louisiana Superdome shows) to enshrine popular virtues. After the Astrodome, such facilities’ designers were concerned with view lines of both occupants and television cameras. Our access to these facilities became an expression of our own choices of what to watch and when to watch it.

Our current inability to frame a modernist “Penn Station” moment may be shaped by the same forces that the Astrodome enabled. When Penn Station fell, critical voices discarded modernist scorn for ornament, critical perceptions about the station’s flaws as a Beaux Arts work (and there were complaints in its time), and arguments based on personal stylistic preference. The Penn Station moment happened because people aligned their interest in the building for collective goals, not because it expressed a personal stylistic preference with perfect architectural form.

Today, we can quibble about any one of the modernist buildings we see. Modernism’s drive to inculcate the world with transcendent styles turned out to produce few major American works of uncontested architectural genius. Preservationists have fended off a divided public jury while pressing to safeguard threatened works like Paul Rudolph’s Brutalist Orange County Government Center in New York, seemingly spared, and Richard Neutra’s Cyclorama at Gettysburg, now lost. Iconography has been a fickle science for the work of “name” architects, whose deepest admirers (and strongest detractors) tend to be already-invested specialists. The masses, meanwhile, have instead fixed upon quirky landmarks like a round gas station in St. Louis and ranch houses across the nation.

Nowadays, preservationists do not have to defend Second Empire or Art Deco buildings against a litany of aesthetic critique. Popular sentiment holds that buildings in older styles are exemplary of larger patterns in design. Modern architecture, meanwhile, engenders a heap of arguments from layman and educated critics alike. Perhaps modernism’s drive to create singular works in a universal language keeps people too focused on the things that make modernist buildings aesthetically different while overlooking traits that embody mass experience or connection.

Although facing an insecure future, the Astrodome is more the poster child of acceptance of modernism as a cultural setting than it is of the ongoing threat to modern architecture. The Astrodome is a populist structure whose breathtaking form was a store of recent, truly popular memory. People don’t emphasize the Astrodome’s design, but rather its significance to their lives — joining it in memory to older buildings like churches and town halls across the U.S.

Many people can see themselves in the Astrodome, through millions of personal experiences. In an era of atomized human choice, embodied by the Astrodome itself, that says a lot.

Gallery: The Astrodome Through the Years