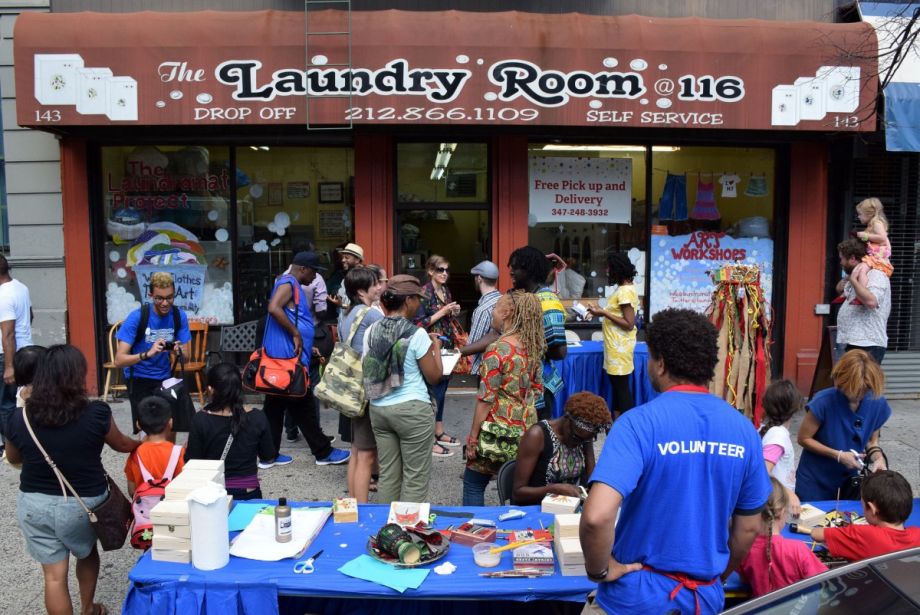 Risë Wilson developed the concept behind The Laundromat Project in the late 1990s while attending graduate school at New York University and living in Bedford-Stuyvesant, Brooklyn. Her idea was to own and operate a functioning neighborhood laundromat that doubled as a neighborhood hub for the arts. Even then the predominantly African-American neighborhood of Bed-Stuy faced decades of redlining, disinvestment and city neglect.

Twenty years later, after the organization evolved and placed roots in both Harlem and the South Bronx, The Laundromat Project is returning to Bed-Stuy. Its new centralized headquarters, set to open in 2021, mark a new phase for a community-centered organization primarily led by artists of color. It returns to a neighborhood altered by gentrification that has hardly benefited all residents, with COVID-19 exacerbating the inequalities.

Wilson called Bed-Stuy “a space of Black resilience, creativity and entrepreneurship” in a press release announcing the organization’s move. The challenges posed by COVID-19, according to executive director Kemi Ilesanmi, “gave us something to root for, to grow into, and a very clear vision of what the stakes were and why we wanted to get to the other side of this crisis.”

The Laundromat Project has actually never been a laundromat. Early on, there wasn’t enough capital to acquire a Bed-Stuy laundromat and begin the project as intended. In 2005 it was officially incorporated with funding from the Echoing Green Fellowship and a grant from the Brooklyn Arts Council to kick off community projects across New York.

The first public program, a fabric mural workshop, took place inside a Bed-Stuy senior center. Then the Create Change Artists-in-Residence program allowed artists to stage projects in laundromats across the city. “It ended up freeing us to actually think about the whole city,” Ilesanmi says. “Even since we pretty much haven’t looked back.” In 15 years the Laundromat Project has supported artists in all five boroughs through both fellowship and residency programs. Community-centered arts programming has happened inside libraries, community gardens, public plazas and in partnership with local cultural organizations.

After becoming an official nonprofit in 2010, staff moved into Harlem offices in 2013. Starting in 2014, the Laundromat Project began laying groundwork for truly place- and community-specific programming, collaborating with South Bronx organizations to transform a two-bedroom apartment in the Longwood neighborhood into a hub known as Kelly Street Collaborative.

“There’s this opportunity of being embedded in place that offers you a chance to build deeper trust, be held accountable to people and a neighborhood,” says community engagement manager Cievel Xicohtencatl, who worked closely within the Kelly Street Collaborative. Over five years, local residents were consistently engaged to determine how best the space could support them, as well as Bronx-based artists, educators and community leaders. Offerings included art installations inside the apartment, workshops on knitting, community weaving projects and summer block parties.

The organization also fostered a unique “process-based” practice for artists across the city, according to Hatuey Ramos-Fermín, who participated in The Laundromat Project’s Create Change Artist Residency before becoming director of programs for the organization.

“I get questions if it’s about hanging work or painting a mural at a laundromat,” he says. “But in all of our projects, artists are engaging in the artmaking process and thinking about the projects together with community … that shows up in many different ways depending on the artist’s expertise, their medium and the way that they work, from photography to theater to performances.”

In 2018 The Laundromat Project kicked off a strategic visioning that prioritized centralizing in one place. “The very first thing was to name it to ourselves as a possibility,” Ilesanmi says. “Then we gave ourselves all of 2019 to go through a collective process on where that place might be.”

The organization narrowed in on Bed-Stuy and Harlem, where much of its artistic community is located. They held focus groups with Laundromat Project artists, the organization’s board members and staff, community members, partners, advisors and funders. They carried out research that considered factors like nearby public housing, local anchor organizations and resident income levels. They held walking tours of the neighborhoods and interviewed community leaders. “We wanted to get a sense of what was needed, where we were needed and where we could make a difference and be a part of the community,” says Ilesanmi. “I like to think that we went slow so we could go fast.”

At the end of 2019 the organization closed the Kelly Street Collaborative and began a real estate hunt in both neighborhoods. They ultimately felt a two-story space with a small garden on Fulton Street, a main drag of Bed-Stuy, fit the bill. “We signed the lease about a week into COVID,” Ilesanmi notes.

COVID has both transformed the current work of The Laundromat Project and the future of its Bed-Stuy headquarters. One residency project based in Woodside, Queens, added to their series of community conversations and public art activations for Filipino residents by creating a rapid-response mutual aid project pairing Filipino restaurants in Queens with hospitals to provide free meals to frontline health care workers.

As The Laundromat Project continued its community outreach specifically with Bed-Stuy residents, arts organizations, block associations, community gardens, houses of worship, businesses and libraries, they’ve addressed needs around the pandemic. “It’s super imperative as we look to rebuilding in the city, how we can redistribute resources and be of help to local artists and creatives that we know are suffering,” says Xicohtencatl. “These listening tour calls have an ear out for what we can be supporting and creating.”

The community engagement is also crucial as the organization returns to a neighborhood significantly changed by gentrification and rising real estate costs. “We really want to understand how not to be part of a gentrification or anti-displacement wave, but instead be a value add to the community,” says Ilesanmi. “That takes actual work and self- reflection and conversation and reciprocity with community.”

The Laundromat Project has taken both the pandemic and this summer’s protest movement as an opportunity to slow down, listen and use that feedback to refine its values and vision for the Bed-Stuy headquarters. The organization expects to wrap construction early next year and then focus on virtual programming, as well as outdoor and hybrid programming as safety standards allow. Staff are also getting creative on what programming may look like as the pandemic wears on, including window, broadcast and sound installations.

“There’s so much we have learned this year, and in 2021 we can take that information and take it to the next level,” Ilesanmi says. “Maybe there’s programming inside the building, or on the building … we’re open to all the possibilities. We do know it’s all going to be centered on speaking to our artists and neighborhoods, doing as much as possible in coordination and rhythm with the communities we care about.”

Tags: arts and culture, brooklyn, for whom by whom