The Next 20 Years for New York’s MTA – Next City

The Next 20 Years for New York’s MTA 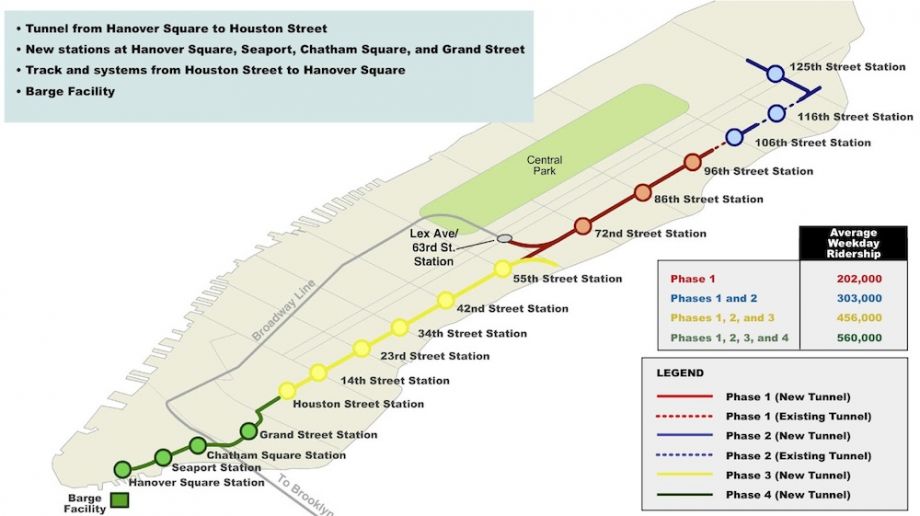 The Metropolitan Transportation Authority, the coordinating body for mass transit (plus some bridges and tunnels) for New York State’s half of the greater New York region, has just released what it calls its Twenty-Year Capital Needs Assessment). The document looks ahead to the period from 2015 to 2034, listing everything the MTA would like to accomplish on the capital side of its budget, from rehabilitating existing tracks and buying new trains to digging new subway tunnels.

The first thing that jumps out is how much money the authority thinks it needs. The MTA has identified a full $106 billion in capital needs simply in maintaining the existing system, not a dime of which would go to extending the system outward along planned corridors like Second Avenue in Manhattan, or more tentative ideas floated by advocates like rekindling the Nostrand and Utica Avenue extensions in Brooklyn, both of which have fallen by the wayside.

That 20-year $106 billion figure is about equal to the $99 billion (in inflation-adjusted 2011 dollars) that the MTA spent on capital projects, excluding so-called “mega-projects” like the first phase of the Second Avenue subway or other newly built lines, from 1982 to 2011. That is to say, the MTA says it needs as much money over the next 20 years for system renewal as it got over the past 30. Most of the money — $68 billion — will go toward the subway, with the remainder divvied up between commuter railroads (the Long Island Rail Road and Metro-North, serving the city’s northern suburbs).

And this doesn’t include the billions of dollars that the agency has received, or likely will, for Hurricane Sandy-related repairs and mitigations for future storms.

In addition to maintaining current service levels, some of this money would go toward upgrading signaling systems to handle more trains per hour, increasing the capacity of existing lines. (At $15.6 billion, this makes up the single largest chunk of the total ask.) It would also go toward installing “countdown clocks,” which already exist on the numbered lines, that let waiting passengers know when to expect the next train. New fare payment media, replacing the existing MetroCard, is also on the table, as are more escalators and elevators to fulfill the agency’s duties under the Americans with Disabilities Act.

As far as physical infrastructure, the biggest piece needing replacing is the Rockaway Line, which carries the A train across Jamaica Bay from mainland Queens to the Rockaway peninsula, hard hit by Sandy. Despite the recent repairs, the MTA says that “major reconstruction and/or full replacement will be required within the 2015-2034 period.”

Beyond those more quotidian capital needs, the MTA has reiterated its desire to complete the Second Avenue subway, building out the line to 125th Street in Harlem and then below 63rd Street to Midtown and down to the Financial District. It did not, however, include a price tag for these phases.

It also wants to build the station on the 7 train extension in Hell’s Kitchen, previously budgeted at $450 million and canceled due to cost overruns on the line. An expanded bus rapid transit network also gets a shout-out. In addition, the agency floats the idea of using existing main line rail rights-of-way in the outer boroughs to strengthen the radial network — that is, lines that go between boroughs and do not enter Manhattan:

A possible option is the utilization of abandoned or underutilized Rights of Way such as the LIRR Bay Ridge Branch (linking southern and eastern Brooklyn with Central and northern Queens) or the abandoned Rockaway Beach Branch (linking Howard Beach and Ozone Park with Woodhaven) as transverse routes linking radial subway lines. Conversion of existing ROWs, where a solution to an identified travel need can be defined, could help reduce land acquisition and construction costs, and facilitate construction time in densely developed areas.

The report also touches on a potentially transformative idea for the commuter rail network: reconfiguring it into a true “regional rail” network, that provides service directly through Penn Station. This would require cooperation with New Jersey Transit, but would make much better use of the station and its existing tracks and platforms, potentially allowing the MTA to pave over some tracks to create wider platforms to ease crowding (though this was not specifically mentioned).

The MTA also suggests that it might look into buying articulated train sets in the future. That is, trains with openings between the cars, allowing free movement without a dangerous trip out of the car. This would allow commuters to more evenly space themselves throughout trains, as well as open up a bit more standing room in spaces that are now closed off.

You can download and read the whole report as a PDF here.