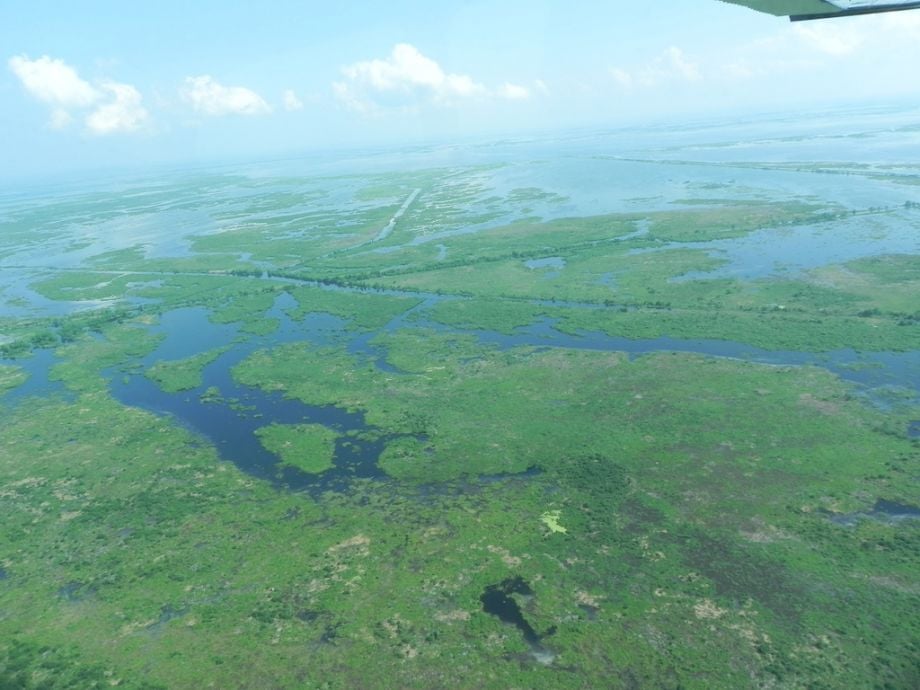 Louisiana’s wetlands are disappearing in part because of efforts to save the region from flooding. Credit: Louisiana Sierra Club

Scientists use cancer as an analogy to describe the erosion of the Gulf Coast — it aptly captures the pernicious process of degradation, as well as its ability to elude cures. When scientists describe the “Gulf Coast” in Louisiana, they are not referring merely to the line along which the land meets the Gulf of Mexico, but to the entire bottom third of the state, which is largely comprised of deltaic wetlands. This whole area is being eaten from within, and its disappearance will expose New Orleans’ flood protection system to storm surges stronger than it can withstand.

The causes of coastal erosion are elaborately interlinked — simplistically, they break down to sediment deficiency and saltwater intrusion. Sediment from upriver is what builds deltaic land. Levees constructed along the river for flood protection, navigation routes and other purposes trap sediment that would otherwise become part of the delta, shoring it up. Researchers are currently conducting a massive study to determine how much sediment Gulf Coast rebuilding efforts have to work with, but preliminary estimates suggests the amount is less than half of what would naturally occur. Many of these levees also cut off vital sources of freshwater to marshes, which are increasingly threatened by the intrusion of saltwater that seeps up the canals cut through the wetlands to facilitate pipelines for offshore oil extraction. The water’s heightened salinity kills the plants whose root systems literally hold the land together.

Sea-level rise induced by climate change threatens all coastal communities, but cities on river deltas are experiencing the effects first, because of the land subsidence that naturally occurs in delta systems. This subsidence, coupled with the deficiency of sediment, has made the Mississippi Delta region is the fastest-disappearing land on the planet. Unlike the millions-of-years-old rocky Eastern seaboard of the United States, however, land in river deltas is relatively new and malleable, and what disappears can be rebuilt — albeit only with massive amounts of resources and political will.

Among the most promising current approaches to rebuilding wetlands around New Orleans involves planting cypress forests grown with the help of wastewater. Hurricane Katrina knocked over approximately 320 million trees, but among the wreckage, numerous groves of upright cypress remained. Biologist Gary Shaffer, a leader of the project, says cypress roots create a tapestry so dense that the trees along the Gulf Coast have been able to weather generations of hurricanes.

“Time and time again,” he says, “the cypress swamps have stood strong.”

A digital model Shaffer and his team created illustrates the potential protective capacities of cypress forests for New Orleans. As they withstand a hurricane’s destructive forces, the trees function as buffers, slowing and weakening the storm’s effects as it moves inland. The more cypress trees a hurricane encounters on its way to New Orleans, the better the chances the city’s flood protection system will stand strong.

At the same time, Shaffer’s model shows the danger of creating nautical navigation routes without properly considering their effects on storm defense. In the 1960s, the Army Corps of Engineers created the Mississippi River Gulf Outlet (MRGO)—commonly called “Mr. Go,” a shortcut for ships sailing from the gulf to New Orleans. Mr. Go directly or indirectly killed about 63,000 acres of cypress-dense wetlands in the Lake Pontchartrain Basin, and the channel acted as a funnel during Hurricane Katrina, sending its storm surge directly to New Orleans. Shaffer’s model reenacted Katrina’s landfall, but with conditions on the coast much as they were prior to the creation of Mr. Go. In that reenactment, the flooding in New Orleans during Katina was reduced by roughly 80 percent. Most dramatically, Shaffer’s team calculated that this amount of flooding would have resulted in zero loss of human life in the city.

In a recent TED Talk about the efforts to plant wastewater-fed cypress forests, Shaffer encouraged his audience to “take a few good shits on America’s delta.” The introduction of freshwater sources throughout the wetlands is crucial to rebuilding them, and while many scientists agree that removing levees and diverting branches of the river into marshes is the most important single step to creating a sustainable coast, toilet water will work in a pinch. In fact, Shaffer says, treated wastewater shares a lot of properties with river water that are important for wetland survival—it’s nutrient-rich, fresh and can be made to move in and out of marshes through outfall control. Currently, areas of the coast that are not connected to freshwater sources suffer a severe nutrient deficiency, up to 100 times lower than those connected to the river system, which results in widespread wetland death. But while opportunities to destroy levees to divert the Mississippi River are limited by human settlement, wastewater can be piped to any location in need of a rejuvenating drink.

In upcoming months, Shaffer’s team, along with Dr. John Day’s team at Louisiana State University, will plant 2,800 bald cypress and water tupelo seedlings in two seven-acre cells that have been created to test the efficacy of a new type of wastewater disinfection. In one of those cells, they are also building a wetland nursery to produce thousands of bald cypress and water tupelo that will be planted, in part, in assimilation wetlands with reliable sources of nutrient-rich fresh water. Another 10,000 trees are already being grown with the help of wastewater at a site Shaffer oversees in nearby Hammond, Louisiana.

Eight assimilation swamps currently exist in Louisiana — the oldest, near Breaux Bridge, dates back to the 1950s and is the only place in the state where soil rise is staying ahead of sea-level rise. With $10 million already secured from the federal Coastal Impact Assistance Program, investigators from Tulane, LSU and Southeastern University are embarking on what they hope will become a $60 million project to create the world’s largest assimilation wetland in the Central Wetlands Unit. The hope is that the marriage between cypress swamps and assimilation wetlands eventually is embraced in all of coastal Louisiana.

Crews contracted by BP, and under the direction of the Coast Guard, anchor containment boom off of sensitive wetlands bordering Barataria Bay, La. Credit: Deepwater Horizon Response via Flickr

Shaffer’s plan, ideally executed, would utilize all of the wastewater created in New Orleans and result in the planting of 2.6 million cypress trees. But even this daunting scenario is less resource-intensive than other proposed approaches, such as systematically dredging sediment and redistributing it through pipelines and other means, a key tenet in the $50 billion master plan approved by the Louisiana Coastal Protection and Restoration Authority in 2012. Funding for this master plan is tenuous at best — many hope that a lucrative outcome from the ongoing BP oil spill trial could pay for it. If that doesn’t happen, there’s not much in the way of a backup plan.

Ecologist Len Bahr has served Louisiana under five governors in various high-level capacities in agencies dedicated to coastal activities and science. Although he proclaims deep respect for Shaffer and his project — and, in particular, for Shaffer’s work related to combating the menace of nutria, an invasive species of dog-sized rat from South America that ravenously devours wetland flora — he fears that Shaffer and others are merely “dealing with the veneer of the delta, the surface,” and that, by the nature of their disciplines, most scientists involved in coastal rebuilding underestimate the importance of considering the delta’s tectonic process at the geological level, which ultimately determines how the delta behaves — and whether it can be saved.

More troublesome to Bahr still is the general lack of involvement of scientists in the overall decision-making process concerning the coast. This is not for wont of good scientists in the region, but a question of politics — in particular, the dominant brand practiced by conservative politicians such as Gov. Bobby Jindal, who disavows global warming (and signed into law a bill that introduces creationism into the classroom).

“We have a brain trust of scientists that are never really brought in,” says Bahr. “A few have got their foot in the door recently, but science has been a threat to politics. They don’t want to hear the truth.”

Another political factor stymieing rebuilding efforts is the influence of the petroleum industry on Louisiana state and local governance. One potentially tremendous source of funding for rebuilding efforts could come from a lawsuit of historic scope recently filed against nearly 100 oil and gas companies by the Southeast Louisiana Flood Protection Authority – East for the companies’ role in coastal erosion, which scientists estimate is somewhere between 30 and 60 percent of the total damage. The flood protection agency was created after Katrina as an apolitical board sheltered from the influence of lobbyists, but after it filed the lawsuit, Governor Jindal ousted the suit’s most vocal proponent and abruptly canceled a state subsidy for the board, sending a strong signal indicating where his affinities lie.

“Right now, there’s no really good solution for New Orleans,” says Bahr of efforts to rebuild the coast and protect the city from storms. “It’s very difficult to get a consensus of people. Many scientists work for state institutions and are reluctant to speak out against the government. It’s really sad. We’re sort of a banana republic for oil and gas. I understand why people are cynical about the government. Maybe there’s a 50 percent chance. But with my sense of politics, I don’t see the will at the state or national level. I don’t hold out a lot of hope.”