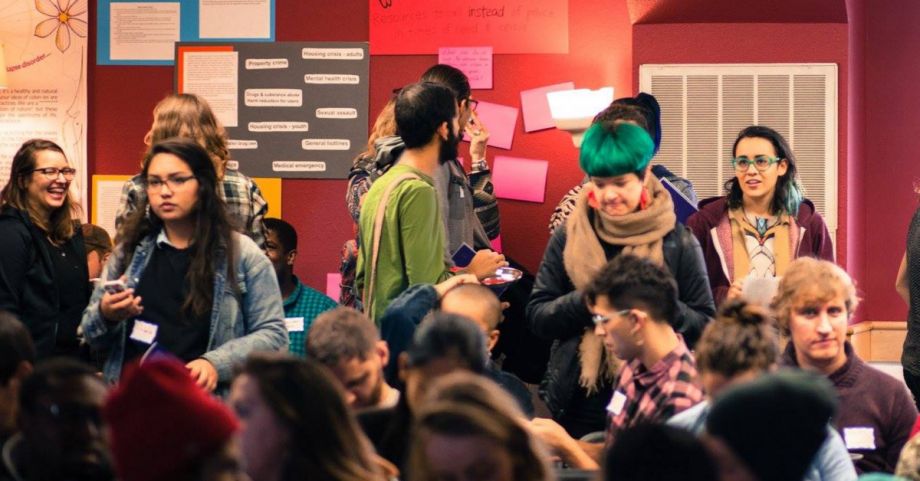 In 2017, 150 years after the Minneapolis Police Department was founded, MPD150 released a “performance review” of the department's first fifteen decades. The report's release in November 2017 went out to a crowd of 300 people. (Photo by Ryan Stopera of Ubuntu Media, courtesy MPD150)

It’s been a month of progress addressing police brutality in the city since a member of the Minneapolis Police Department killed George Floyd on May 25th. While many cities have called for police reform in response to widespread protests, Minneapolis lawmakers and city agencies have called for something closer to abolition. A loose group of activists known as MPD150 formed back in 2016 to push for this exact moment — they just didn’t expect it to happen so soon.

“We didn’t want conversations about policing to be able to take place in the media or anywhere else without abolition at least being one of the words that comes into the conversation,” explains Ricardo Levins Morales, an organizer with MPD150. “We had no idea it would move as quickly as it has. When you’re scattering seeds hoping it will rain someday, you’re not necessarily planning on a monsoon.”

Levins Morales was part of a core group of Minneapolis organizers, activists and artists who realized in early 2016 that 2017 would mark 150 years since the founding of the Minneapolis Police Department. “We thought maybe it was time for a performance review,” he says. “We assumed that if there was any official history about the police it would be a whitewash, and in fact there was no history written.”

The group decided to look at the police department through the lens of “past, present and future,” Levins Morales explains, as reviewing the MPD’s performance could help the community decide whether its “contract” should be extended. And so they delved into fifteen decades of history since its department’s founding in 1867, with a focus on its treatment of marginalized communities. Their 2017 report, ultimately, was broken up into sections on past, present and future.

The section focused on the past laid out the origins of policing in the U.S., the rapid growth of the Minneapolis Police Department after its founding and the ways the force became “larger, more sophisticated, and increasingly brutal.” For the section on the present, the group reviewed the present state of policing, informed by interviews from community members on how the Minneapolis Police Department functioned in their lives. The report pointed out that 2016 saw an all time high in deaths caused by police shootings, according to the Minnesota Bureau of Criminal Apprehension, even though the crime index hit a historic low in 2016.

The history and present state of the MPD convinced the group to make a case for abolition in its section on the future. “We wanted to imagine what a world could look like without police — not just knowing what we don’t need, but lifting up what we do need,” says organizer Molly Glasgow. A separate section titled Alternatives laid out alternative ways to address issues including domestic violence, homelessness, drugs, property crime and traffic stops.

MPD150 released the report to a crowd of 300 people. Their vision of abolition found traction early on, according to Levins Morales. A separate questionnaire designed for City Council candidates, which some MPD150 organizers participated in, asked candidates if they could imagine a Minneapolis future without police. A number of them said yes, prompting the City Council president to denounce police abolition in a press conference.

The release of the report was followed by producing other materials like zines, speaking in schools, organizing panels and events. A 2018 exhibit in Minneapolis’s heavily policed north side outlined findings of the report alongside art commissioned from artists in the city’s marginalized communities. As the work continued, “the power structure and media ignored us,” says Levins Morales. “We also ignored them since we saw our work as community oriented. At one time the police chief and the mayor each reached out to us to meet, but we turned them down.”

At the same time, two grassroots organizations MPD150 is closely aligned with, Reclaim the Block and Black Visions Collective, built relationships with city council members. MPD150 saw its role as supportive to that movement building, with a focus on changing the narrative around the police department and police abolition. “We’re not here to be another permanent group, put out press releases or demand a place at the microphone,” Levins Morales explains.

Plans to sunset the coalition after its third year were abandoned after COVID-19, followed by George Floyd. “The uprising has changed that chemistry — it is clear this is not the moment to vanish, when so many people are looking for materials to try and figure out what all this means,” says Levins Morales. Suddenly the wider public, politicians and mainstream media were ready to talk about abolition. MPD150’s “Building a Police-Free Future: Frequently-Asked Questions” zine was shared tens of thousands of times in the early weeks of the protests.

MPD150 mobilized to provide more information on police abolition, including the article “What are we talking about when we talk about “a police-free future?” to address concerns like addressing violent crime without police. They will also release an expanded version of the 2017 performance review in the coming weeks as well as a comic book titled “Community Policing and Other Fairy Tales,” to refute the reform efforts of community policing.

Perhaps the most impactful response has been from Minneapolis City Hall. As MPD150 and Reclaim the Block organizer Jae Hyun Shim pointed out in this recent interview with the Forge: “It’s been the same City Council members in their seats the whole time that we’ve been doing this campaign … The MPD150 report made it over to City Hall. It got put in every Council member’s office, all of the aides had it.” Early this month, the majority of city council members pledged to “begin the process” of dismantling the police department.

Both Levins Morales and Glasgow spoke to the powerful feeling of seeing police abolition come to the forefront in a way they haven’t before. “We are committed to make sure the resources we created get out not only to people in Minneapolis and the state, but to other cities that are looking to shift how racist policing still manifests in our country,” Glasgow says.

Levins Morales stresses that organizing against police brutality is far from over, but it’s still an accomplishment to see police abolition treated as a viable solution to police violence, as opposed to an unrealistic or unattainable vision.

“We saw how after every police atrocity there was outrage from the community and people reached for the best options on the menu for what to demand — and that was a pretty tepid menu,” he says. “Our goal was to flip the narrative, so instead of [abolition] seeming like a dreamy, naive, utopia idea, it could be presented as the only pragmatic option. In fact, believing the police can turn into their opposite — that’s the magical thinking.”