The Lingering Effects of Youth Experiencing Disconnection – Next City 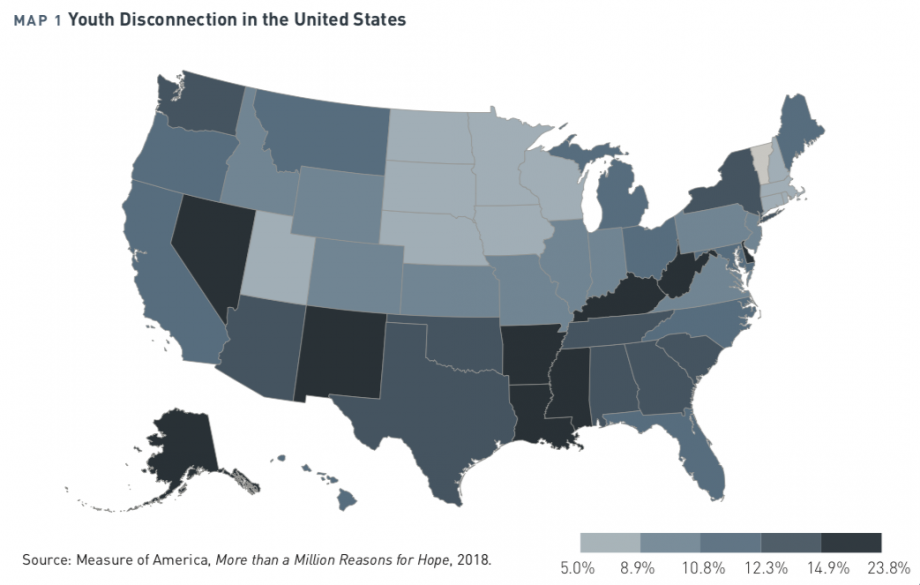 For young people, spending any significant length of time out of school and unemployed between the ages of 16 and 24 can have long-lasting impacts on employment prospects, income, homeownership, and health. The effects of that type of “disconnection” are worse the longer the disconnection endures. And the disadvantages compound over time.

That’s according to a new report from Measure of America, a program of the Social Science Research Council, called “Two Futures: The Economic Case for Keeping Youth on Track.” The report is the first to follow a cohort of what the group terms “disconnected youth” or “opportunity youth” over the course of about fifteen years. Researchers monitored the “life trajectories” of disconnected youth at stages five, ten, and fifteen years after their experience of disconnection.

“The reason why we look at youth disconnection is that it can be a real bellwether for the health of the community, and it really correlates with well-being for the overall community,” says Rebecca Gluskin, deputy director and chief statistician at Measure of America and a co-author of the report, which was funded by the Schultz Family Foundation.

As the report notes, disconnected young people are more likely to be poor, have dropped out of high school, or have parents with low levels of educational attainment. They’re also likelier to have a disability, be mothers, and be institutionalized. Neighborhoods with high rates of youth disconnection are also likelier to have been affected by racial segregation and high unemployment while having higher populations of older generations who also experienced disconnection during their own youth, the report says.

The report also measures the cost of youth disconnection to society as a whole. If all disconnected youth were “reconnected” to jobs or education, the federal government would be able to collect an additional $55 billion in tax revenue, or around $11,900 per individual. At the local level, investing in disconnected youth could mean an extra $150 million in annual revenue for a city like Atlanta or an additional $610 million for a city like L.A., the report says.

“It’s not only an important social issue but, what this report is saying is, we’re paying for the investments we’re not making today,” Gluskin says.

Karen Pittman, the co-founder, president and CEO of The Forum for Youth Investment, says the Measure of America report provides hard evidence to support investments in programs that help young people at all age ranges — not just the earliest interventions.

“The fact that young people who are disconnected from schools or the labor market don’t do as well as young who stay connected in that 1-24 range — that’s not news. We know that,” Pittman says. “But the idea that the extent of the gap between the connected and the disconnected gets greater 15 years out — that is news. They don’t catch up. It’s a lingering effect.”

To address the rate of youth disconnection and help more young people find employment education, the report recommends that employers should listen and responded to the views of young people, and create training programs and policies that are geared toward at-risk, first-time workers. It also recommends that businesses can set data-driven goals, and help support workforce development efforts in cooperation with schools, philanthropies, financial and health systems, and the criminal justice system.

Pittman says that people between the ages of 16 and 24 need fairly concrete things in order to stay connected to job and education opportunities: child care, health insurance, housing, predictable work schedules. So it makes sense to recommend listening to what young people say their needs are, Pittman says.

“The voices of young people themselves has really been what’s powered this movement,” she says.

Measure of America hopes the report will help build a case for investment in disconnected youth.

“The point of this report is to show that this group of young people are really a resource that can be tapped for both the economy and … for communities, providing strength and resilience,” Gluskin says. “And they shouldn’t be seen as a cost, because it’s really a missed opportunity if we don’t reengage them.”