The Largest Indoor Recreational Space in Chicago, and So Much More – Next City

The Largest Indoor Recreational Space in Chicago, and So Much More 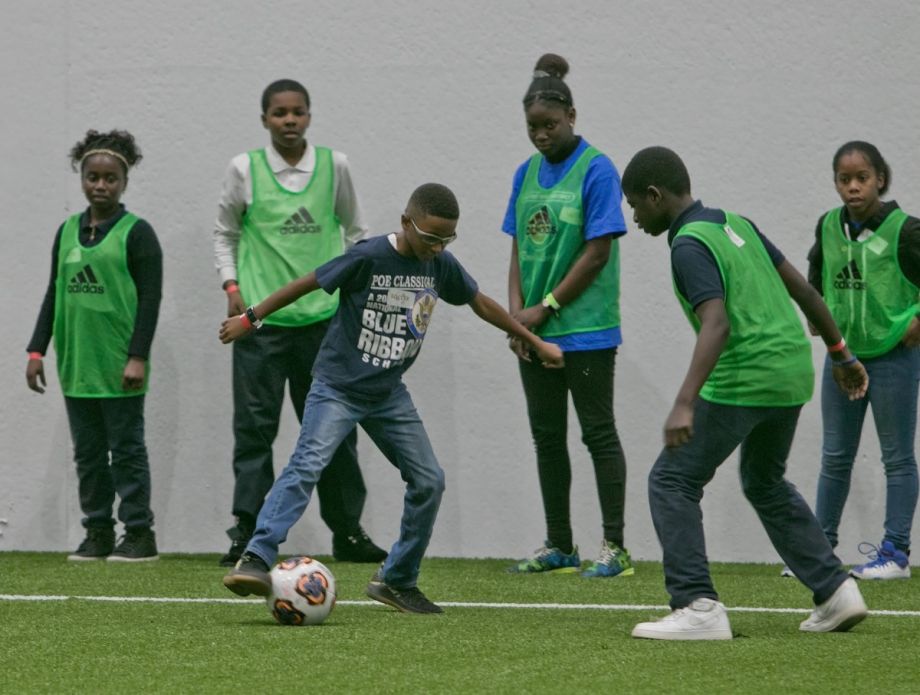 Technically, it had been about a decade of planning, fundraising and building that culminated in last week’s grand opening of the Pullman Community Center, at 103rd Street and Woodlawn Avenue, on the far South Side of Chicago. But for Alderman Anthony Beale, who has represented the area in city council since 1999, the inspiration goes back further than that.

“I can honestly tell you the idea came to me when my sons and daughters were coming up in youth sports, the traveling that we had to do at that time just to have recreation opportunities,” Beale says. “One of the things I noticed traveling throughout the state and the city was how we had subpar facilities in our community, and whenever we went outside the community they had very nice facilities, nice fields, all the amenities.”

Beale got right down to it when he was first elected; he secured some state funding to reconstitute the former world champion Roseland Little League organization and rebuild the first of a string of baseball fields in the neighborhood. But that was just the beginning. The new Pullman Community Center has 135,000 square feet of indoor, multipurpose space, including 1,200 square feet of classroom/party-room space; three hardwood courts for basketball and volleyball; three indoor fields for soccer, baseball and football; and no less than four batting/pitching cages with pitching mounds and pitching machines.

In the Windy City, with its particularly brutal winters and scorching summers, indoor spaces for such a wide range of activities is in short supply, as evidenced by the flurry of activity that Kristin Curtis has already seen as the general manager of the new community center.

“We’ve already had people reach out to us about gymnastics and cheerleading, volleyball and basketball,” Curtis says. “We’re going to have pickleball for seniors. It’s exciting to me because people think community center and they’re thinking about the youth and obviously that’s a very important part of our programming, but it also extends to other people in our community.”

The impact of such a facility can be measured in several ways. There were around 200 construction jobs, and now a projected 30 to 40 permanent jobs to manage the facility, which also includes a 50-seat concession area. There’s the physical and mental health impact of a year-round athletic facility with a walking track that’s already in heavy use, according to Curtis. There’s the academic impact of the after-school support and college test prep that will be available at the facility. On top of that, there’s something less tangible that comes to mind for Beale.

“Too many times, people come from outside the community to tell us what’s best for us. It was a key component to have the whole thing owned, operated and managed by a local group that looks like the community,” Beale says. “That gives ownership, that gives people that are younger inspiration that you can be what you want to be. When they see a facility like that, owned, operated and managed locally, that speaks volumes.”

It’s true, the ribbon-cutting ceremony featured a contingent of representatives from big corporations that donated or loaned funds to build the $20-million facility, alongside Senator Dick Durbin (D-IL), and Mayor Rahm Emanuel — along with Beale and Larry Noble, a senior at nearby Gwendolyn Brooks College Prep (where Beale is the head baseball coach). But from the conception of the project, the idea and now the facility itself is (jointly) owned by the surrounding community through the Roseland Youth Center, which co-owns the facility along with the Chicago Park District.

One of three indoor soccer fields at the center.  (Credit: Chicago Neighborhood Initiatives).

The Pullman and Roseland communities closest to the center are 82 percent and 96 percent black, respectively; the median income for each neighborhood is around $37,000. The 12-acre parcel on which the Pullman Community Center sits was previously part of the Pullman Palace Car Company central rail yard facility, where it built and maintained its famous fleet of luxurious railroad passenger cars. The land was vacant by the time it came under the purview of Chicago Neighborhood Initiatives in 2007 (then known as Park Neighborhood Initiatives).

In the aftermath of the subprime mortgage crisis, the land ownership fell into the lap of U.S. Bank, which kept Chicago Neighborhood Initiatives in place as master developer of the former rail yard. With offices right on the former rail yard grounds, Chicago Neighborhood Initiatives is a nonprofit staffed with “recovering” planners, bankers, and lawyers. A decade ago, the group went out alongside Beale to hold dozens of community meetings to shape a vision for redeveloping and revitalizing the property and the surrounding neighborhood. Four priorities emerged from those conversations: the need for food and retail shopping in the area; the need for jobs; the need for new affordable housing; and the need for year-round recreational space.

Since then, with Beale serving as booster and Chicago Neighborhood Initiatives serving primarily as developer, the former rail yard has welcomed a new retail strip anchored by WalMart; a manufacturing, bottling and distribution center for eco-friendly home goods company Method; the Midwest regional distribution center for Whole Foods; and two Gotham Greens urban agriculture facilities. These businesses have generated some 400 permanent jobs on site, with more on the way. The companies coming in have made local hiring commitments, with a majority of permanent employees so far coming from the former rail yard’s ZIP code or those directly adjacent.

The Pullman Community Center is the latest chapter in that ongoing story. Next up is a food hall populated with local restauranteurs incubated by the small business lending arm of Chicago Neighborhood Initiatives.

The nonprofit has made heavy use of federal New Markets Tax Credits to revitalize the rail yard, including the new community center. The $3.5 billion a year New Market Tax Credits program is set to expire after next year, although there is bipartisan support in Congress to extend it or even make it permanent. Some critics call out the high consulting fees related to the program’s onerous application process and ongoing compliance, and some say the program subsidizes investments that banks should be making anyway. Chicago Neighborhood Initiatives has utilized the program as a key tool to catalyze around $465 million of investment (so far) in and around Pullman and Roseland.

Notably, there were no city budget dollars used to build the center — according to Beale, he ruled that out as an option, to avoid any conflict of interest because of his personal involvement in the project.

In exchange for joint ownership of a facility it didn’t pay a dime to build, the Chicago Parks District’s co-ownership means the jointly-owned facility is exempt from property taxes. That was essential for the project work out financially — according to David Doig, CEO of Chicago Neighborhood Initiatives, after a meeting with the county assessor’s office, the group figured a commercial property of this size might have had to pay in the ballpark of $400,000 a year in property taxes.

With that potential cost out of the picture, the project could move forward with the confidence that it wouldn’t experience any financial pressure to put rental prices out of reach for the surrounding community. (The parks district will also pick up some of the ongoing costs for the physical maintenance of the facility.)

Still, even with an opening ceremony surprise grant of $500,000 from Exelon, the joint facility still has about $2.5 million in loans left to pay off — to the Chicago Community Loan Fund, which also recently helped finance a major new tennis center on the South Side for XS Tennis, the tennis organization founded by the coach of 2017 U.S. Open Women’s Singles Champion Sloane Stephens.

“Some companies turned us down initially because they don’t do capital, but they do operating support,” Beale says. “Now we can go back to them, because I want to keep the price point down to where kids can afford and families can afford to come there without having to reach deep into their pockets.”

In exchange for the Chicago Housing Authority’s investment in the project, the Pullman Community Center also offers priority seating and fee waivers for public housing residents in its afterschool programming, team roster slots and other programs. The community center will also provide free shuttle busing to the three public housing communities in the area — home to an estimated 6,600 youth between ages 5 and 17.

“We’re meeting with [the housing authority] on Tuesday to set the shuttle schedule,” says Curtis.

Meanwhile, Curtis and her team are spending this week preparing for the facility’s first big soccer tournaments, scheduled for this weekend.

“We really want this to be a very positive experience for people, and for the standards to be high,” says Curtis. “For me, the customer service part of it, training the staff, the cleanliness of it, for people to feel much better walking out when they came in. On my side, that’s what keeps me up.”

Curtis, a Chicago native with a master’s degree in sports management from the University of Illinois-Chicago, has two children of her own, ages 9 and 10. She lives in the nearby Washington Heights neighborhood. Like Beale, she also has the less-tangible goals in mind for the new community center.

“When we go someplace, I’m really particular where I take [my children] because I want them to be treated the right way, so they can learn how to treat other people,” says Curtis. “So my goal for these children and people in the community is to let them know that they’re welcome here, they’re wanted here, treat them with respect and have them respect the facility but also give them the great customer service that they deserve in a clean environment, and not someplace that’s rundown.”